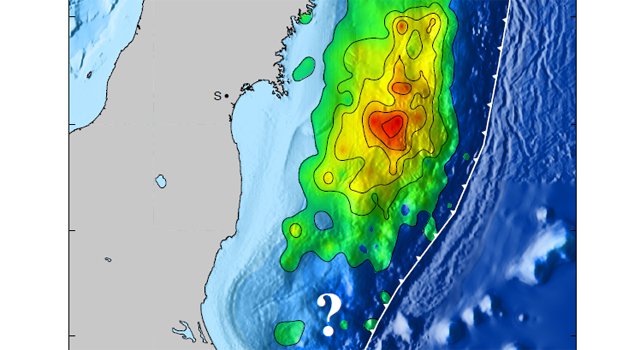 Image of the estimated fault slip due to the 9.0 Tohoku-Oki earthquake. The fault responsible for the quake dips under Japan, starting at the Japan Trench (indicated by the barbed line), the point of contact between the subducting Pacific Plate and the overriding Okhotsk Plate. The magnitude of fault slip is indicated both by the color and the contours, which are at 26-foot (8-meter) intervals. The question mark represents the researchers’ current lack of information about the seismic potential of the region south of the most recent event.
Credit: Caltech

A new NASA and university study of Japan’s massive March quake yields surprises on how the quake’s energy and stress were distributed in the region.

A new NASA and university study of the March 11, 2011, Japan earthquake that included researchers from NASA’s Jet Propulsion Laboratory, Pasadena, Calif., provides the most comprehensive look to date at how Earth moved that day, unleashing widespread destruction and a devastating tsunami.

The study of the magnitude 9.0 Tohoku-Oki quake, led by researchers at the California Institute of Technology in Pasadena, and published online in the May 19 issue of Science Express, details the first large set of observational data from this rare megathrust earthquake event.

The researchers used observations from a dense regional monitoring network that allows measurements of Earth movement to be gathered from GPS satellite data, along with globally distributed broadband seismographic networks and open-ocean tsunami data, to begin to construct models that describe how Earth moved due to the quake.

JPL researchers Susan Owen, Angelyn Moore and Frank Webb provided the GPS observations on which the study’s fault slip model was based. They analyzed the GPS data from Japan’s network and found the large horizontal and vertical movements that were used to determine where the earthquake ruptured the subduction zone fault.

Among the study’s findings:

The University of Michigan also participated in the study. The work was also funded by the Gordon and Betty Moore Foundation, National Science Foundation grants and the Southern California Earthquake Center.

More information is online at: http://media.caltech.edu/press_releases/13417 .