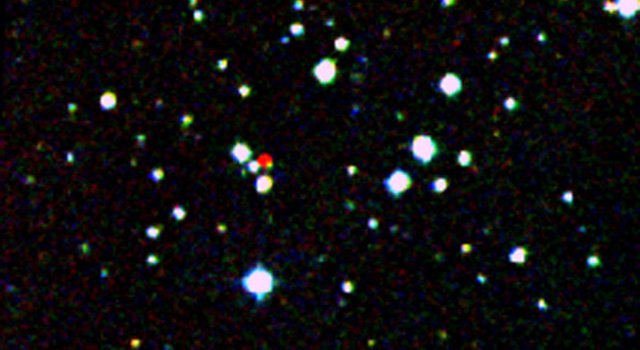 A nearby star stands out in red in this image from the Second Generation Digitized Sky Survey.› Full image and caption
Credit: DSS/NASA/JPL-Caltech 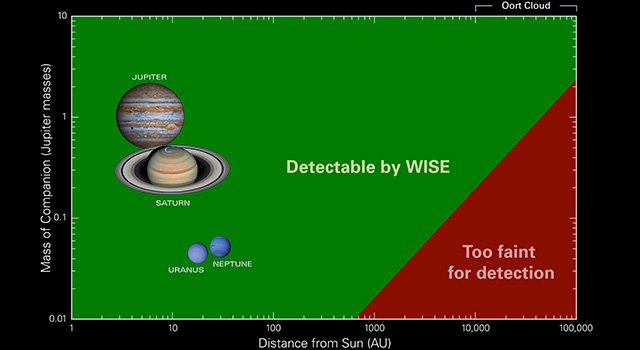 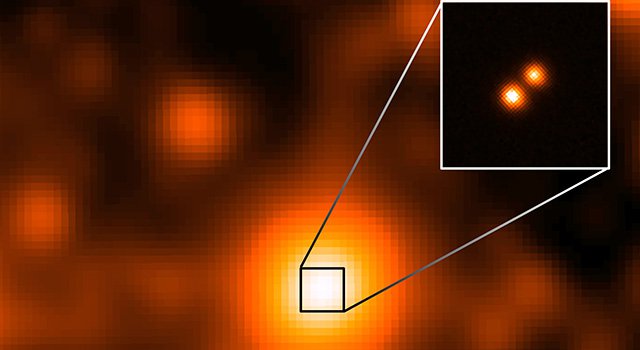 The third closest star system to the sun, called WISE J104915.57-531906, is at the center of the larger image, which was taken by NASA's Wide-field Infrared Survey Explorer (WISE).› Full image and caption
Credit: NASA/JPL/Gemini Observatory/AURA/NSF

NASA's WISE has turned up no evidence of the hypothesized celestial body in our solar system commonly dubbed "Planet X."

After searching hundreds of millions of objects across our sky, NASA's Wide-Field Infrared Survey Explorer (WISE) has turned up no evidence of the hypothesized celestial body in our solar system commonly dubbed "Planet X."

Researchers previously had theorized about the existence of this large, but unseen celestial body, suspected to lie somewhere beyond the orbit of Pluto. In addition to "Planet X," the body had garnered other nicknames, including "Nemesis" and "Tyche."

"The outer solar system probably does not contain a large gas giant planet, or a small, companion star," said Kevin Luhman of the Center for Exoplanets and Habitable Worlds at Penn State University, University Park, Pa., author of a paper in the Astrophysical Journal describing the results.

But searches of the WISE catalog are not coming up empty. A second study reveals several thousand new residents in our sun's "backyard," consisting of stars and cool bodies called brown dwarfs.

"Neighboring star systems that have been hiding in plain sight just jump out in the WISE data," said Ned Wright of the University of California, Los Angeles, the principal investigator of the mission.

The second WISE study, which concentrated on objects beyond our solar system, found 3,525 stars and brown dwarfs within 500 light-years of our sun.

"We're finding objects that were totally overlooked before," said Davy Kirkpatrick of NASA's Infrared and Processing Analysis Center at the California Institute of Technology, Pasadena, Calif. Kirkpatrick is lead author of the second paper, also in the Astrophysical Journal. Some of these 3,525 objects also were found in the Luhman study, which catalogued 762 objects.

The WISE mission operated from 2010 through early 2011, during which time it performed two full scans of the sky -- with essentially a six-month gap between scans. The survey captured images of nearly 750 million asteroids, stars and galaxies. In November 2013, NASA released data from the AllWISE program, which now enables astronomers to compare the two full-sky surveys to look for moving objects.

Despite the large number of new solar neighbors found by WISE, "Planet X" did not show up. Previous speculations about this hypothesized body stemmed in part from geological studies that suggested a regular timing associated with mass extinctions on Earth. The idea was that a large planet or small star hidden in the farthest reaches of our solar system might periodically sweep through bands of outer comets, sending them flying toward our planet. The Planet X-based mass extinction theories were largely ruled out even prior to the new WISE study.

Other theories based on irregular comet orbits had also postulated a Planet X-type body. The new WISE study now argues against these theories as well.

Both of the WISE searches were able to find objects the other missed, suggesting many other celestial bodies likely await discovery in the WISE data.

"We think there are even more stars out there left to find with WISE. We don't know our own sun's backyard as well as you might think," said Wright.

JPL managed and operated WISE for NASA's Science Mission Directorate. The mission was selected competitively under NASA's Explorers Program managed by the agency's Goddard Space Flight Center in Greenbelt, Md. The science instrument was built by the Space Dynamics Laboratory in Logan, Utah. The spacecraft was built by Ball Aerospace & Technologies Corp. in Boulder, Colo. Science operations and data processing take place at the Infrared Processing and Analysis Center at the California Institute of Technology in Pasadena. Caltech manages JPL for NASA. More information is online at: http://www.nasa.gov/wise and http://wise.astro.ucla.edu and http://jpl.nasa.gov/wise.
See animation of a fast-moving, nearby star