NASA's WISE Mission Warms Up but Keeps Chugging Along 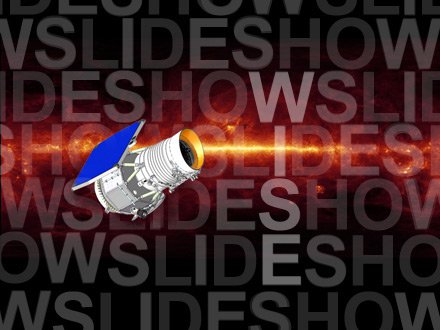 Members of the WISE science team compiled an image gallery of some of the mission's colorful cosmic snapshots. Flip through the gallery and vote for your favorite photos by clicking the "Your Pick" icon. 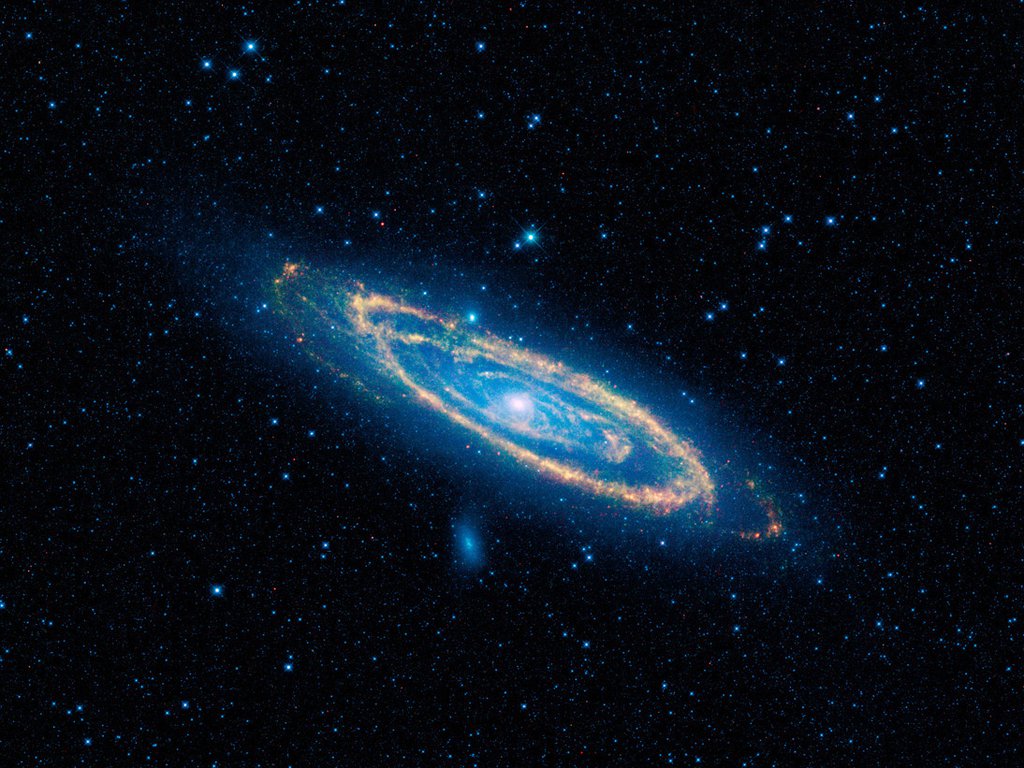 The immense Andromeda galaxy, also known as Messier 31 or simply M31, is captured in full. The mosaic covers an area equivalent to more than 100 full moons, or five degrees across the sky. › Full image and caption 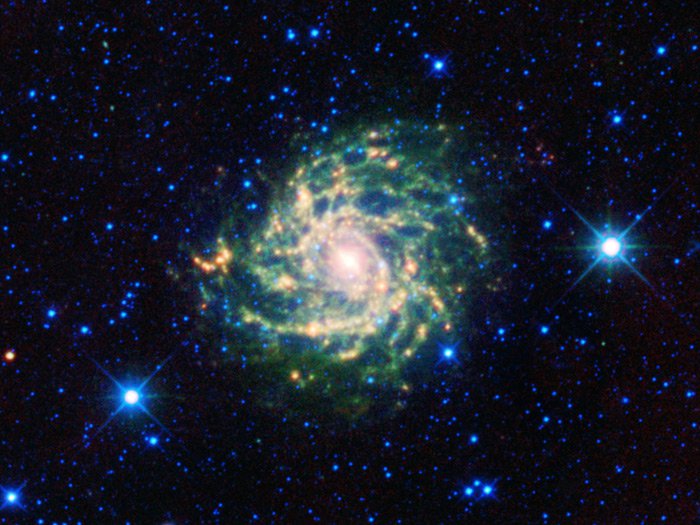 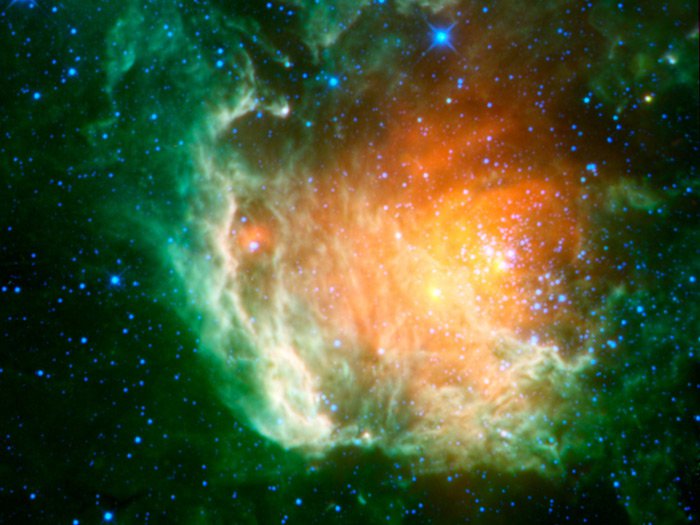 This image shows a cosmic rosebud blossoming with new stars. The stars, called the Berkeley 59 cluster, are the blue dots to the right of the image center. They are ripening out of the dust cloud from which they formed, and at just a few million years old, are young on stellar time scales. › Full image and caption 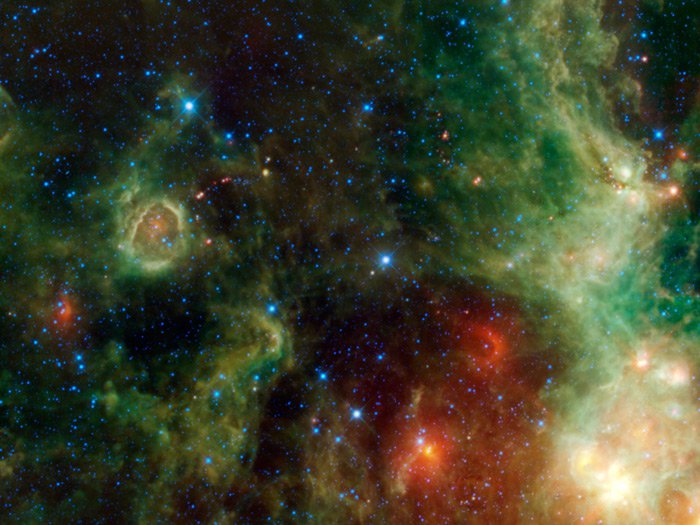 This is a view of the star-forming region IC 1795, located within the constellation Cassiopeia. This region appears dark and relatively devoid of stars in photographs taken in visible light, due to obscuring dust. The same dust glows brightly in the infrared images obtained by WISE. › Full image and caption 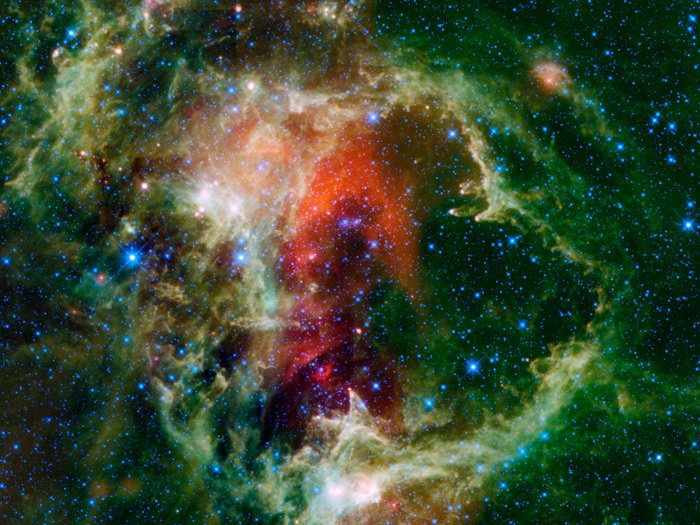 This cosmic cloud, known as the Soul nebula, is one of many sites of star formation within the Milky Way galaxy. It is located 3,800 light-years away from Earth and is nearly 240 light-years across. › Full image and caption

After completing its primary mission to map the infrared sky, NASA's Wide-field Infrared Survey Explorer, or WISE, has reached the expected end of its onboard supply of frozen coolant.

PASADENA, Calif. -- After completing its primary mission to map the infrared sky, NASA's Wide-field Infrared Survey Explorer, or WISE, has reached the expected end of its onboard supply of frozen coolant. Although WISE has 'warmed up,' NASA has decided the mission will still continue. WISE will now focus on our nearest neighbors -- the asteroids and comets traveling together with our solar system's planets around the sun.

"Two of our four infrared detectors still work even at warmer temperatures, so we can use those bands to continue our hunt for asteroids and comets," said Amy Mainzer of NASA's Jet Propulsion Laboratory in Pasadena, Calif. Mainzer is the principal investigator of the new phase of the mission, now known as the NEOWISE Post-Cryogenic Mission. It takes its name from the acronym for a near-Earth object, NEO, and WISE. A cryogen is a coolant used to make the detectors more sensitive. In the case of WISE, the cryogen was frozen hydrogen.

WISE launched Dec. 14, 2009, from Vandenberg Air Force Station in California aboard a Delta II launch vehicle. Its 40-centimeter (16-inch) infrared telescope scans the skies from an Earth-circling orbit crossing the poles. It has already snapped more than 1.8 million pictures at four infrared wavelengths. Currently, the survey has covered the sky about one-and-one-half times, producing a vast catalogue containing hundreds of millions of objects, from near-Earth asteroids to cool stars called "brown dwarfs," to distant, luminous galaxies.

To date, WISE has discovered 19 comets and more than 33,500 asteroids, including 120 near-Earth objects, which are those bodies with orbits that pass relatively close to Earth's path around the sun. More discoveries regarding objects outside our solar system, such as the brown dwarfs and luminous galaxies, are expected.

"The science data collected by WISE will be used by the scientific community for decades," said Jaya Bajpayee, the WISE program executive in the Astrophysics Division of NASA's Science Mission Directorate, at the agency's headquarters in Washington. "It will also provide a sky map for future observatories like NASA's James Webb Space Telescope."

The NEOWISE Post-Cryogenic Mission is designed to complete the survey of the solar system and finish the second survey of the rest of the sky at its new warmer temperature of about minus 203 degrees Celsius (minus 334 degrees Fahrenheit) using its two shortest-wavelength detectors. The survey extension will last one to four months, depending on early results.

NEOWISE will also keep observing other targets, such as the closest brown dwarfs to the sun. In addition, data from the second sky scan will help identify objects that have moved in the sky since they were first detected by WISE. This allows astronomers to pick out the brown dwarfs closest to our sun. The closer the object is, the more it will appear to move from our point of view.

The WISE science team now is analyzing millions of objects captured in the images, including many never seen before. A first batch of WISE data, covering more than half the sky, will be released to the astronomical community in spring 2011, with the rest to follow about one year later.

"WISE has provided a guidebook to the universe with thousands of targets worth viewing with a large telescope," said Edward (Ned) Wright, WISE principal investigator from UCLA. "We're working on figuring out just how far away the brown dwarfs are, and how luminous the galaxies are."

A gallery of WISE images is available at: http://www.nasa.gov/mission_pages/WISE/multimedia/gallery/gallery-index.html.

JPL manages the Wide-field Infrared Survey Explorer for the Science Mission Directorate. The science instrument was built by the Space Dynamics Laboratory in Logan, Utah, and the spacecraft was built by Ball Aerospace & Technologies Corp. in Boulder, Colo. Science operations and data processing take place at the Infrared Processing and Analysis Center at the California Institute of Technology in Pasadena.

More information is online at http://www.nasa.gov/wise and http://wise.astro.ucla.edu.
› Asteroid Watch