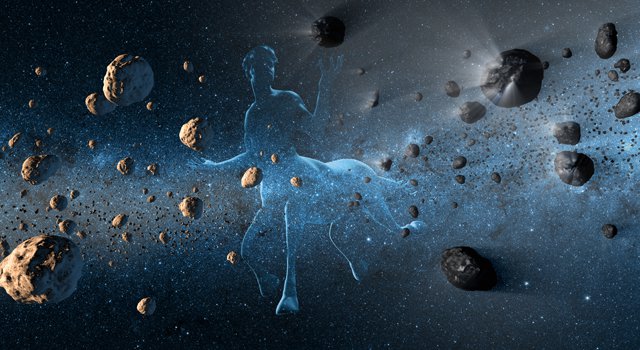 New observations from NASA's NEOWISE project reveal the hidden nature of centaurs, objects in our solar system that have confounded astronomers for resembling both asteroids and comets. The centaurs, which orbit between Jupiter and Neptune, were named after the mythical half-horse, half-human creatures called centaurs due to their dual nature. This artist's concept shows a centaur creature together with asteroids on the left and comets at right.› Full image and caption
Credit: NASA/JPL-Caltech

The true identity of centaurs, the small celestial bodies orbiting the sun between Jupiter and Neptune, is one of the enduring mysteries of astrophysics.

PASADENA, Calf. -- The true identity of centaurs, the small celestial bodies orbiting the sun between Jupiter and Neptune, is one of the enduring mysteries of astrophysics. Are they asteroids or comets? A new study of observations from NASA's Wide-field Infrared Survey Explorer (WISE) finds most centaurs are comets.

Until now, astronomers were not certain whether centaurs are asteroids flung out from the inner solar system or comets traveling in toward the sun from afar. Because of their dual nature, they take their name from the creature in Greek mythology whose head and torso are human and legs are those of a horse.

"Just like the mythical creatures, the centaur objects seem to have a double life," said James Bauer of NASA's Jet Propulsion Laboratory in Pasadena, Calif. Bauer is lead author of a paper published online July 22 in the Astrophysical Journal. "Our data point to a cometary origin for most of the objects, suggesting they are coming from deeper out in the solar system."

"Cometary origin" means an object likely is made from the same material as a comet, may have been an active comet in the past, and may be active again in the future.

Although astronomers previously observed some centaurs with dusty halos, a common feature of outgassing comets, and NASA's Spitzer Space Telescope also found some evidence for comets in the group, they had not been able to estimate the numbers of comets and asteroids.

Infrared data from NEOWISE provided information on the objects' albedos, or reflectivity, to help astronomers sort the population. NEOWISE can tell whether a centaur has a matte and dark surface or a shiny one that reflects more light. The puzzle pieces fell into place when astronomers combined the albedo information with what was already known about the colors of the objects. Visible-light observations have shown centaurs generally to be either blue-gray or reddish in hue. A blue-gray object could be an asteroid or comet. NEOWISE showed that most of the blue-gray objects are dark, a telltale sign of comets. A reddish object is more likely to be an asteroid.

"Comets have a dark, soot-like coating on their icy surfaces, making them darker than most asteroids," said the study's co-author, Tommy Grav of the Planetary Science Institute in Tucson, Ariz. "Comet surfaces tend to be more like charcoal, while asteroids are usually shinier like the moon."

The results indicate that roughly two-thirds of the centaur population are comets, which come from the frigid outer reaches of our solar system. It is not clear whether the rest are asteroids. The centaur bodies have not lost their mystique entirely, but future research from NEOWISE may reveal their secrets further.

JPL, managed by the California Institute of Technology in Pasadena, managed and operated WISE for NASA's Science Mission Directorate. The NEOWISE portion of the project was funded by NASA's Near Earth Object Observation Program. WISE completed its key mission objective, two scans of the entire sky, in 2011 and has been hibernating in space since then.

For more information about the WISE mission, visit: http://www.nasa.gov/wise .