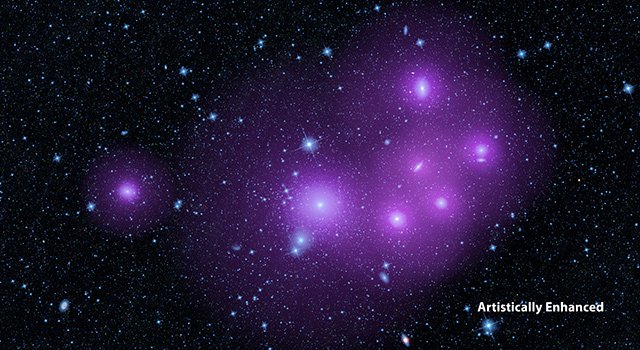 Active, supermassive black holes at the hearts of galaxies tend to fall into two categories: those that are hidden by dust, and those that are exposed.› Full image and caption
Credit: NASA/JPL-Caltech

This infographic explains a popular theory of active supermassive black holes, referred to as the unified model -- and how new data from NASA's Wide-field Infrared Survey Explorer, or WISE, is at conflict with the model.› Full image and caption
Credit: NASA/JPL-Caltech/NOAO/AURA/NSF/ESO

A survey of more than 170,000 supermassive black holes by NASA's WISE challenges an old theory.

A survey of more than 170,000 supermassive black holes, using NASA's Wide-field Infrared Survey Explorer (WISE), has astronomers reexamining a decades-old theory about the varying appearances of these interstellar objects.

The unified theory of active, supermassive black holes, first developed in the late 1970s, was created to explain why black holes, though similar in nature, can look completely different. Some appear to be shrouded in dust, while others are exposed and easy to see.

However, the new WISE results do not corroborate this theory. The researchers found evidence that something other than a doughnut structure may, in some circumstances, determine whether a black hole is visible or hidden. The team has not yet determined what this may be, but the results suggest the unified, or doughnut, model does not have all the answers.

"Our finding revealed a new feature about active black holes we never knew before, yet the details remain a mystery," said Lin Yan of NASA's Infrared Processing and Analysis Center (IPAC), based at the California Institute of Technology in Pasadena. "We hope our work will inspire future studies to better understand these fascinating objects."

Yan is the second author of the research accepted for publication in the Astrophysical Journal. The lead author is a post-doctoral researcher, Emilio Donoso, who worked with Yan at IPAC and has since moved to the Instituto de Ciencias Astronómicas, de la Tierra y del Espacio in Argentina. The research also was co-authored by Daniel Stern at NASA's Jet Propulsion Laboratory in Pasadena, California, and Roberto Assef of Universidad Diego Portales in Chile and formerly of JPL.

Every galaxy has a massive black hole at its heart. The new study focuses on the "feeding" ones, called active, supermassive black holes, or active galactic nuclei. These black holes gorge on surrounding gas material that fuels their growth.

With the aid of computers, scientists were able to pick out more than 170,000 active supermassive black holes from the WISE data. They then measured the clustering of the galaxies containing both hidden and exposed black holes -- the degree to which the objects clump together across the sky.

If the unified model were true, and the hidden black holes are simply blocked from view by doughnuts in the edge-on configuration, then researchers would expect them to cluster in the same way as the exposed ones. According to theory, since the doughnut structures would take on random orientations, the black holes should also be distributed randomly. It is like tossing a bunch of glazed doughnuts in the air -- roughly the same percentage of doughnuts always will be positioned in the edge-on and face-on positions, regardless of whether they are tightly clumped or spread far apart.

But WISE found something totally unexpected. The results showed the galaxies with hidden black holes are more clumped together than those of the exposed black holes. If these findings are confirmed, scientists will have to adjust the unified model and come up with new ways to explain why some black holes appear hidden.

"The main purpose of unification was to put a zoo of different kinds of active nuclei under a single umbrella," said Donoso. Now, that has become increasingly complex to do as we dig deeper into the WISE data."

Another way to understand the WISE results involves dark matter. Dark matter is an invisible substance that dominates matter in the universe, outweighing the regular matter that makes up people, planets and stars. Every galaxy sits in the center of a dark matter halo. Bigger halos have more gravity and, therefore, pull other galaxies toward them.

Because WISE found that the obscured black holes are more clustered than the others, the researchers know those hidden black holes reside in galaxies with larger dark matter halos. Though the halos themselves would not be responsible for hiding the black holes, they could be a clue about what is occurring.

"The unified theory was proposed to explain the complexity of what astronomers were seeing," said Stern. "It seems that simple model may have been too simple. As Einstein said, models should be made 'as simple as possible, but not simpler.'"

Scientists still are actively combing public data from WISE, which was put into hibernation in 2011 after scanning Earth's entire sky twice. WISE was reactivated in 2013, renamed NEOWISE, and given a new mission to identify potentially hazardous near-Earth objects.