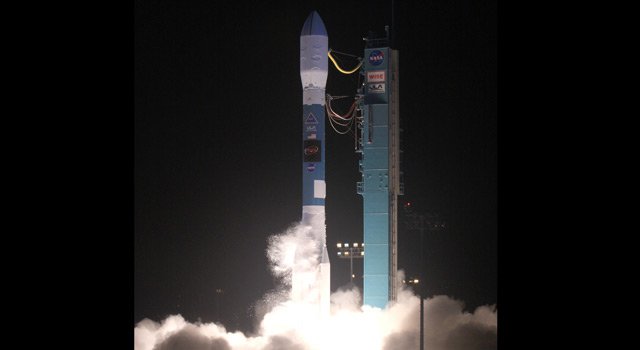 NASA's Wide-field Infrared Survey Explorer, or WISE, lifted off over the Pacific Ocean this morning on its way to map the entire sky in infrared light.

VANDENBERG AIR FORCE BASE, Calif. -- NASA's Wide-field Infrared Survey Explorer, or WISE, lifted off over the Pacific Ocean this morning on its way to map the entire sky in infrared light.

A Delta II rocket carrying the spacecraft launched at 6:09 a.m. PST (9:09 a.m. EST) from Vandenberg Air Force Base in California. The rocket deposited WISE into a polar orbit 326 miles above Earth.

"WISE thundered overhead, lighting up the pre-dawn skies," said William Irace, the mission's project manager at NASA's Jet Propulsion Laboratory in Pasadena, Calif. "All systems are looking good, and we are on our way to seeing the entire infrared sky better than ever before."

Engineers acquired a signal from the spacecraft via NASA's Tracking and Data Relay Satellite System just 10 seconds after the spacecraft separated from the rocket. Approximately three minutes later, WISE re-oriented itself with its solar panels facing the sun to generate its own power. The next major event occurred about 17 minutes later. Valves on the cryostat, a chamber of super-cold hydrogen ice that cools the WISE instrument, opened. Because the instrument sees the infrared, or heat, signatures of objects, it must be kept at chilly temperatures. Its coldest detectors are less than minus 447 degrees Fahrenheit.

"WISE needs to be colder than the objects it's observing," said Ned Wright of UCLA, the mission's principal investigator. "Now we're ready to see the infrared glow from hundreds of thousands of asteroids, and hundreds of millions of stars and galaxies."

With the spacecraft stable, cold and communicating with mission controllers at JPL, a month-long checkout and calibration is underway.

WISE will see the infrared colors of the whole sky with sensitivity and resolution far better than the last infrared sky survey, performed 26 years ago. The space telescope will spend nine months scanning the sky once, then one-half the sky a second time. The primary mission will end when WISE's frozen hydrogen runs out, about 10 months after launch.

Just about everything in the universe glows in infrared, which means the mission will catalog a variety of astronomical targets. Near-Earth asteroids, stars, planet-forming disks and distant galaxies all will be easy for the mission to see. Hundreds of millions of objects will populate the WISE atlas, providing astronomers and other space missions, such as NASA's planned James Webb Space Telescope, with a long-lasting infrared roadmap.

JPL manages the Wide-field Infrared Survey Explorer for NASA's Science Mission Directorate in Washington. The mission was competitively selected under the Explorers Program, managed by NASA's Goddard Space Flight Center in Greenbelt, Md. The science instrument was built by the Space Dynamics Laboratory in Logan, Utah, and the spacecraft was built by Ball Aerospace & Technologies Corp. in Boulder, Colo. Science operations and data processing take place at the Infrared Processing and Analysis Center at the California Institute of Technology in Pasadena. NASA's Launch Services Program at NASA's Kennedy Space Center, Fla., managed the payload integration and the launch service.