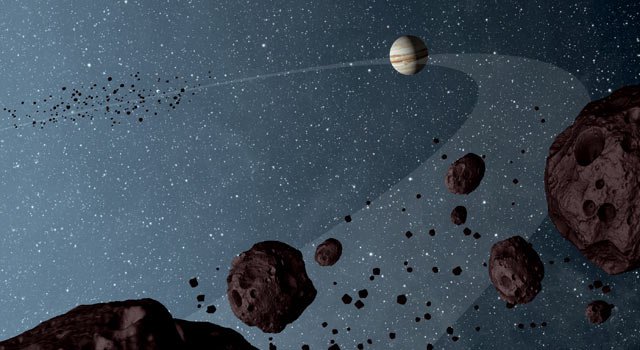 New results from NASA's Wide-field Infrared Explorer, or WISE, reveal that the Jovian Trojans -- asteroids that lap the sun in the same orbit as Jupiter -- are uniformly dark with a hint of burgundy color, and have matte surfaces that reflect little sunlight.› Full image and caption
Credit: NASA/JPL-Caltech

Observations from NASA's WISE all-sky survey reveal new clues about Jovian Trojans, mysterious asteroids that orbit in front of and behind Jupiter in its path around the sun.

Scientists using data from NASA's Wide-field Infrared Survey Explorer, or WISE, have uncovered new clues in the ongoing mystery of the Jovian Trojans -- asteroids that orbit the sun on the same path as Jupiter. Like racehorses, the asteroids travel in packs, with one group leading the way in front of the gas giant, and a second group trailing behind.

The observations are the first to get a detailed look at the Trojans' colors: both the leading and trailing packs are made up of predominantly dark, reddish rocks with a matte, non-reflecting surface. What's more, the data verify the previous suspicion that the leading pack of Trojans outnumbers the trailing bunch.

The new results offer clues in the puzzle of the asteroids' origins. Where did the Trojans come from? What are they made of? WISE has shown that the two packs of rocks are strikingly similar and do not harbor any "out-of-towners," or interlopers, from other parts of the solar system. The Trojans do not resemble the asteroids from the main belt between Mars and Jupiter, nor the Kuiper belt family of objects from the icier, outer regions near Pluto.

"Jupiter and Saturn are in calm, stable orbits today, but in their past, they rumbled around and disrupted any asteroids that were in orbit with these planets," said Tommy Grav, a WISE scientist from the Planetary Science Institute in Tucson, Ariz. "Later, Jupiter re-captured the Trojan asteroids, but we don't know where they came from. Our results suggest they may have been captured locally. If so, that's exciting because it means these asteroids could be made of primordial material from this particular part of the solar system, something we don't know much about." Grav is a member of the NEOWISE team, the asteroid-hunting portion of the WISE mission.

The first Trojan was discovered on Feb. 22, 1906, by German astronomer Max Wolf, who found the celestial object leading ahead of Jupiter. Christened "Achilles" by the astronomer, the roughly 81-mile-wide (130-kilometer-wide) chunk of space rock was the first of many asteroids detected to be traveling in front of the gas giant. Later, asteroids were also found trailing behind Jupiter. The asteroids were collectively named Trojans after a legend, in which Greek soldiers hid inside in a giant horse statue to launch a surprise attack on the Trojan people of the city of Troy.

"The two asteroid camps even have their own 'spy,'" said Grav. "After having discovered a handful of Trojans, astronomers decided to name the asteroid in the leading camp after the Greek heroes and the ones in the trailing after the heroes of Troy. But each of the camps already had an 'enemy' in their midst, with asteroid 'Hector' in the Greek camp and 'Patroclus' in the Trojan camp."

Other planets were later found to have Trojan asteroids riding along with them too, such as Mars, Neptune and even Earth, where WISE recently found the first known Earth Trojan: http://www.jpl.nasa.gov/news/news.php?release=2011-230 .

Before WISE, the main uncertainty defining the population of Jupiter Trojans was just how many individual chunks were in these clouds of space rock and ice leading Jupiter, and how many were trailing. It is believed that there are as many objects in these two swarms leading and trailing Jupiter as there are in the entirety of the main asteroid belt between Mars and Jupiter.

To put this and other theories to bed requires a well-coordinated, well-executed observational campaign. But there were many things in the way of accurate observations -- chiefly, Jupiter itself. The orientation of these Jovian asteroid clouds in the sky in the last few decades has been an impediment to observations. One cloud is predominantly in Earth's northern sky, while the other is in the southern, forcing ground-based optical surveys to use at least two different telescopes. The surveys generated results, but it was unclear whether a particular result was caused by the problems of having to observe the two clouds with different instruments, and at different times of the year.

Enter WISE, which roared into orbit on Dec. 14, 2009. The spacecraft's 16-inch (40-centimeter) telescope and infrared cameras scoured the entire sky looking for the glow of celestial heat sources. From January 2010 to February 2011, about 7,500 images were taken every day. The NEOWISE project used the data to catalogue more than 158,000 asteroids and comets throughout the solar system.

"By obtaining accurate diameter and surface reflectivity measurements on 1,750 Jupiter Trojans, we increased by an order of magnitude what we knew about these two gatherings of asteroids," said Grav. "With this information, we were able to more accurately than ever confirm there are indeed almost 40 percent more objects in the leading cloud."

Trying to understand the surface or interior of a Jovian Trojan is also difficult. The WISE suite of infrared detectors was sensitive to the thermal glow of the objects, unlike visible-light telescopes. This means WISE can provide better estimates of their surface reflectivity, or albedo, in addition to more details about their visible and infrared colors (in astronomy "colors" can refer to types of light beyond the visible spectrum).

"Seeing asteroids with WISE's many wavelengths is like the scene in 'The Wizard of Oz,' where Dorothy goes from her black-and-white world into the Technicolor land of Oz," said Amy Mainzer, the principal investigator of the NEOWISE project at NASA's Jet Propulsion Laboratory in Pasadena, Calif. "Because we can see farther into the infrared portion of the light spectrum, we can see more details of the asteroids' colors, or, in essence, more shades or hues."

The NEOWISE team has analyzed the colors of 400 Trojan asteroids so far, allowing many of these asteroids to be properly sorted according to asteroid classification schemes for the first time.

"We didn't see any ultra-red asteroids, typical of the main belt and Kuiper belt populations," said Grav. "Instead, we find a largely uniform population of what we call D-type asteroids, which are dark burgundy in color, with the rest being C- and P-type, which are more grey-bluish in color. More research is needed, but it's possible we are looking at the some of the oldest material known in the solar system."

Scientists have proposed a future space mission to the Jupiter Trojans that will gather the data needed to determine their age and origins.

The results were presented today at the 44th annual meeting of the Division for Planetary Sciences of the American Astronomical Society in Reno, Nev. Two studies detailing this research are accepted for publication in the Astrophysical Journal.

JPL manages, and operated, WISE for NASA's Science Mission Directorate. The spacecraft was put into hibernation mode in 2011, after it scanned the entire sky twice, completing its main objectives. Edward Wright is the principal investigator and is at UCLA. The mission was selected competitively under NASA's Explorers Program managed by the agency's Goddard Space Flight Center in Greenbelt, Md. The science instrument was built by the Space Dynamics Laboratory in Logan, Utah. The spacecraft was built by Ball Aerospace & Technologies Corp. in Boulder, Colo. Science operations and data processing take place at the Infrared Processing and Analysis Center at the California Institute of Technology in Pasadena. Caltech manages JPL for NASA. More information is online at http://www.nasa.gov/wise , http://wise.astro.ucla.edu and http://jpl.nasa.gov/wise .