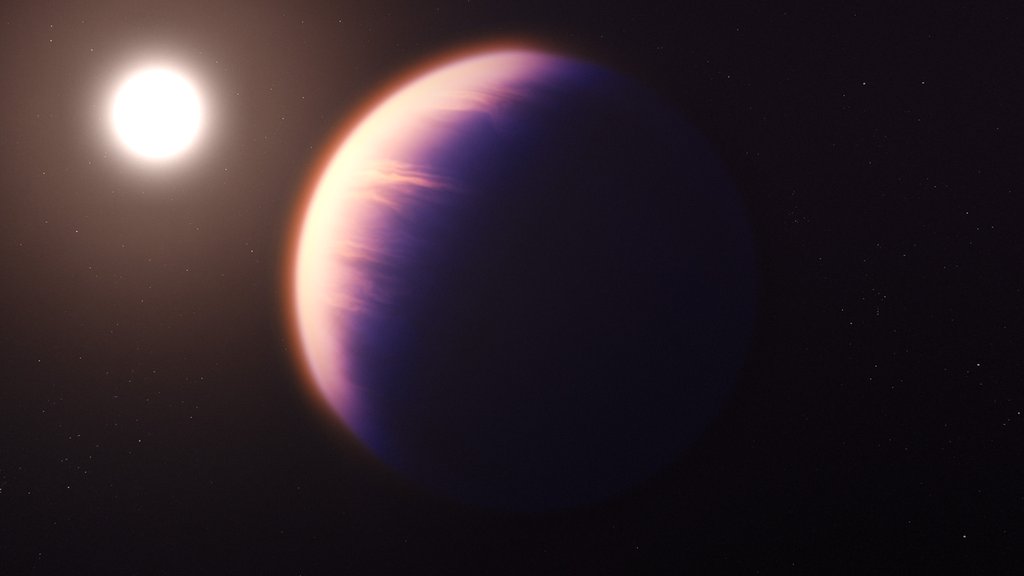 This illustration shows what exoplanet WASP-39 b could look like, based on current understanding of the planet. WASP-39 b is a hot, puffy gas giant with a mass 0.28 times Jupiter (0.94 times Saturn) and a diameter 1.3 times greater than Jupiter.

Webb ushers in a new era of exoplanet science with the first unequivocal detection of carbon dioxide in a planetary atmosphere outside our solar system.

NASA’s James Webb Space Telescope has captured the first clear evidence for carbon dioxide in the atmosphere of a planet outside the solar system. This observation of a gas giant planet orbiting a Sun-like star 700 light-years away provides important insights into the composition and formation of the planet. The finding, which is accepted for publication in Nature, offers evidence that in the future Webb may be able to detect and measure carbon dioxide in the thinner atmospheres of smaller, rocky planets.

WASP-39 b is a hot gas giant with a mass roughly one-quarter that of Jupiter (about the same as Saturn) and a diameter 1.3 times greater than Jupiter’s. Its extreme puffiness is related in part to its high temperature (about 1,600 degrees Fahrenheit, or 900 degrees Celsius). Unlike the cooler, more compact gas giants in our solar system, WASP-39 b orbits very close to its star – only about one-eighth the distance between the Sun and Mercury – completing one circuit in just over four Earth days. The planet’s discovery, reported in 2011, was made based on ground-based detections of the subtle, periodic dimming of light from its host star as the planet transits, or passes in front of the star. 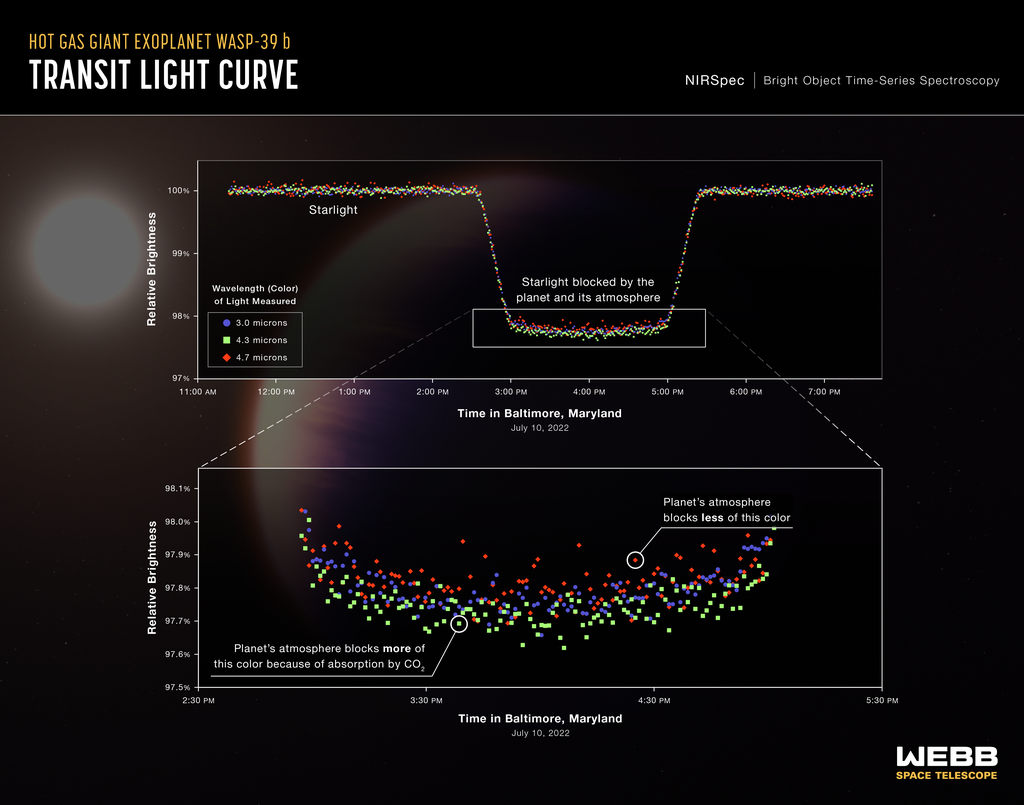 A series of light curves from Webb’s Near-Infrared Spectrograph (NIRSpec) shows the change in brightness of three different wavelengths (colors) of light from the WASP-39 star system over time as the planet transited the star July 10, 2022.

Previous observations from other telescopes, including NASA’s Hubble and Spitzer space telescopes, revealed the presence of water vapor, sodium, and potassium in the planet’s atmosphere. Webb’s unmatched infrared sensitivity has now confirmed the presence of carbon dioxide on this planet as well.

Transiting planets like WASP-39 b, whose orbits we observe edge-on rather than from above, can provide researchers with ideal opportunities to probe planetary atmospheres.

During a transit, some of the starlight is eclipsed by the planet completely (causing the overall dimming) and some is transmitted through the planet’s atmosphere. 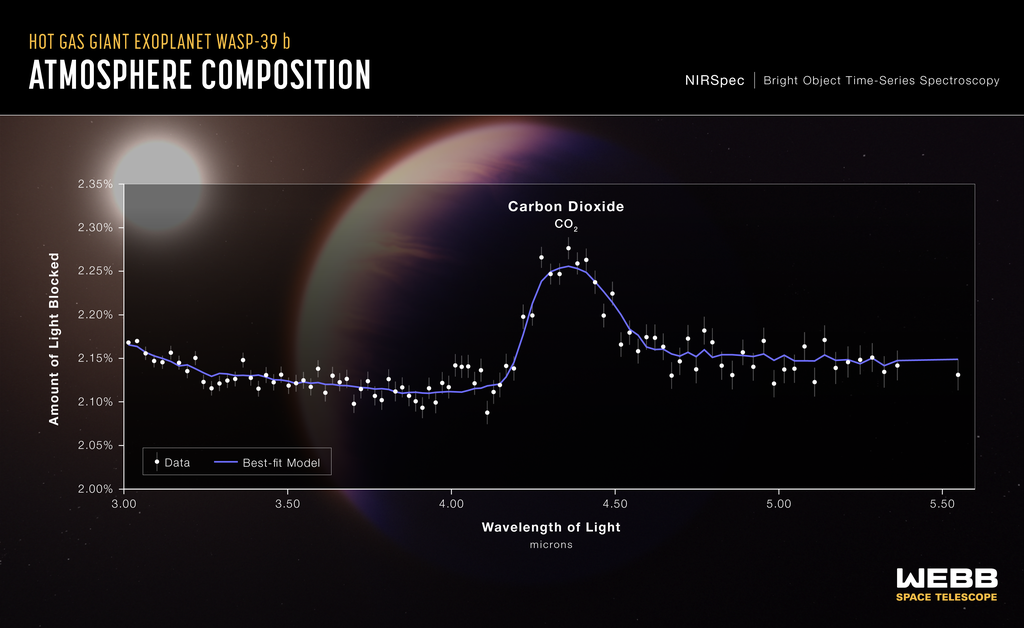 Because different gases absorb different combinations of colors, researchers can analyze small differences in brightness of the transmitted light across a spectrum of wavelengths to determine exactly what an atmosphere is made of. With its combination of inflated atmosphere and frequent transits, WASP-39 b is an ideal target for transmission spectroscopy.

The research team used Webb’s Near-Infrared Spectrograph (NIRSpec) for its observations of WASP-39 b. In the resulting spectrum of the exoplanet’s atmosphere, a small hill between 4.1 and 4.6 microns presents the first clear, detailed evidence for carbon dioxide ever detected in a planet outside the solar system.

“As soon as the data appeared on my screen, the whopping carbon dioxide feature grabbed me,” said Zafar Rustamkulov, a graduate student at Johns Hopkins University and member of the JWST Transiting Exoplanet Community Early Release Science team, which undertook this investigation. “It was a special moment, crossing an important threshold in exoplanet sciences.”

No observatory has ever measured such subtle differences in brightness of so many individual colors across the 3- to 5.5-micron range in an exoplanet transmission spectrum before. Access to this part of the spectrum is crucial for measuring abundances of gases like water and methane, as well as carbon dioxide, which are thought to exist in many different types of exoplanets.

“Detecting such a clear signal of carbon dioxide on WASP-39 b bodes well for the detection of atmospheres on smaller, terrestrial-sized planets,” said Natalie Batalha of the University of California at Santa Cruz, who leads the team.

Understanding the composition of a planet’s atmosphere is important because it tells us something about the origin of the planet and how it evolved. “Carbon dioxide molecules are sensitive tracers of the story of planet formation,” said Mike Line of Arizona State University, another member of this research team. “By measuring this carbon dioxide feature, we can determine how much solid versus how much gaseous material was used to form this gas giant planet. In the coming decade, JWST will make this measurement for a variety of planets, providing insight into the details of how planets form and the uniqueness of our own solar system.”

This NIRSpec prism observation of WASP-39 b is just one part of a larger investigation that includes observations of the planet using multiple Webb instruments, as well as observations of two other transiting planets. The investigation, which is part of the Early Release Science program, was designed to provide the exoplanet research community with robust Webb data as soon as possible.

“The goal is to analyze the Early Release Science observations quickly and develop open-source tools for the science community to use,” explained Vivien Parmentier, a co-investigator from Oxford University. “This enables contributions from all over the world and ensures that the best possible science will come out of the coming decades of observations.”

The James Webb Space Telescope is the world’s premier space science observatory. Webb will solve mysteries in our solar system, look beyond to distant worlds around other stars, and probe the mysterious structures and origins of our universe and our place in it. Webb is an international program led by NASA with its partners, ESA (European Space Agency) and the Canadian Space Agency.