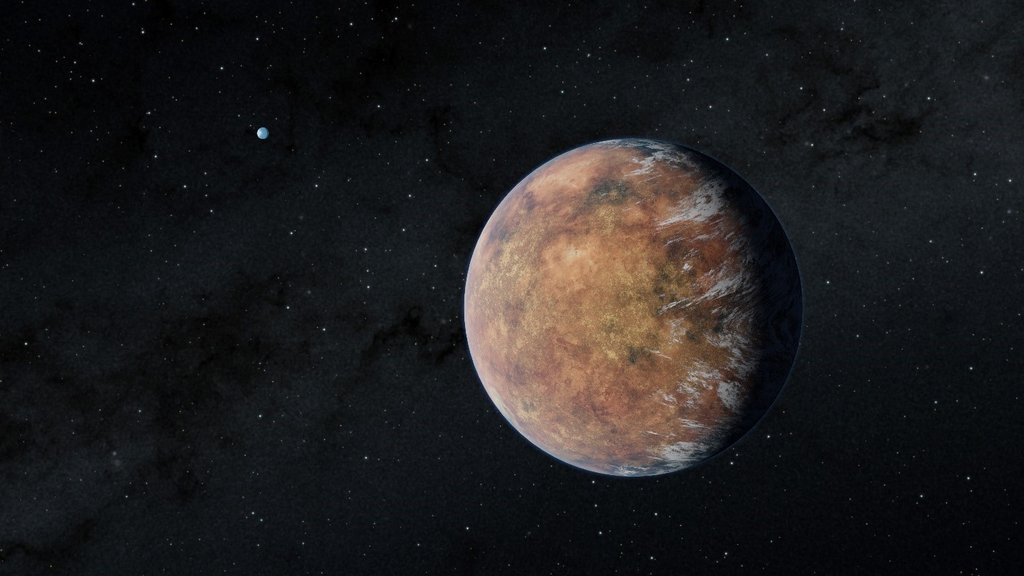 Newly discovered Earth-size planet TOI 700 e orbits within the habitable zone of its star in this illustration. Its Earth-size sibling, TOI 700 d, can be seen in the distance.

The newly discovered planet and its Earth-size sibling are both in the habitable zone, where liquid water could potentially exist on their surfaces.

Using data from NASA’s Transiting Exoplanet Survey Satellite, scientists have identified an Earth-size world, called TOI 700 e, orbiting within the habitable zone of its star – the range of distances where liquid water could occur on a planet’s surface. The world is 95% Earth’s size and likely rocky.

“This is one of only a few systems with multiple, small, habitable-zone planets that we know of,” said Emily Gilbert, a postdoctoral fellow at NASA’s Jet Propulsion Laboratory in Southern California who led the work. “That makes the TOI 700 system an exciting prospect for additional follow-up. Planet e is about 10% smaller than planet d, so the system also shows how additional TESS observations help us find smaller and smaller worlds.”

Gilbert presented the result on behalf of her team at the 241st meeting of the American Astronomical Society in Seattle. A paper about the newly discovered planet was accepted by The Astrophysical Journal Letters.

Watch to learn about TOI 700 e, a newly discovered Earth-size planet with an Earth-size sibling.

TOI 700 is a small, cool M dwarf star located around 100 light-years away in the southern constellation Dorado. In 2020, Gilbert and others announced the discovery of the Earth-size, habitable-zone planet d, which is on a 37-day orbit, along with two other worlds.

The innermost planet, TOI 700 b, is about 90% Earth’s size and orbits the star every 10 days. TOI 700 c is over 2.5 times bigger than Earth and completes an orbit every 16 days. The planets are probably tidally locked, which means they spin only once per orbit such that one side always faces the star, just as one side of the Moon is always turned toward Earth.

TESS monitors large swaths of the sky, called sectors, for approximately 27 days at a time. These long stares allow the satellite to track changes in stellar brightness caused by a planet crossing in front of its star from our perspective, an event called a transit. The mission used this strategy to observe the southern sky starting in 2018, before turning to the northern sky. In 2020, it returned to the southern sky for additional observations. The extra year of data allowed the team to refine the original planet sizes, which are about 10% smaller than initial calculations.

“If the star was a little closer or the planet a little bigger, we might have been able to spot TOI 700 e in the first year of TESS data,” said Ben Hord, a doctoral candidate at the University of Maryland, College Park and a graduate researcher at NASA’s Goddard Space Flight Center in Greenbelt, Maryland. “But the signal was so faint that we needed the additional year of transit observations to identify it.”

TOI 700 e, which may also be tidally locked, takes 28 days to orbit its star, placing planet e between planets c and d in the so-called optimistic habitable zone.

Scientists define the optimistic habitable zone as the range of distances from a star where liquid surface water could be present at some point in a planet’s history. This area extends to either side of the conservative habitable zone, the range where researchers hypothesize liquid water could exist over most of the planet’s lifetime. TOI 700 d orbits in this region.

Finding other systems with Earth-size worlds in this region helps planetary scientists learn more about the history of our own solar system.

Follow-up study of the TOI 700 system with space- and ground-based observatories is ongoing, Gilbert said, and may yield further insights into this rare system.

“TESS just completed its second year of northern sky observations,” said Allison Youngblood, a research astrophysicist and the TESS deputy project scientist at Goddard. “We’re looking forward to the other exciting discoveries hidden in the mission’s treasure trove of data.”

TESS is a NASA Astrophysics Explorer mission led and operated by Massachusetts Institute of Technology in Cambridge, Massachusetts, and managed by NASA’s Goddard Space Flight Center. Additional partners include Northrop Grumman, based in Falls Church, Virginia; NASA’s Ames Research Center in California’s Silicon Valley; the Center for Astrophysics | Harvard & Smithsonian in Cambridge, Massachusetts; MIT’s Lincoln Laboratory; and the Space Telescope Science Institute in Baltimore. More than a dozen universities, research institutes, and observatories worldwide are participants in the mission.