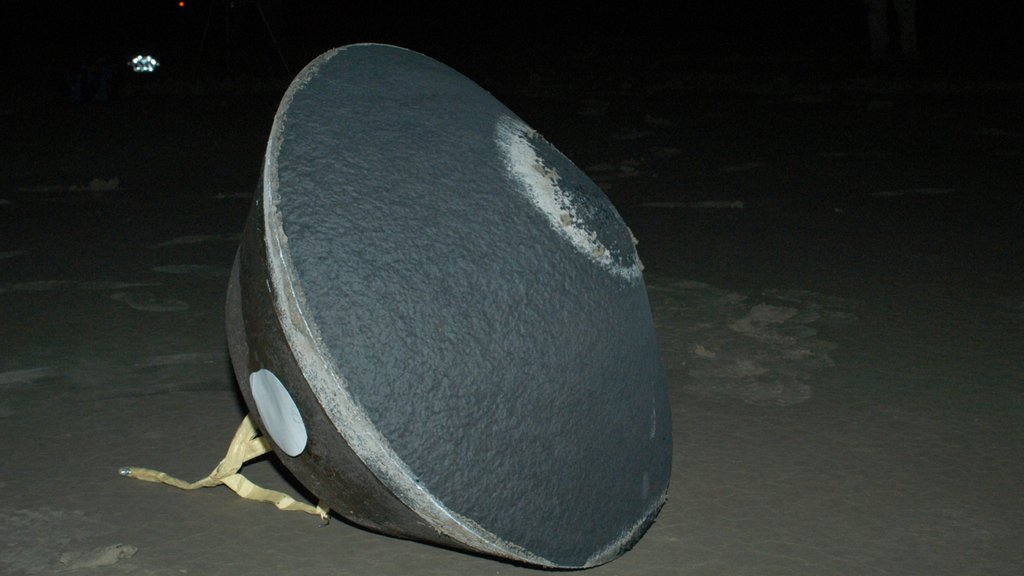 The Stardust capsule carried precious cargo that revolutionized our understanding of comets.

It was less than an hour into the new day of January 15, 2006 (EST), when tens of thousands of miles above our planet, two cable cutters and two retention bolts fired, releasing a spring which pushed a 101-pound (46-kilogram) sample return capsule away from its mother ship. Later, during its final plunge Earthward, the capsule would become the fastest human-made object to enter our atmosphere, achieving a velocity of about 28,600 mph (12.8 kilometers per second).

Then, at 5:10 a.m. EST (3:10 a.m. MST), for the first time in seven years, the sample return capsule finally stopped moving. By the time it landed, under parachute in the desert salt flats of the U.S. Air Force's Utah Test and Training Range in Dugway, the capsule had travelled 2.88 billion miles (4.5 billion kilometers) -- a journey that carried it around the sun three times and as far out as halfway to Jupiter. Inside the Stardust mission's graphite-epoxy covered capsule was the objective of its prime mission -- humanity's first samples collected from a celestial body in deep space (beyond the Earth-moon system).

"The Stardust sample return capsule carried inside cometary material it gathered from comet Wild-2 during a flyby in January of 2004," said Don Brownlee, Stardust principal investigator from the University of Washington, Seattle. "The spacecraft deployed a tennis racket-like, aerogel-lined collector, and we flew the spacecraft within 150 miles (241 kilometers), capturing particles from the coma as we went."

Two days after the return, the sample return capsule's science canister and its cargo of comet and interstellar dust particles was stowed inside a special aluminum carrying case and transported to a curatorial facility at NASA's Johnson Space Center in Houston. Eileen Stansbery -- now Chief Scientist at Johnson -- worked on Stardust as the deputy director of Astromaterials Research and Exploration Science at the time. "We were investigating big questions with the smallest samples -- how did our solar system form? What are we made of? This comet is representative of one of the most primitive bodies in the solar system, preserving the earliest record of material from the nebula during the 'planetesimal' forming stage in its evolution."

Brownlee notes, "The science team couldn't wait to get their hands on the samples. It had been 10 years of planning and then seven more years for the actual mission, so everyone was raring to go."

The Stardust mission's international team of scientists -- 200 strong -- helped re-write the book on comets and the evolution of the solar system. The Stardust mission samples indicated that some comets may have included materials ejected from the early sun and may have formed very differently than scientists had theorized.

"What we found was remarkable," said Brownlee. "Instead of rocky materials that formed around previous generations of stars, we found that most of the comet's rocky matter formed inside our solar system at extremely high temperature. In great contrast to its ice, our comet's rocky material had formed under white-hot conditions."

Comet ice formed in cold regions beyond the planet Neptune, but the rocks, probably the bulk of any comet's mass, formed much closer to the sun in regions hot enough to evaporate bricks. The materials that Stardust collected from comet Wild-2 contain pre-solar "stardust" grains, identified on the basis of their unusual isotopic composition, but these grains are very rare.

"Even though we confirmed comets are ancient bodies with an abundance of ice -- some which formed a few tens of degrees above absolute zero at the edge of the solar system -- we now know that comets are really a mix of materials made by conditions of both 'fire and ice,'" said Brownlee.

While Stardust was the first deep-space sample-return mission of a celestial body, it was by no means the last. The Japanese Space Agency (JAXA's) Hayabusa mission collected samples from an asteroid and returned them to Earth in 2010, and the Hayabusa 2 mission to return material from asteroid Ryugu is currently underway. Still to come is NASA's OSIRIS-Rex mission. Scheduled to launch in September of this year, OSIRIS-REx will travel to the near-Earth asteroid Bennu and retrieve at least 2.1 ounces (60 grams) of surface material and return it to Earth for study.

"The ways to explore space are probably as big as space itself," said Brownlee. "But for my money, you can't beat sample return. Having samples there in front of you, available for laboratory analysis when you want -- that's tough to beat."

Another thing about Stardust that was tough to beat was the spacecraft itself. Launched on Feb. 7, 1999, Stardust flew past an asteroid known as Annefrank, flew past and collected particle samples from comet Wild-2, and returned those particles to Earth in a sample return capsule in January 2006. As planned, the Stardust spacecraft did not re-enter Earth's atmosphere along with its sample return capsule. Instead, it went into a solar orbit. NASA then re-tasked the still-healthy spacecraft to perform a flyby of comet Tempel 1 on Feb. 14, 2011.

For more information on the prime mission of the Stardust spacecraft, please visit:

For more information on the Stardust-NExT mission, please visit:

For more information on the OSIRIS-REx mission, visit: