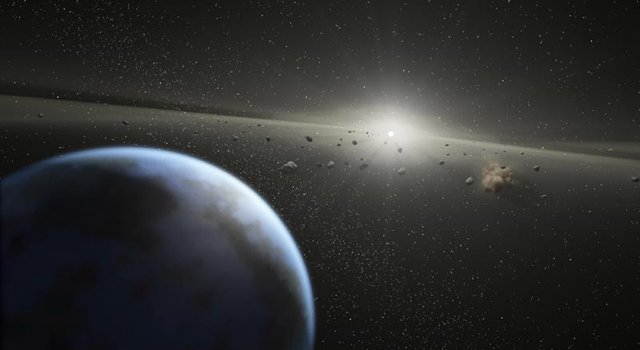 This artist's concept shows a massive asteroid belt in orbit around a star the same age and size as our Sun. A collision between two asteroids is depicted to the right. + Video: Alien asteroid belt (closed captioned)

NASA's Spitzer Space Telescope has spotted what may be the dusty spray of asteroids banging together in a belt that orbits a star like our Sun.

NASA's Spitzer Space Telescope has spotted what may be the dusty spray of asteroids banging together in a belt that orbits a star like our Sun. The discovery offers astronomers a rare glimpse at a distant star system that resembles our home, and may represent a significant step toward learning if and where other Earths form.

"Asteroids are the leftover building blocks of rocky planets like Earth," said Dr. Charles Beichman of the California Institute of Technology, Pasadena, Calif. Beichman is lead author of a paper that will appear in the Astrophysical Journal. "We can't directly see other terrestrial planets, but now we can study their dusty fossils."

Asteroid belts are the junkyards of planetary systems. They are littered with the rocky scraps of failed planets, which occasionally crash into each other, kicking up plumes of dust. In our own solar system, asteroids have collided with Earth, the moon and other planets.

If confirmed, the new asteroid belt would be the first detected around a star about the same age and size as our Sun. The star, called HD69830, is located 41 light-years away from Earth. There are two other known distant asteroid belts, but they circle younger, more massive stars.

While this new belt is the closest known match to our own, it is not a perfect twin. It is thicker than our asteroid belt, with 25 times as much material. If our solar system had a belt this dense, its dust would light up the night skies as a brilliant band.

The alien belt is also much closer to its star. Our asteroid belt lies between the orbits of Mars and Jupiter, whereas this one is located inside an orbit equivalent to that of Venus.

Yet, the two belts may have one important trait in common. In our solar system, Jupiter acts as an outer wall to the asteroid belt, shepherding its debris into a series of bands. Similarly, an unseen planet the size of Saturn or smaller may be marshalling this star's rubble.

One of NASA's future planet-hunting missions, SIM PlanetQuest, may ultimately identify such a planet orbiting HD 69830. The mission, which will detect planets as small as a few Earth masses, is scheduled to launch in 2011.

Beichman and colleagues used Spitzer's infrared spectrograph to observe 85 Sun-like stars. Only HD 69830 was found to possibly host an asteroid belt. They did not see the asteroids themselves, but detected a thick disk of warm dust confined to the inner portion of the star system. The dust most likely came from an asteroid belt in which dusty smash-ups occur relatively frequently, about every 1,000 years.

"Because this belt has more asteroids than ours, collisions are larger and more frequent, which is why Spitzer could detect the belt," said Dr. George Rieke, University of Arizona, Tucson, co- author of the paper. "Our present-day solar system is a quieter place, with impacts of the scale that killed the dinosaurs occurring only every 100 million years or so."

To confirm that the dust detected by Spitzer is indeed ground-up asteroids, a second less-likely theory will have to be ruled out. According to the astronomers, it is possible a giant comet, almost as big as Pluto, got knocked into the inner solar system and is slowly boiling away, leaving a trail of dust. This hypothesis came about when the astronomers discovered the dust around the star consists of small silicate crystals like those found in comet Hale-Bopp. One of these crystals is the bright green-colored gem called forsterite.

"The 'super comet' theory is more of a long shot," Beichman said, "but we'll know soon enough." Future observations of the star using Spitzer and ground-based telescopes are expected to conclude whether asteroids or comets are the source of the dust.

Other authors of this study include G. Bryden, T. Gautier, K. Stapelfeldt and M. Werner of NASA's Jet Propulsion Laboratory, Pasadena, Calif.; and K. Misselt, J. Stansberry and D. Trilling of the University of Arizona.