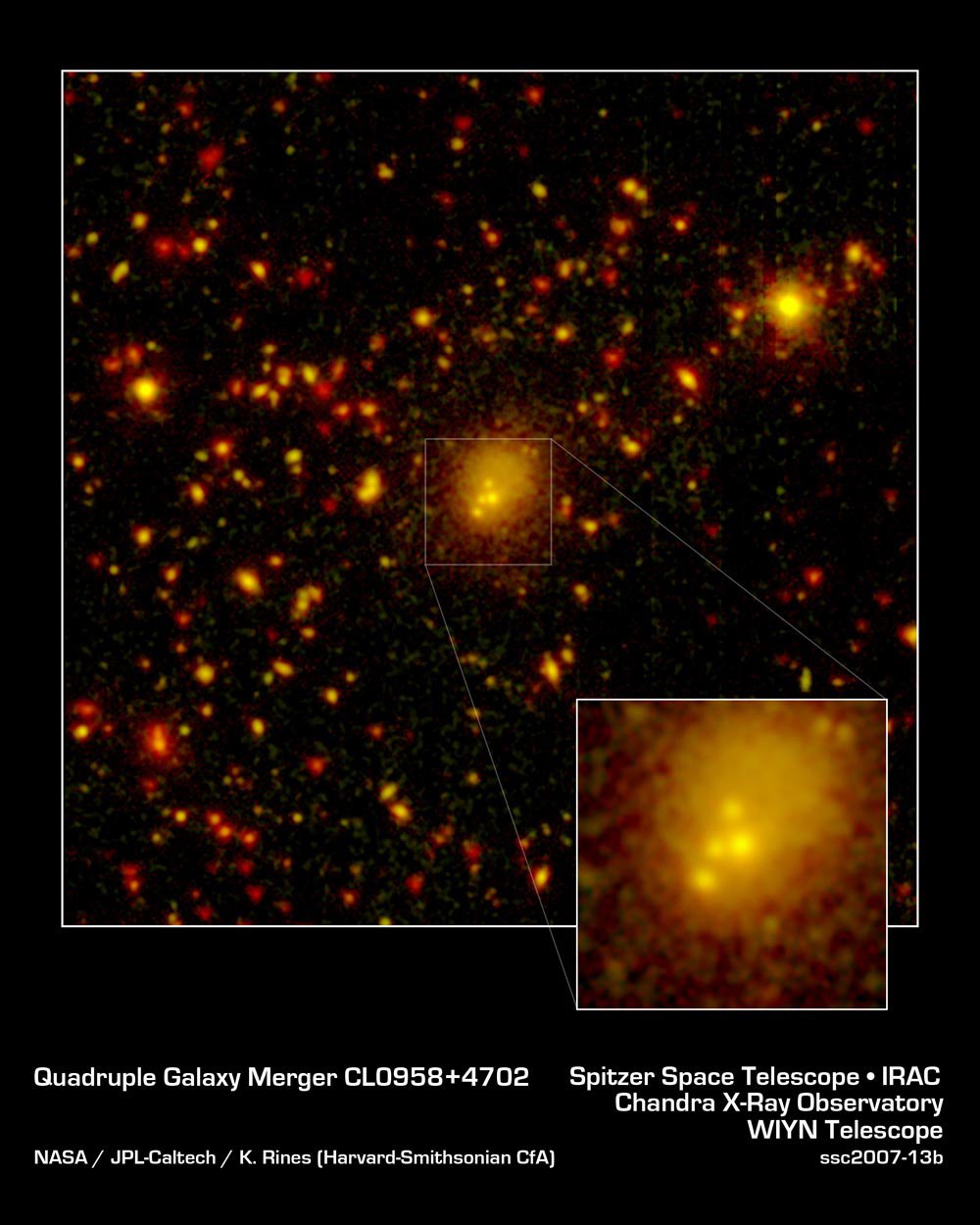 One of the biggest galaxy collisions ever observed is taking place at the center of this image. The four yellow blobs in the middle are large galaxies that have begun to tangle and ultimately merge into a single gargantuan galaxy.+ Full image and caption
Credit: NASA/JPL-Caltech/CXO/WIYN/Harvard-Smithsonian CfA 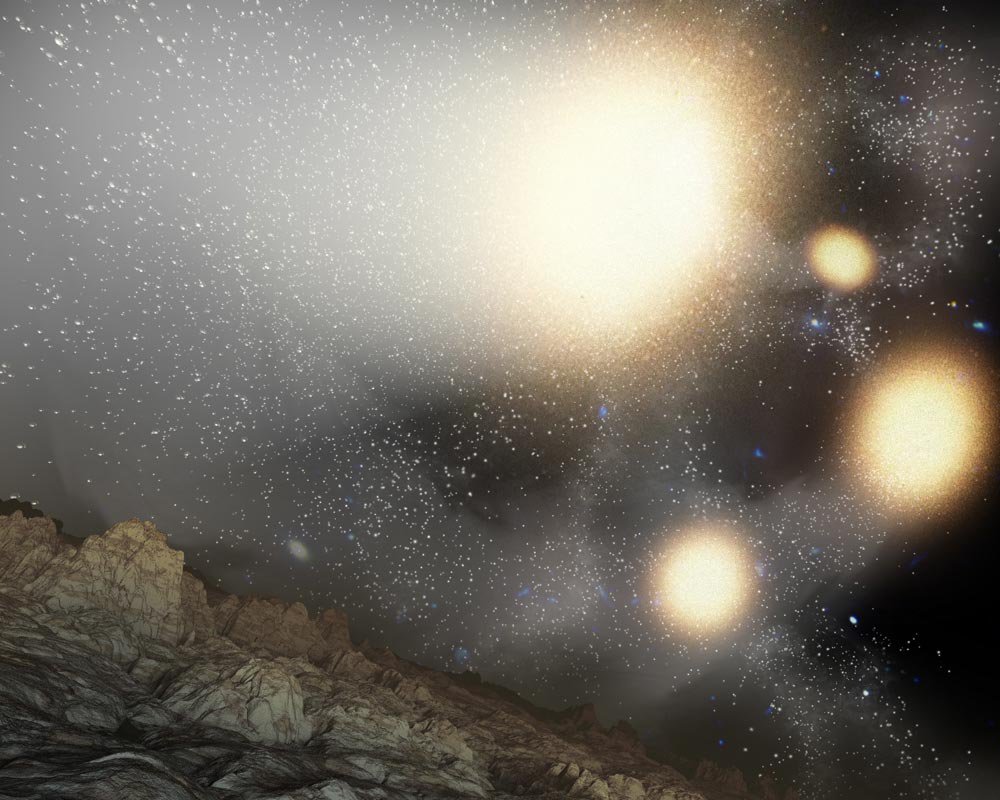 This artist's concept shows what the night sky might look like from a hypothetical planet around a star tossed out of the ongoing collision between big galaxies (yellow blobs).+ Full image and caption
Credit: NASA/JPL-Caltech/Harvard-Smithsonian CfA

Four galaxies are slamming into each other and kicking up billions of stars in one of the largest cosmic smash-ups ever observed.

Four galaxies are slamming into each other and kicking up billions of stars in one of the largest cosmic smash-ups ever observed.

The clashing galaxies, spotted by NASA's Spitzer Space Telescope, will eventually merge into a single, behemoth galaxy up to 10 times as massive as our own Milky Way. This rare sighting provides an unprecedented look at how the most massive galaxies in the universe form.

"Most of the galaxy mergers we already knew about are like compact cars crashing together," said Kenneth Rines of the Harvard-Smithsonian Center for Astrophysics, Cambridge, Mass. "What we have here is like four sand trucks smashing together, flinging sand everywhere." Rines is lead author of a new paper accepted for publication in Astrophysical Journal Letters.

Collisions, or mergers, between galaxies are common in the universe. Gravity causes some galaxies that are close together to tangle and ultimately unite over a period of millions of years. Though stars in merging galaxies are tossed around like sand, they have a lot of space between them and survive the ride. Our Milky Way galaxy will team up with the Andromeda galaxy in five billion years.

Mergers between one big galaxy and several small ones, called minor mergers, are well documented. For example, one of the most elaborate known minor mergers is taking place in the Spiderweb galaxy – a massive galaxy that is catching dozens of small ones in its "web" of gravity. Astronomers have also witnessed "major" mergers among pairs of galaxies that are similar in size. But no major mergers between multiple hefty galaxies – the big rigs of the galaxy world – have been seen until now.

The new quadruple merger was discovered serendipitously during a Spitzer survey of a distant cluster of galaxies, called CL0958+4702, located nearly five billion light-years away. The infrared telescope first spotted an unusually large fan-shaped plume of light coming out of a gathering of four blob-shaped, or elliptical, galaxies. Three of the galaxies are about the size of the Milky Way, while the fourth is three times as big.

Further analysis of the plume revealed it is made up of billions of older stars flung out and abandoned in an ongoing clash. About half of the stars in the plume will later fall back into the galaxies. "When this merger is complete, this will be one of the biggest galaxies in the universe," said Rines.

The Spitzer observations also show that the new merger lacks gas. Theorists predict that massive galaxies grow in a variety of ways, including gas-rich and gas-poor mergers. In gas-rich mergers, the galaxies are soaked with gas that ignites to form new stars. Gas-poor mergers lack gas, so no new stars are formed. Spitzer found only old stars in the quadruple encounter.

"The Spitzer data show that these major mergers are gas-poor, unlike most mergers we know about," said Rines. "The data also represent the best evidence that the biggest galaxies in the universe formed fairly recently through major mergers."

Some of the stars tossed out in the monstrous merger will live in isolated areas outside the borders of any galaxies. Such abandoned stars could theoretically have planets. If so, the planets' night skies would be quite different from our own, with fewer stars and more visible galaxies.

In addition to Spitzer, Rines and his team used a telescope formerly known as the Multiple Mirror Telescope and now called MMT near Tucson, Ariz., to confirm that the four galaxies are intertwined, and NASA's Chandra X-ray Observatory to weigh the mass of the giant cluster of galaxies in which the merger was discovered. Both Spitzer and a telescope known as WIYN at Kitt Peak, also near Tucson, Ariz., were used to study the plume. WIYN is named after the University of Wisconsin, Indiana University, Yale University and the National Optical Astronomy Observatory, which own and operate the telescope.

Other authors of this paper include Rose Finn of Siena College, Loudonville, N.Y.; and Alexey Vikhlinin of the Harvard-Smithsonian Center for Astrophysics.

For the Spitzer picture of the quadruple merger, an artist concept and more information, please visit: http://www.spitzer.caltech.edu/spitzer or http://www.nasa.gov/spitzer.
+ Spitzer home page