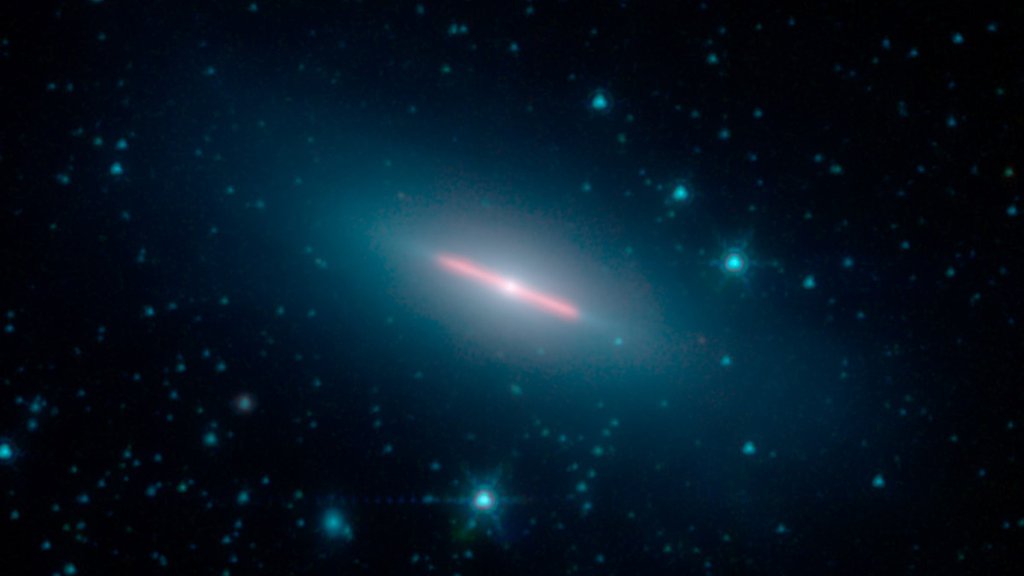 Galaxy NGC 5866 lies 44 million light-years from Earth and has a diameter of roughly 60,000 light-years - a little more than half the diameter of our own Milky Way galaxy. From our viewpoint, NGC 5866 is oriented almost exactly edge-on, yielding most of its structural features invisible.› Full image and caption
Credit: NASA/JPL-Caltech

It might look like a lightsaber floating in space, but the red beam in the middle of this image is actually a galaxy seen edge-on.

This image from NASA's Spitzer Space Telescope might look like a lightsaber floating in space, but it's actually an entire galaxy viewed on its side.

The long red beam in the center of the image is a galaxy called NGC 5866. It lies 44 million light-years from Earth and has a diameter of roughly 60,000 light-years - a little more than half the diameter of our own Milky Way galaxy. When we think of galaxies, we often imagine massive spiral arms or thick disks of dust. But not all galaxies are oriented face-on as viewed from Earth. From our viewpoint, we see only the edge of NGC 5866, so most of its structural features are invisible.

Spitzer detects infrared light, and the red color here corresponds to an infrared wavelength typically emitted by dust. With a consistency similar to soot or thick smoke, the dust absorbs light from stars, then reemits light at longer wavelengths, including in infrared. (Materials used to make blacklight posters work via this same mechanism, by absorbing ultraviolet light and reemitting visible light.) The clean edges of the dust emission from NGC 5866 indicate that there is a very flat ring or disk of dust circling the outer region of the galaxy. Dust rings and disks sometimes form in the wake of galaxies merging, but this galaxy lacks any sign of twists or distortions in the ring that often appear as the result of a merger.

Trying to learn about the history and shape of NGC 5866 is challenging due to its orientation. Our view of this galaxy is somewhat like our view of the Milky Way galaxy: Because Earth lies inside the Milky Way, we can see it only edge-on rather than face-on. But our proximity to the rest of the Milky Way has allowed astronomers to reconstruct what our galaxy would look like viewed face-on. Even the Sombrero galaxy, which is nearly edge-on as viewed from Earth, is tilted just enough to reveal a symmetric ring of dust around the galaxy's center. If seen perfectly edge-on, the Sombrero might look a lot like NGC 5866.

Spitzer took this image during its "cold" mission, which ended in 2009. The colors represent three infrared wavelengths captured by the Infrared Array Camera instrument. Blue light corresponds to Spitzer's observations at a wavelength of 3.6 microns, produced mainly by stars; green corresponds to 4.5 microns; and red corresponds to 8 microns. In this image, the blue haze is produced by stars that make up most of the mass of the galaxy.

A visible light image of NGC 5866 from NASA's Hubble Space Telescope at the following site: