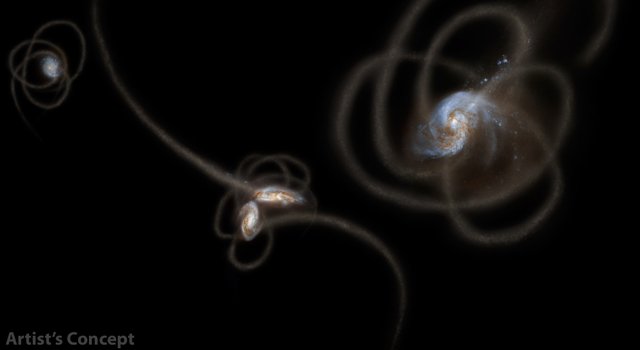 New research from scientists using NASA's Spitzer Space Telescope suggests that a mysterious infrared glow across our whole sky is coming from stray stars torn from galaxies. When galaxies grow, they merge and become gravitationally tangled in a violent process that results in streams of stars being ripped away from the galaxies. Such streams, called tidal tails, can be seen in this artist's concept. Scientists say that Spitzer is picking up the collective glow of stars such as these, which linger in the spaces between galaxies.› Full image and caption
Credit: NASA/JPL-Caltech/UC Irvine 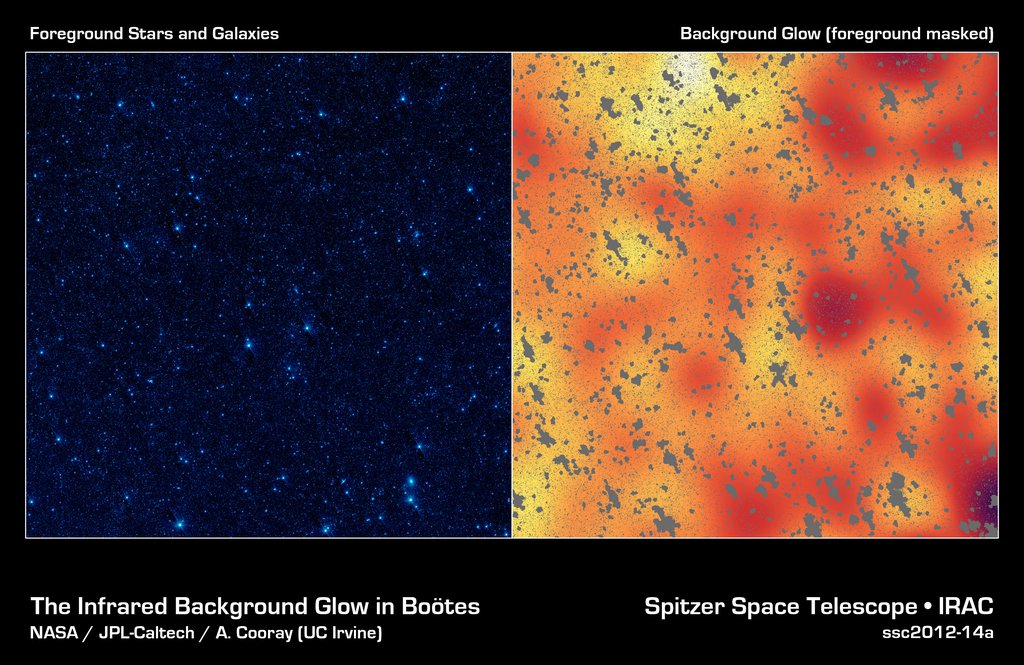 The image on the left shows a portion of our sky, called the Boötes field, in infrared light, while the image on the right shows a mysterious, background infrared glow captured by NASA's Spitzer Space Telescope in the same region of sky. Using Spitzer, researchers were able to detect this background glow, which spreads across the whole sky, by masking out light from galaxies and other known sources of light (the masks are the gray, blotchy marks).› Full image and caption
Credit: NASA/JPL-Caltech

A new study using data from NASA's Spitzer Space Telescope suggests a cause for the mysterious glow of infrared light seen across the entire sky.

PASADENA, Calif. - A new study using data from NASA's Spitzer Space Telescope suggests a cause for the mysterious glow of infrared light seen across the entire sky. It comes from isolated stars beyond the edges of galaxies. These stars are thought to have once belonged to the galaxies before violent galaxy mergers stripped them away into the relatively empty space outside of their former homes.

"The infrared background glow in our sky has been a huge mystery," said Asantha Cooray of the University of California at Irvine, lead author of the new research published in the journal Nature. "We have new evidence this light is from the stars that linger between galaxies. Individually, the stars are too faint to be seen, but we think we are seeing their collective glow."

The findings disagree with another theory explaining the same background infrared light observed by Spitzer. A group led by Alexander "Sasha" Kashlinsky of NASA's Goddard Space Flight Center in Greenbelt, Md., proposed in June this light, which appears in Spitzer images as a blotchy pattern, is coming from the very first stars and galaxies.

In the new study, Cooray and colleagues looked at data from a larger portion of the sky, called the Bootes field, covering an arc equivalent to 50 full Earth moons. These observations were not as sensitive as those from the Kashlinsky group's studies, but the larger scale allowed researchers to analyze better the pattern of the background infrared light.

"We looked at the Bootes field with Spitzer for 250 hours," said co-author Daniel Stern of NASA's Jet Propulsion Laboratory in Pasadena, Calif. "Studying the faint infrared background was one of the core goals of our survey, and we carefully designed the observations in order to directly address the important, challenging question of what causes the background glow."

The team concluded the light pattern of the infrared glow is not consistent with theories and computer simulations of the first stars and galaxies. Researchers say the glow is too bright to be from the first galaxies, which are thought not to have been as large or as numerous as the galaxies we see around us today. Instead, the scientists propose a new theory to explain the blotchy light, based on theories of "intracluster" or "intrahalo" starlight.

Theories predict a diffuse smattering of stars beyond the halos, or outer reaches, of galaxies, and in the spaces between clusters of galaxies. The presence of these stars can be attributed to two phenomena. Early in the history of our universe as galaxies grew in size, they collided with other galaxies and gained mass. As the colliding galaxies became tangled gravitationally, strips of stars were shredded and tossed into space. Galaxies also grow by swallowing smaller dwarf galaxies, a messy process that also results in stray stars.

"A light bulb went off when reading some research papers predicting the existence of diffuse stars," Cooray said. "They could explain what we are seeing with Spitzer."

More research is needed to confirm this sprinkling of stars makes up a significant fraction of the background infrared light. For instance, it would be necessary to find a similar pattern in follow-up observations in visible light. NASA's upcoming James Webb Space Telescope (JWST) might finally settle the matter for good.

"The keen infrared vision of the James Webb Telescope will be able to see some of the earliest stars and galaxies directly, as well as the stray stars lurking between the outskirts of nearby galaxies," said Eric Smith, JWST's deputy program manager at NASA Headquarters in Washington. "The mystery objects making up the background infrared light may finally be exposed."

JPL manages the Spitzer Space Telescope mission for NASA's Science Mission Directorate in Washington. Science operations are conducted at the Spitzer Science Center at the California Institute of Technology in Pasadena. Data are archived at the Infrared Science Archive housed at the Infrared Processing and Analysis Center at Caltech. Caltech manages JPL for NASA.