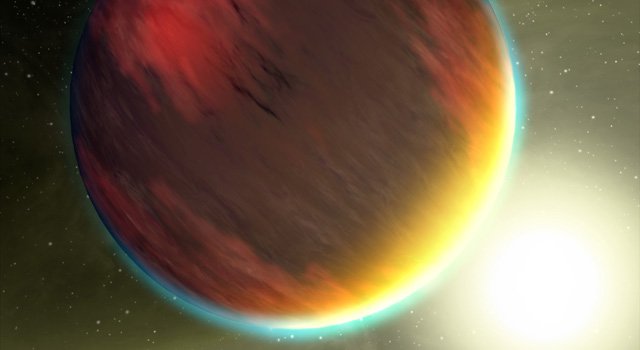 NASA's Spitzer Space Telescope was recently used to capture spectra, or molecular fingerprints, of two "hot Jupiter" worlds like the one depicted here. This is the first time a spectrum has ever been obtained for an exoplanet, or a planet beyond our solar system.› Animation and caption
Credit: NASA/JPL-Caltech

NASA's Spitzer Space Telescope has captured for the first time enough light from planets outside our solar system, known as exoplanets, to identify molecules in their atmospheres.

NASA's Spitzer Space Telescope has captured for the first time enough light from planets outside our solar system, known as exoplanets, to identify molecules in their atmospheres. The landmark achievement is a significant step toward being able to detect possible life on rocky exoplanets and comes years before astronomers had anticipated.

"This is an amazing surprise," said Spitzer project scientist Dr. Michael Werner of NASA's Jet Propulsion Laboratory, Pasadena, Calif. "We had no idea when we designed Spitzer that it would make such a dramatic step in characterizing exoplanets."

Spitzer, a space-based infrared telescope, obtained the detailed data, called spectra, for two different gas exoplanets. Called HD 209458b and HD 189733b, these so-called "hot Jupiters" are, like Jupiter, made of gas, but orbit much closer to their suns.

The data indicate the two planets are drier and cloudier than predicted. Theorists thought hot Jupiters would have lots of water in their atmospheres, but surprisingly none was found around HD 209458b and HD 189733b. According to astronomers, the water might be present but buried under a thick blanket of high, waterless clouds.

Those clouds might be filled with dust. One of the planets, HD 209458b, showed hints of tiny sand grains, called silicates, in its atmosphere. This could mean the planet's skies are filled with high, dusty clouds unlike anything seen around planets in our own solar system.

"It is virtually impossible for water, in the form of vapor, to be absent from the planet, so it must be hidden, probably by the dusty cloud layer we detected in our spectrum," he said. Richardson is lead author of a Nature paper appearing Feb. 22 that describes a spectrum for HD 209458b.

In addition to Richardson's team, two other groups of astronomers used Spitzer to capture spectra of exoplanets. A team led by Dr. Carl Grillmair of NASA's Spitzer Science Center at the California Institute of Technology in Pasadena, Calif., observed HD 189733b, while a team led by Dr. Mark R. Swain of JPL focused on the same planet in the Richardson study, and came up with similar results. Grillmair's results will be published in the Astrophysical Journal Letters. Swain's findings have been submitted to the Astrophysical Journal Letters.

A spectrum is created when an instrument called a spectrograph splits light from an object into its different wavelengths, just as a prism turns sunlight into a rainbow. The resulting pattern of light, the spectrum, reveals "fingerprints" of chemicals making up the object.

Until now, the only planets for which spectra were available belonged in our own solar system. The planets in the Spitzer studies orbit stars that are so far away, they are too faint to be seen with the naked eye. HD 189733b is 370 trillion miles away in the constellation Vulpecula, and HD 209458b is 904 trillion miles away in the constellation Pegasus. That means both planets are at least about a million times farther away from us than Jupiter. In the future, astronomers hope to have spectra for smaller, rocky planets beyond our solar system. This would allow them to look for the footprints of life - molecules key to the existence of life, such as oxygen and possibly even chlorophyll.

"With these new observations, we are refining the tools that we will one day need to find life elsewhere if it exists," said Swain. "It's sort of like a dress rehearsal."

Spitzer was able to tease out spectra from the feeble light of the two planets through what is known as the "secondary eclipse" technique. In this method - first used by Spitzer in 2005 to directly detect the light from an exoplanet for the first time (http://www.spitzer.caltech.edu/Media/releases/ssc2005-09/index.shtml) - a so-called transiting planet is monitored as it circles behind its star, temporarily disappearing from our Earthly point of view. By measuring the dip in infrared light that occurs when the planet disappears, Spitzer can learn how much light is coming solely from the planet. The technique will work only in infrared wavelengths, where the planet is brighter than in visible wavelengths and stands out better next to the overwhelming glare of its star.

"When we first set out to make these observations, they were considered high risk because not many people thought they would work," said Grillmair. "But Spitzer has turned out to be superbly designed and more than up to the task."

Previous observations of HD 209458b by NASA's Hubble Space Telescope revealed individual elements, such as sodium, oxygen, carbon and hydrogen, that bounce around the very top of the planet, a region higher up than that probed in the Spitzer studies and a region where molecules like water would break apart. To do this, Hubble measured changes in the light from the star, not the planet, as the planet passed in front. The observations indicated less sodium than predicted, which again supports the idea that the planet is socked in with high clouds.

Astronomers hope to use Spitzer for additional studies of transiting exoplanets, which are those that cross in front of their stars from our point of view. Of the approximately 200 known exoplanets, 14 are transiting. At least three of these in addition to HD 209458b and HD 189733b are candidates for obtaining spectra. Further spectral studies of HD 209458b and HD 189733b will also yield more information about the planets' atmospheres.