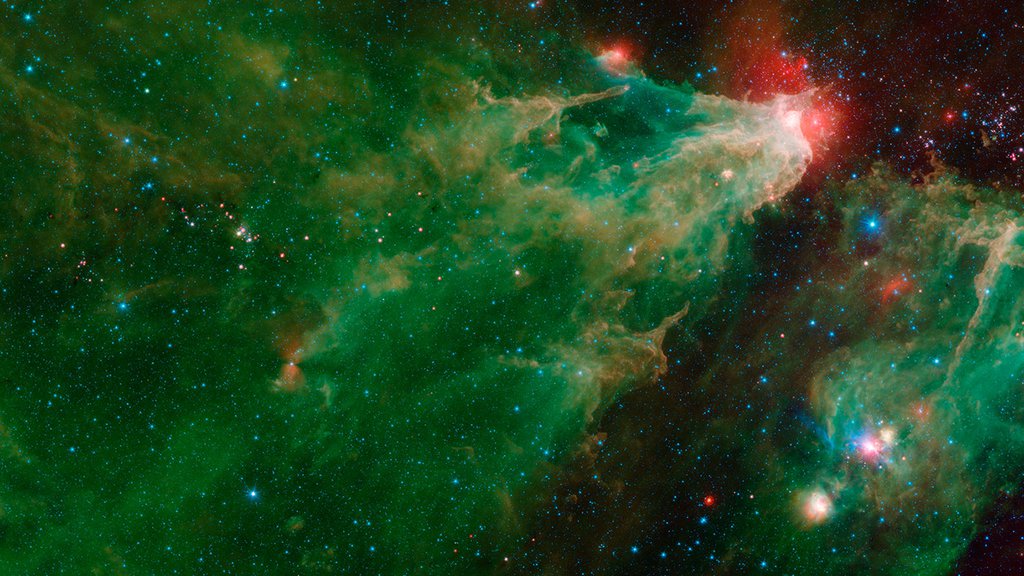 A mosaic by NASA's Spitzer Space Telescope of the Cepheus C and Cepheus B regions. This image combines data from Spitzer's IRAC and MIPS instruments.› Full image and caption
Credit: NASA/JPL-Caltech

The evolution of stellar families - born from the same clumps of gas and dust - is just some of what's on display in this sweeping image.

In this large celestial mosaic taken by NASA's Spitzer Space Telescope, there's a lot to see, including multiple clusters of stars born from the same dense clumps of gas and dust. Some of these clusters are older than others and more evolved, making this a generational stellar portrait.

The grand green-and-orange delta filling most of the image is a faraway nebula, or a cloud of gas and dust in space. Though the cloud may appear to flow from the bright white spot at its tip, it is actually what remains of a much larger cloud that has been carved away by radiation from stars. The bright region is illuminated by massive stars, belonging to a cluster that extends above the white spot. The white color is the combination of four colors (blue, green, orange and red), each representing a different wavelength of infrared light, which is invisible to human eyes. Dust that has been heated by the stars' radiation creates the surrounding red glow.

An annotated mosaic by NASA's Spitzer Space Telescope of the Cepheus C and Cepheus B regions. This image combines data from Spitzer's IRAC and MIPS instruments.
Image Credit: NASA/JPL-Caltech
Full image and caption

On the left side of this image, a dark filament runs horizontally through the green cloud. A smattering of baby stars (the red and yellow dots) appear inside it. Known as Cepheus C, the area is a particularly dense concentration of gas and dust where infant stars form. The dark vein of material will eventually be dispersed by strong winds produced as the stars get older, as well as when they eventually explode and die. This will create an illuminated puffed-up region that will look similar to the bright red-and-white region on the large nebula's upper-right side. The region is called Cepheus C because it lies in the constellation Cepheus, which can be found near the constellation Cassiopeia. Cepheus C is about 6 light-years long and lies about 40 light-years from the bright spot at the tip of the nebula.

A second large nebula can be seen on the right side of the image, with a star cluster located just above it. Known as Cepheus B, the cluster sits within a few thousand light-years of our Sun. A study of this region using Spitzer data found that the dramatic collection is about 4 million to 5 million years old - slightly older than those in Cepheus C.

In that way, the mosaic is a veritable family portrait, featuring infants, parents and grandparents of star-forming regions: Stars form in dense clouds of material, like the dark vein that makes up Cepheus C. As the stars grow, they produce winds that blow the gas and dust outward, to form beautiful, illuminated nebulas like the bright white spot at the top of the larger nebula. Finally, the dust and gas disperse, and the star clusters stand alone in space, as with Cepheus B.

Other Sights to See

The amazing features in this image don't end there.

Look closely for the small, red hourglass shape just below Cepheus C. This is V374 Ceph. Astronomers studying this massive star have speculated that it might be surrounded by a nearly edge-on disk of dark, dusty material. The dark cones extending to the right and left of the star are a shadow of that disk.

The smaller nebula on the right side of the image includes two particularly interesting objects. In the upper-left portion of the nebula, try to find a blue star crowned by a small, red arc of light. This "runaway star" is plowing through the gas and dust at a rapid clip, creating a shock wave, or "bow shock," in front of itself.

Drag and slide the marker to compare an annotated and unannotated image of the Cepheus B and Cepheus C regions by NASA's Spitzer Space Telescope, using data from the IRAC instrument. Credit: NASA/JPL-Caltech.
Full image and caption

More About the Images

The two-instrument image was compiled using data from the Infrared Array Camera (IRAC) and the Multiband Imaging Photometer (MIPS) during Spitzer's "cold" mission, before the spacecraft's liquid helium coolant ran out in 2009. The colors correspond with IRAC wavelengths of 3.6 microns (blue), 4.5 microns (cyan), 8 microns (green) and MIPS at 24 microns (red).

The one-instrument image shows data from IRAC only, with colors corresponding to wavelengths of 3.6, 4.5, 5.8 and 8.0 ?m (shown as blue, green, orange and red).