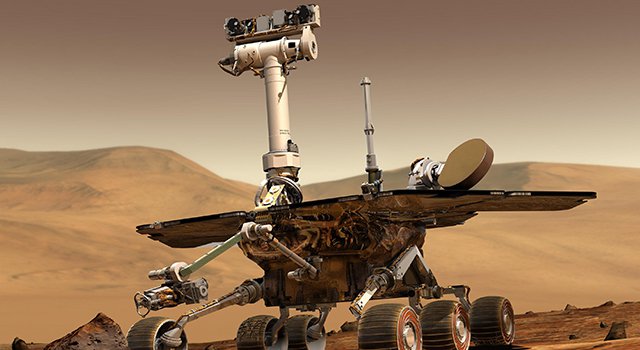 NASA's Mars rover Spirit, which overcame many obstacles during a prolonged lifetime to achieve discoveries about water and environments on ancient Mars, has finished its work.

This marks the completion of one of the most successful missions of interplanetary exploration ever launched.

Spirit last communicated on March 22, 2010, as Martian winter approached and the rover's solar-energy supply declined. The rover operated for more than six years after landing in January 2004 for what was planned as a three-month mission. NASA checked frequently in recent months for possible reawakening of Spirit as solar energy available to the rover increased during Martian spring. A series of additional re-contact attempts ended today, designed for various possible combinations of recoverable conditions.

"Our job was to wear these rovers out exploring, to leave no unutilized capability on the surface of Mars, and for Spirit, we have done that," said Mars Exploration Rover Project Manager John Callas of NASA's Jet Propulsion Laboratory, Pasadena, Calif.

Spirit drove 4.8 miles (7.73 kilometers), more than 12 times the goal set for the mission. The drives crossed a plain to reach a distant range of hills that appeared as mere bumps on the horizon from the landing site; climbed slopes up to 30 degrees as Spirit became the first robot to summit a hill on another planet; and covered more than half a mile (nearly a kilometer) after Spirit's right-front wheel became immobile in 2006. The rover returned more than 124,000 images. It ground the surfaces off 15 rock targets and scoured 92 targets with a brush to prepare the targets for inspection with spectrometers and a microscopic imager.

"What's really important is not only how long Spirit worked or how far Spirit drove, but also how much exploration and scientific discovery Spirit accomplished," Callas said.

"Spirit's unexpected discovery of concentrated silica deposits was one of the most important findings by either rover," said Steve Squyres of Cornell University, Ithaca, N.Y., principal investigator for Spirit and Opportunity. "It showed that there were once hot springs or steam vents at the Spirit site, which could have provided favorable conditions for microbial life."

The silica-rich soil neighbors a low plateau called Home Plate, which was Spirit's main destination after the historic climb up Husband Hill. "What Spirit showed us at Home Plate was that early Mars could be a violent place, with water and hot rock interacting to make what must have been spectacular volcanic explosions. It was a dramatically different world than the cold, dry Mars of today," said Squyres.

The trove of data from Spirit could still yield future science revelations. Years of analysis of some 2005 observations by the rover's Alpha Particle X-ray Spectrometer, Miniature Thermal Emission Spectrometer and Moessbauer Spectrometer produced a report last year that an outcrop on Husband Hill bears a high concentration of carbonate. This is evidence of a wet, non-acidic ancient environment that may have been favorable for microbial life.

"What's most remarkable to me about Spirit's mission is just how extensive her accomplishments became," said Squyres. "What we initially conceived as a fairly simple geologic experiment on Mars ultimately turned into humanity's first real overland expedition across another planet. Spirit explored just as we would have, seeing a distant hill, climbing it, and showing us the vista from the summit. And she did it in a way that allowed everyone on Earth to be part of the adventure."

JPL, a division of the California Institute of Technology in Pasadena, manages the Mars Exploration Rovers Opportunity and Spirit for the NASA Science Mission Directorate, Washington. For more about the rovers, see: http://www.nasa.gov/rovers and http://marsrovers.jpl.nasa.gov.
› Blog: A Heartfelt Goodbye to a Spirited Mars Rover
› Send a tribute to Spirit