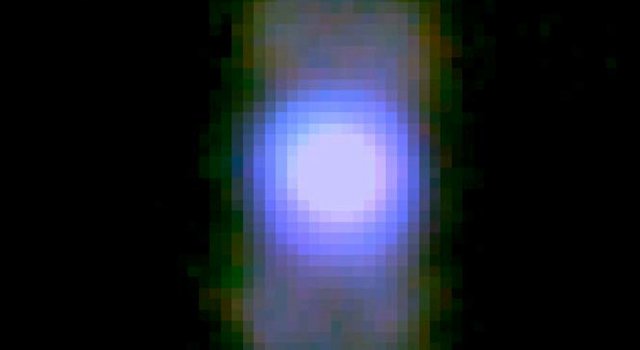 The last exhalations of a dying star can be seen in a new image from NASA's SOFIA telescope.

Researchers using NASA's Stratospheric Observatory for Infrared Astronomy (SOFIA) have captured an infrared image of the last exhalations of a dying sun-like star.

The object observed by SOFIA, planetary nebula Minkowski 2-9, or M2-9 for short, is seen in this three-color composite image.

"The SOFIA images provide our most complete picture of the outflowing material on its way to being recycled into the next generation of stars and planets," said Mike Werner, principal investigator of the observations at NASA's Jet Propulsion Laboratory in Pasadena, Calif. "We were gratified to see the lobes so clearly using SOFIA. These early results demonstrate the scientific potential of this important new observatory."

Objects such as M2-9 are called planetary nebulae due to a mistake made by early astronomers, who discovered these objects while sweeping the sky with small telescopes. Many of these nebulae have the color, shape and size of Uranus and Neptune, so they were dubbed planetary nebulae. The name persists despite the fact that these nebulae are now known to be distant clouds of material, far beyond our solar system, which are shed by stars about the size of our sun undergoing upheavals during their final life stages.

Although the M2-9 nebular material is flowing out from a spherical star, it is extended in one dimension, appearing as a cylinder or hourglass. Astronomers hypothesize that planetary nebulae with such shapes are produced by opposing flows of high-speed material caused by a disk of material around the dying star, located at the center of the nebula. SOFIA's observations of M2-9 were designed to study the outflow in detail with the goal of better understanding this stellar life cycle stage, which is important in our galaxy's evolution.

The SOFIA observations were made at the mid-infrared wavelengths of 20, 24, and 37 microns. The 37-micron wavelength band detects the strongest emissions from the nebula and is impossible to observe from ground-based telescopes.

The observations were made using the Faint Object Infrared Camera for the SOFIA Telescope (FORCAST) instrument in June 2011 by a team consisting of astronomers from JPL, the California Institute of Technology in Pasadena, the University of California at Los Angeles, Cornell University and Ithaca College, both in Ithaca, N.Y. Preliminary analyses of these data were first presented in January 2012 at the American Astronomical Society meeting in Austin, Texas.

The SOFIA observatory combines an extensively modified Boeing 747SP aircraft and a 17-metric-ton reflecting telescope with an effective diameter of 100 inches (2.5 meters) to altitudes as high as 45,000 feet (14 kilometers). This places the telescope above more than 99 percent of the water vapor in Earth's atmosphere that blocks most infrared radiation from celestial sources.

SOFIA is a joint project of NASA and the German Aerospace Center (DLR), and is based and managed at NASA's Dryden Aircraft Operations Facility in Palmdale, Calif. NASA's Ames Research Center in Moffett Field, Calif., manages the SOFIA science and mission operations in cooperation with the Universities Space Research Association (USRA), headquartered in Columbia, Md., and the German SOFIA Institute (DSI) at the University of Stuttgart.