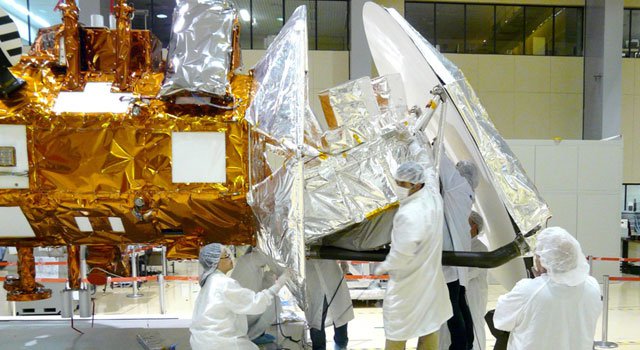 NASA technicians are busy prepping for the dawning of the age of Aquarius/SAC-D, the mission.

Activities are proceeding on schedule for shipment of the spacecraft to California's Vandenberg Air Force Base in late March for a launch in early June.

Aquarius/SAC-D is an international mission involving NASA and Argentina's space agency, Comisión Nacional de Actividades Espaciales. Aquarius, the primary instrument on the mission, was built jointly by JPL and NASA's Goddard Space Flight Center, Greenbelt, Md. It will provide monthly global maps of how the concentration of dissolved salt (known as salinity) varies on the ocean surface. Salinity is a key tracer for understanding the ocean's role in Earth's water cycle and understanding ocean circulation.

By measuring ocean salinity from space, Aquarius will provide new insights into how the massive natural interplay of freshwater moving among the ocean, atmosphere and sea ice influences Earth's ocean circulation, weather and climate.