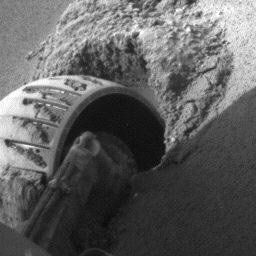 This mosaic of 24 frames from the microscopic imager on Spirit shows the texture of a target called "Keystone" on the "Methuselah" outcrop of layered rock on "Husband Hill" inside Mars' Gusev Crater.+ Full caption

NASA's Mars rover Opportunity is trying to escape from a sand trap, while its twin, Spirit, has been busy finding new clues to a wet and violent early Martian history.

NASA's Mars rover Opportunity is trying to escape from a sand trap, while its twin, Spirit, has been busy finding new clues to a wet and violent early Martian history.

"Spirit has finally found the kind of geology you can really sink your teeth into," said Dr. Steve Squyres of Cornell University, Ithaca, N.Y. He is principal investigator for the Mars rovers' science instruments. According to Squyres, multiple layers of rock in the hills Spirit is exploring suggest successive deposits of water-altered explosive debris.

Spirit, inside Mars' Gusev Crater, had to share the spotlight with the drama provided by Opportunity on the martian Meridiani plains. The rover has been hindered by soft sand for nearly three weeks. Traction is difficult in the ripple-shaped dune of windblown dust and sand that Opportunity drove into on April 26. Since it began trying to get out, the rover has advanced only 11 inches. Without the slippage caused by the rover's wheels spinning in the soft sand, Opportunity could have driven 157 feet.

"If Opportunity gets free, its next task will be examining the site to give the rover team a better understanding of how this ripple differs from dozens Opportunity easily crossed," said Jim Erickson. He is project manager for the Mars Exploration Rover project at NASA's Jet Propulsion Laboratory, Pasadena, Calif.

The rovers have worked under harsh martian conditions longer than expected. They have been studying geology on opposite sides of Mars for more than a year since successfully completing their three-month primary missions. Shortly after landing in January 2004, Opportunity found layered bedrock bearing geological evidence of a shallow ancient sea. More than one year later, Spirit found extensive layered bedrock after driving more than two miles and climbing into the "Columbia Hills."

Squyres said, "In the last few weeks, we have gone from a state of confusion about the geology of the "Columbia Hills" to having real stratigraphic sequence and a powerful working hypothesis for the history of these layers."

For several months, Spirit climbed a flank of "Husband Hill," the tallest in the range. The slope closely matched the angle of underlying rock layers, which made the layering difficult to detect. Spirit reached an intermediate destination, dubbed "Larry's Lookout," then continued uphill and looked back. "That was the critical moment, when it all began falling into place," Squyres said. "Looking back downhill, you can see the layering, and it suddenly starts to makes sense."

Spirit has been examining rocks in a series of outcrops called "Methuselah," "Jibsheet" and "Larry's Lookout." Some of the rocks contain the mineral ilmenite, not found previously by Spirit. "Ilmenite is a titanium-iron oxide formed during crystallization of magma," said Dr. Dick Morris, a rover science-team member at NASA's Johnson Space Center, Houston. "Its occurrence is evidence for diversity in the volcanic rocks in the Gusev region."

Rocks from different layers share compositional traits, high in titanium and low in chromium, which suggests a shared origin. However, the degree to which minerals in rocks have been chemically altered by exposure to water or other processes varies greatly from outcrop to outcrop. The textures also vary. At Methuselah, rocks have thin laminations revealed by Spirit's microscopic imager. At Jibsheet, they are built of bulbous grains packed together. At Larry's Lookout, the rocks are massive, with little fine-scale structure.

"Our best hypothesis is we're looking at a stack of ash or debris that was explosively erupted from volcanoes and settled down in different ways," Squyres said. "We can't fully rule out the possibility the debris was generated in impact explosions instead of volcanic ones. But we can say, once upon a time, Gusev was a pretty violent place. Big, explosive events were happening, and there was a lot of water around."

Rover-team scientists described the robot explorers' activities today at the spring meeting of the American Geophysical Union in New Orleans. For images and information about the rovers and their discoveries, visit: http://www.nasa.gov/vision/universe/solarsystem/mer_main.html.

For information about NASA and agency programs on the Web, visit: http://www.nasa.gov/home/index.html.
+ Rover news and images
+ Rover home page