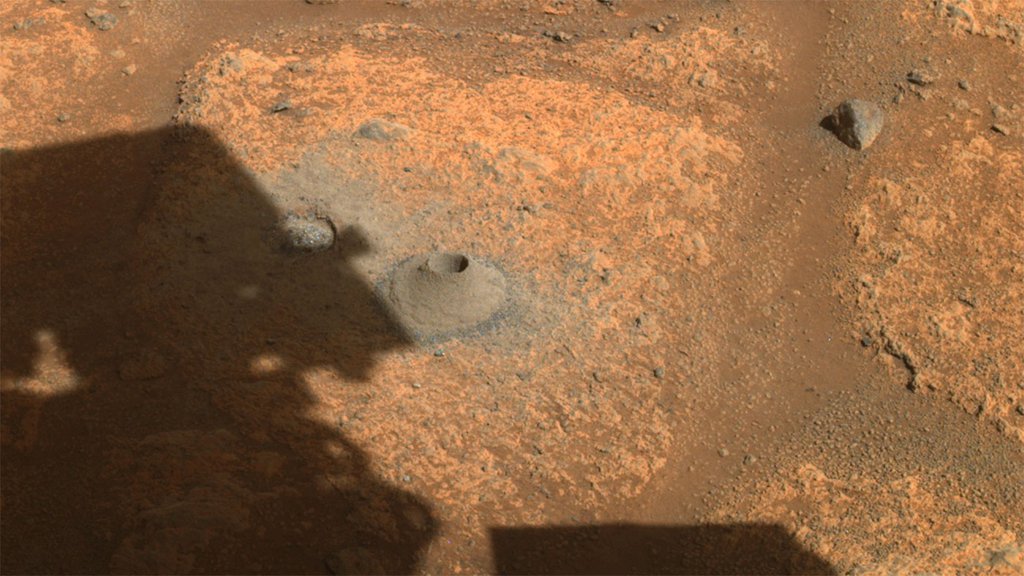 This image taken by one the hazard cameras aboard NASA’s Perseverance rover on Aug. 6, 2021, shows the hole drilled in what the rover’s science team calls a “paver rock” in preparation for the mission’s first attempt to collect a sample from Mars. Full image and caption 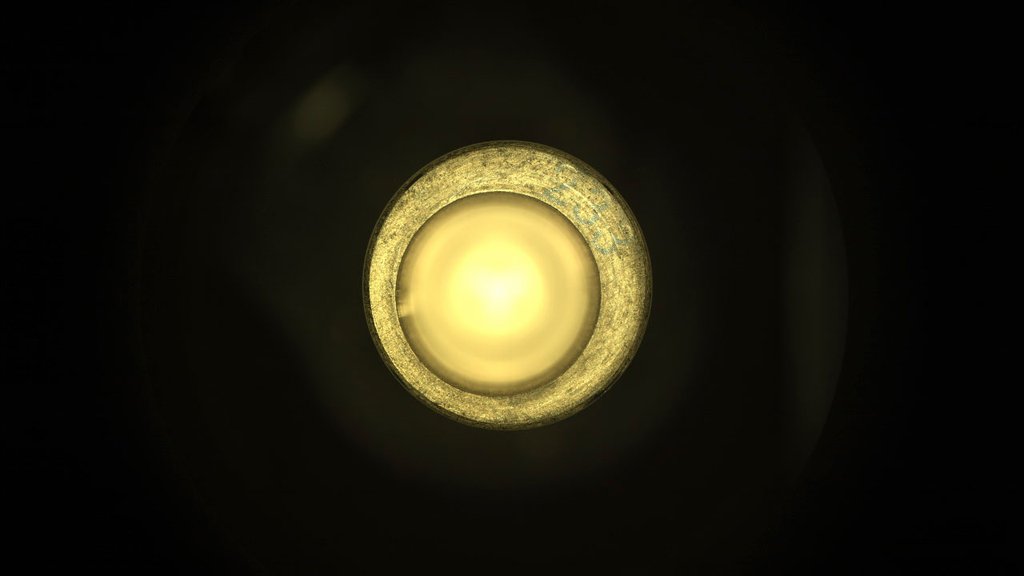 This image taken by NASA’s Perseverance rover on Aug. 6, shows that sample collection tube No. 233 is empty. It is one of the pieces of data sent to Earth by Perseverance showing that the rover did not collect any Martian rock during its first attempt to core a sample. 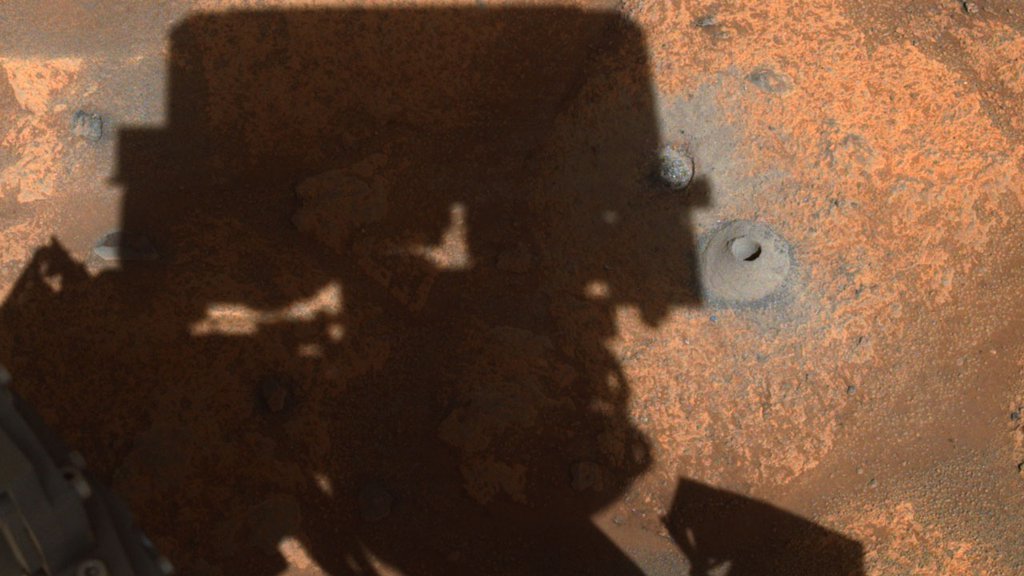 The drill hole from Perseverance’s first sample-collection attempt can be seen, along with the shadow of the rover, in this image taken by one of the rover’s navigation cameras. Full image and caption 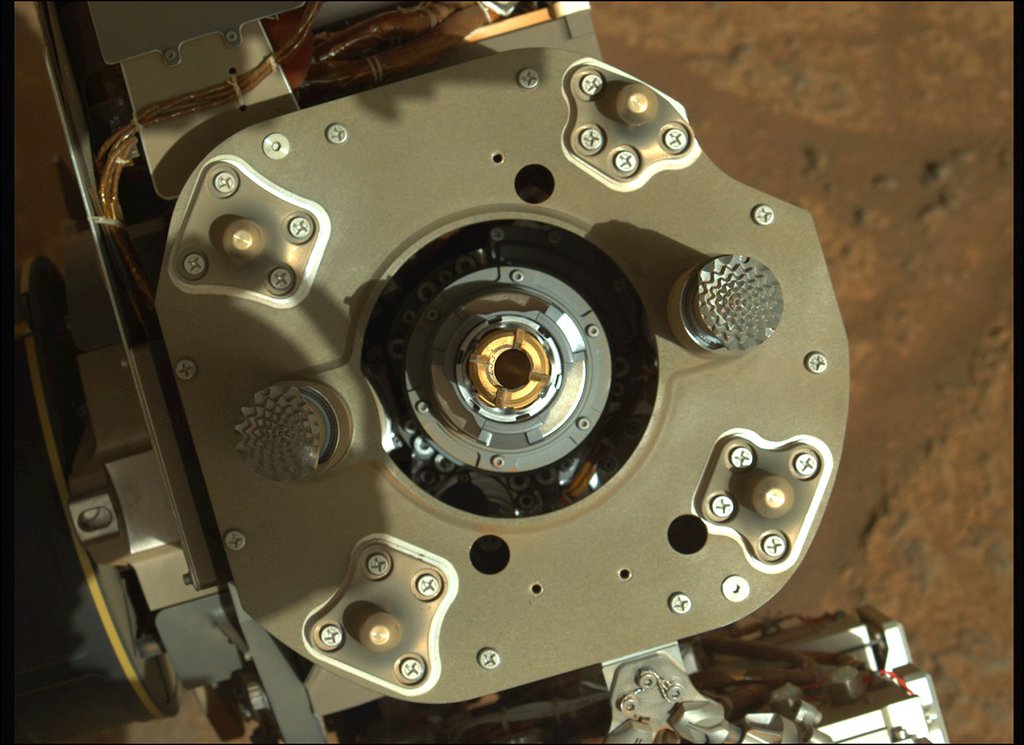 This enhanced-color image from the Mastcam-Z instrument aboard NASA’s Perseverance rover shows sample tube inside the coring bit after the Aug. 6 coring activity was completed. Full image and caption

The rover continues to explore Jezero Crater while the team assesses today’s activities.

Data sent to Earth by NASA’s Perseverance rover after its first attempt to collect a rock sample on Mars and seal it in a sample tube indicate that no rock was collected during the initial sampling activity.

The rover carries 43 titanium sample tubes and is exploring Jezero Crater, where it will be gathering samples of rock and regolith (broken rock and dust) for future analysis on Earth.

“While this is not the ‘hole-in-one’ we hoped for, there is always risk with breaking new ground,” said Thomas Zurbuchen, associate administrator of NASA’s Science Mission Directorate in Washington. “I’m confident we have the right team working this, and we will persevere toward a solution to ensure future success.”

Perseverance’s Sampling and Caching System uses a hollow coring bit and a percussive drill at the end of its 7-foot-long (2-meter-long) robotic arm to extract samples. Telemetry from the rover indicates that during its first coring attempt, the drill and bit were engaged as planned, and post-coring, the sample tube was processed as intended.

“The sampling process is autonomous from beginning to end,” said Jessica Samuels, the surface mission manager for Perseverance at NASA’s Jet Propulsion Laboratory in Southern California. “One of the steps that occurs after placing a probe into the collection tube is to measure the volume of the sample. The probe did not encounter the expected resistance that would be there if a sample were inside the tube.”

The Perseverance mission is assembling a response team to analyze the data. One early step will be to use the WATSON (Wide Angle Topographic Sensor for Operations and eNgineering) imager – located at the end of the robotic arm – to take close-up pictures of the borehole. Once the team has a better understanding of what happened, it will be able to ascertain when to schedule the next sample collection attempt.

“The initial thinking is that the empty tube is more likely a result of the rock target not reacting the way we expected during coring, and less likely a hardware issue with the Sampling and Caching System,” said Jennifer Trosper, project manager for Perseverance at JPL. “Over the next few days, the team will be spending more time analyzing the data we have, and also acquiring some additional diagnostic data to support understanding the root cause for the empty tube.”

Previous NASA missions on Mars have also encountered surprising rock and regolith properties during sample collection and other activities. In 2008, the Phoenix mission sampled soil that was “sticky” and difficult to move into onboard science instruments, resulting in multiple tries before achieving success. Curiosity has drilled into rocks that turned out to be harder and more brittle than expected. Most recently, the heat probe on the InSight lander, known as the “mole,” was unable to penetrate the Martian surface as planned.

“I have been on every Mars rover mission since the beginning, and this planet is always teaching us what we don’t know about it,” said Trosper. “One thing I’ve found is, it’s not unusual to have complications during complex, first-time activities.”

Perseverance is currently exploring two geologic units containing Jezero Crater’s deepest and most ancient layers of exposed bedrock and other intriguing geologic features. The first unit, called the “Crater Floor Fractured Rough,” is the floor of Jezero. The adjacent unit, named “Séítah” (meaning “amidst the sand” in the Navajo language), has Mars bedrock as well, and is also home to ridges, layered rocks, and sand dunes.

Recently, the Perseverance science team began using color images from the Ingenuity Mars Helicopter to help scout for areas of potential scientific interest and to look for potential hazards. Ingenuity completed its 11th flight Wednesday, Aug. 4, traveling about 1,250 feet (380 meters) downrange of its current location so that it could provide the project aerial reconnaissance of the southern Séítah area.

The rover’s initial science foray, which spans hundreds of sols (or Martian days), will be complete when Perseverance returns to its landing site. At that point, Perseverance will have traveled between 1.6 and 3.1 miles (2.5 and 5 kilometers) and may have filled up to eight of its sample tubes.

Next, Perseverance will travel north, then west, toward the location of its second science campaign: Jezero Crater’s delta region. The delta is the fan-shaped remains of the confluence of an ancient river and a lake within Jezero Crater. The region may be especially rich in carbonate minerals. On Earth, such minerals can preserve fossilized signs of ancient microscopic life and are associated with biological processes.