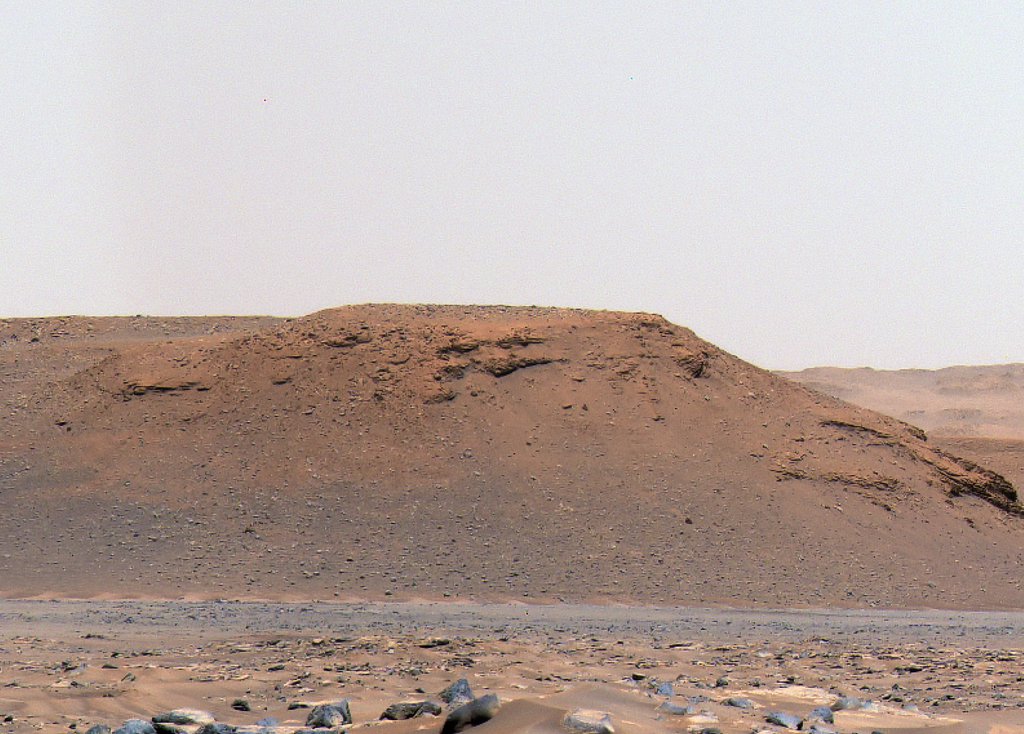 The escarpment the science team refers to as “Scarp a” is seen in this image captured by Perseverance rover’s Mastcam-Z instrument on Apr. 17, 2021. 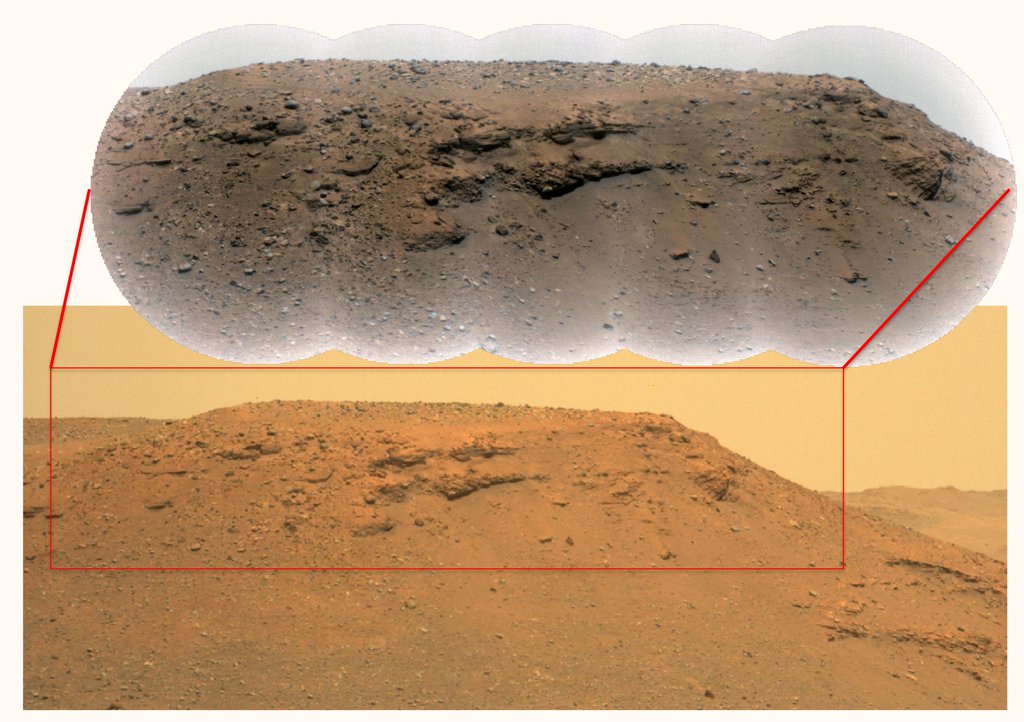 This annotated image indicates the locations of NASA’s Perseverance rover (lower right), as well as the “Kodiak” butte (lower left) and several prominent steep banks known as escarpments, or scarps, along the delta of Jezero Crater.

A new paper from the science team of NASA’s Perseverance Mars rover details how the hydrological cycle of the now-dry lake at Jezero Crater is more complicated and intriguing than originally thought. The findings are based on detailed imaging the rover provided of long, steep slopes called escarpments, or scarps in the delta, which formed from sediment accumulating at the mouth of an ancient river that long ago fed the crater’s lake.

The images reveal that billions of years ago, when Mars had an atmosphere thick enough to support water flowing across its surface, Jezero’s fan-shaped river delta experienced late-stage flooding events that carried rocks and debris into it from the highlands well outside the crater. 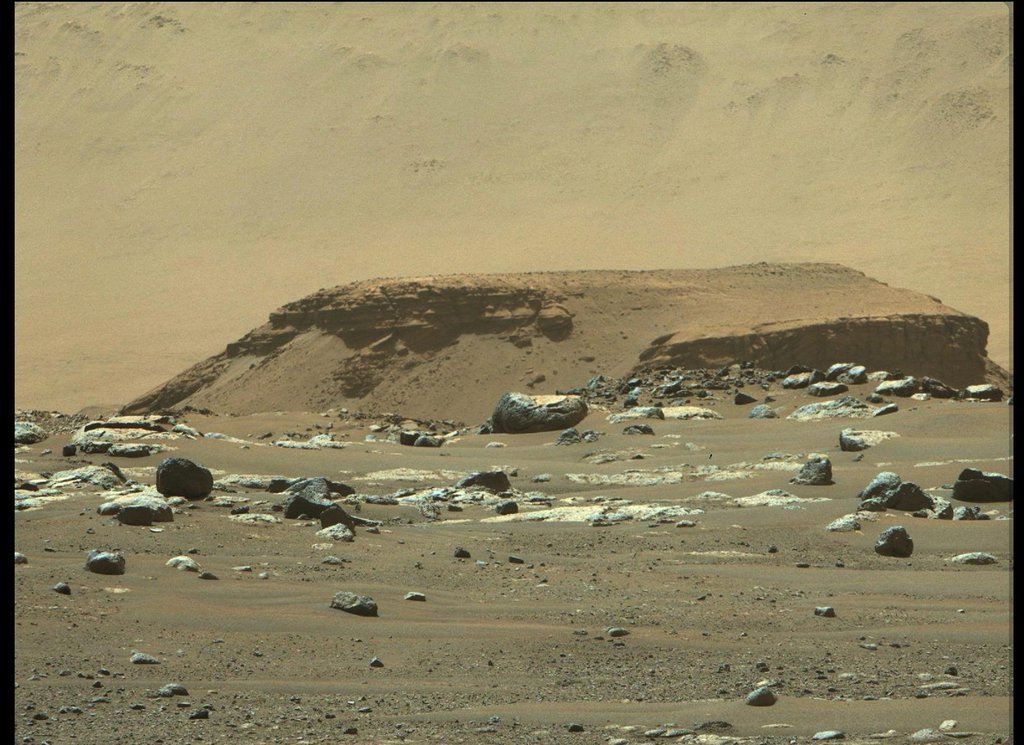 This image of “Kodiak” – one remnant of the fan-shaped deposit of sediments inside Mars’ Jezero Crater known as the delta – was taken by Perseverance’s Mastcam-Z instrument on Feb. 22, 2021.

Taken by the rover’s left and right Mastcam-Z cameras as well as its Remote Micro-Imager, or RMI (part of the SuperCam instrument), they also provide insight into where the rover could best hunt for rock and sediment samples, including those that may contain organic compounds and other evidence that life once existed there.

The rover team has long planned to visit the delta because of its potential for harboring signs of ancient microbial life. One of the mission’s primary goals is to collect samples that could be brought to Earth by the multi-mission Mars Sample Return effort, enabling scientists to analyze the material with powerful lab equipment too large to bring to Mars.

The paper on Perseverance’s scarp imagery – the first research to be published with data acquired after the rover’s Feb. 18 landing – was released online today in the journal Science.

“This is the key observation that enables us to once and for all confirm the presence of a lake and river delta at Jezero.”

At the time the images were taken, the scarps were to the northwest of the rover and about 1.2 miles (2.2 kilometers) away. Southwest of the rover, and at about the same distance, lies another prominent rock outcrop the team calls “Kodiak.” In its ancient past, Kodiak was at the southern edge of the delta, which would have been an intact geologic structure at the time.

Prior to Perseverance’s arrival, Kodiak had been imaged only from orbit. From the surface, the rover’s Mastcam-Z and RMI images revealed for the first time the stratigraphy – the order and position of rock layers, which provides information about the relative timing of geological deposits – along Kodiak’s eastern face. The inclined and horizontal layering there is what a geologist would expect to see in a river delta on Earth.

“Never before has such well-preserved stratigraphy been visible on Mars,” said Nicolas Mangold, a Perseverance scientist from the Laboratoire de Planétologie et Géodynamique in Nantes, France, and lead author of the paper. “This is the key observation that enables us to once and for all confirm the presence of a lake and river delta at Jezero. Getting a better understanding of the hydrology months in advance of our arrival at the delta is going to pay big dividends down the road.”

While the Kodiak results are significant, it is the tale told by the images of the scarps to the northeast that came as the greatest surprise to the rover science team.

The top mosaic of Jezero Crater’s river delta was stitched together from multiple images taken by the Mastcam-Z instrument aboard NASA’s Perseverance rover on Apr. 17, 2021. The bottom annotated image highlights the location of four prominent long, steep slopes known as escarpments, or scarps.

Imagery of those scarps showed layering similar to Kodiak’s on their lower halves. But farther up each of their steep walls and on top, Mastcam-Z and RMI captured stones and boulders.

“We saw distinct layers in the scarps containing boulders up to 5 feet [1.5 meters] across that we knew had no business being there,” said Mangold.

Those layers mean the slow, meandering waterway that fed the delta must have been transformed by later, fast-moving flash floods. Mangold and the science team estimate that a torrent of water needed to transport the boulders – some for tens of miles – would have to travel at speeds ranging from 4 to 20 mph (6 to 30 kph).

“These results also have an impact on the strategy for the selection of rocks for sampling,” said Sanjeev Gupta, a Perseverance scientist from Imperial College, London, and a co-author of the paper. “The finest-grained material at the bottom of the delta probably contains our best bet for finding evidence of organics and biosignatures. And the boulders at the top will enable us to sample old pieces of crustal rocks. Both are main objectives for sampling and caching rocks before Mars Sample Return.”

A Lake of Changing Depths

Early in the history of the Jezero Crater’s former lake, its levels are thought to have been high enough to crest the crater’s eastern rim, where orbital imagery shows the remains of an outflow river channel. The new paper adds to this thinking, describing the size of Jezero’s lake fluctuating greatly over time, its water level rising and falling by tens of yards before the body of water eventually disappeared altogether.

While it’s unknown if these swings in the water level resulted from flooding or more gradual environmental changes, the science team has determined that they occurred later in the Jezero delta’s history, when lake levels were at least 330 feet (100 meters) below the lake’s highest level. And the team is looking forward to making more insights in the future: The delta will be the starting point for the rover team’s upcoming second science campaign next year.

“A better understanding of Jezero’s delta is a key to understanding the change in hydrology for the area,” said Gupta, “and it could potentially provide valuable insights into why the entire planet dried out.”