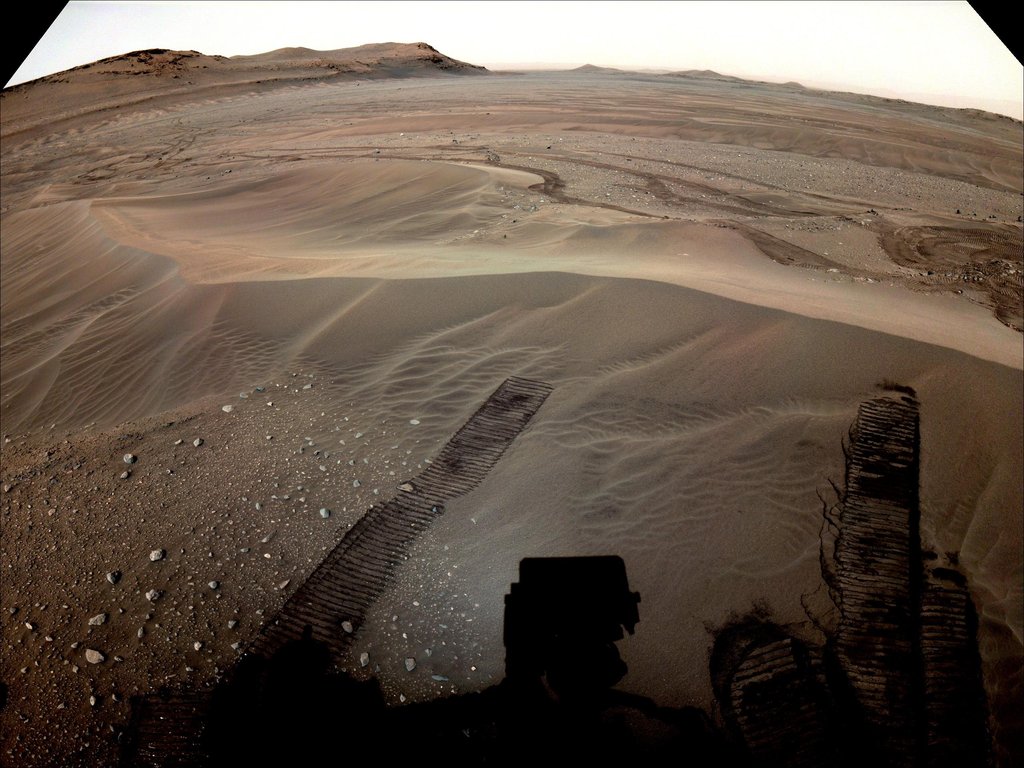 The location where NASA's Perseverance will begin depositing its first cache of samples is shown in this image taken by the Mars rover on Dec. 14, 2022.
Credit: NASA/JPL-Caltech/ASU/MSSS
Full Image Details 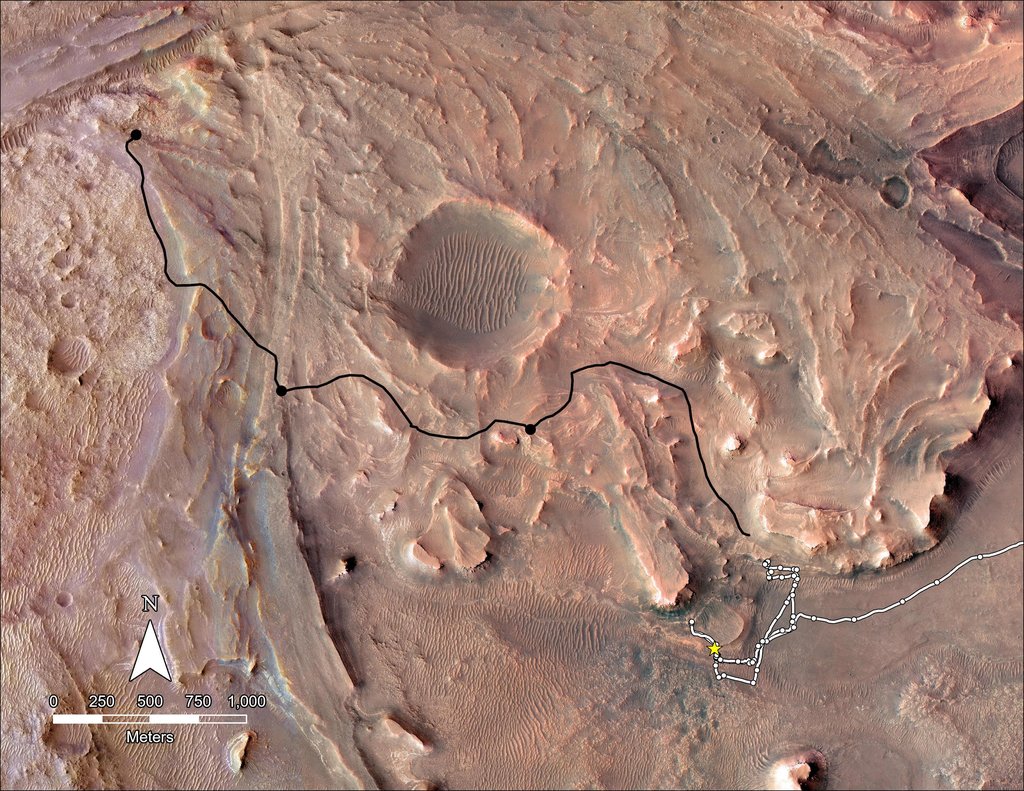 This map shows the planned route NASA's Perseverance Mars rover will take across the top of Jezero Crater's delta in 2023. The rover's planned route is in black while the ground it already covered is in white.
Credit: NASA/JPL-Caltech
Full Image Details 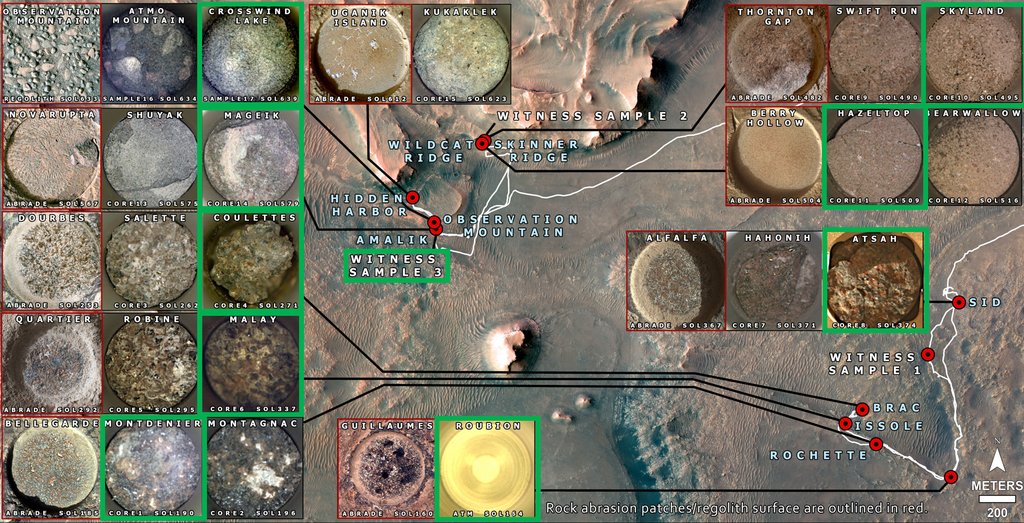 The 10 sample tubes being dropped on Mars’ surface so they can be studied on Earth in the future carry an amazing diversity of Red Planet geology.

In the coming days, NASA’s Perseverance rover is expected to begin building the first sample depot on another world. This will mark a crucial milestone in the NASA-ESA (European Space Agency) Mars Sample Return campaign, which aims to bring Mars samples to Earth for closer study.

The depot-building process starts when the rover drops one of its titanium sample tubes carrying a chalk-size core of rock from its belly 2.9 feet (88.8 centimeters) onto the ground at an area within Jezero Crater nicknamed “Three Forks.” Over the course of 30 or so days, Perseverance will deposit a total of 10 tubes that carry samples representing the diversity of the rock record in Jezero Crater.

The rover has been taking a pair of samples from each of its rock targets. Half of every pair will be deposited at Three Forks as a backup set, and the other half will remain inside Perseverance, which will be the primary means to convey the collected samples to the Mars launch vehicle as part of the campaign.

“The samples for this depot – and the duplicates held aboard Perseverance – are an incredible set representative of the area explored during the prime mission,” said Meenakshi Wadhwa, the Mars Sample Return program principal scientist from Arizona State University. “We not only have igneous and sedimentary rocks that record at least two and possibly four or even more distinct styles of aqueous alteration, but also regolith, atmosphere, and a witness tube.” 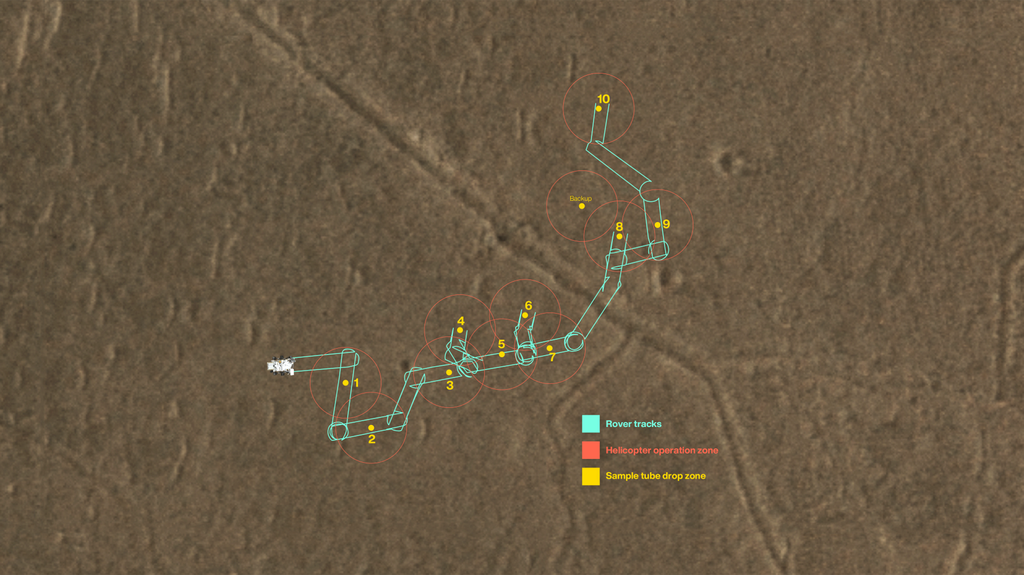 This map shows where NASA’s Perseverance Mars rover will be dropping 10 samples that a future mission could pick up. The orange circles represent areas where a Sample Recovery Helicopter could safely operate to acquire the sample tubes. Credit: NASA/JPL-Caltech Full Image Details

How to Build a Depot

One of the first requirements to build a sample depot on Mars is to find a level, rock-free stretch of terrain in Jezero Crater where there’s room for each tube to be deposited.

“Up to now, Mars missions required just one good landing zone; we need 11,” said Richard Cook, Mars Sample Return program manager at NASA’s Jet Propulsion Laboratory in Southern California. “The first one is for the Sample Retrieval Lander, but then we need 10 more in the vicinity for our Sample Recovery Helicopters to perform takeoffs and landings, and driving too.”

This short animation features key moments of NASA and ESA’s Mars Sample Return campaign, from landing on Mars and securing the sample tubes to launching them off the surface and ferrying them back to Earth.

After settling on a suitable site, the campaign’s next task was to figure out exactly where and how to deploy the tubes within that location. “You can’t simply drop them in a big pile because the recovery helicopters are designed to interact with only one tube at a time,” said Cook. The helicopters are intended to serve as a backup, just like the depot. To ensure a helicopter could retrieve samples without disturbing the rest of the depot or encountering any obstructions from the occasional rock or ripple, each tube-drop location will have an “area of operation” at least 18 feet (5.5 meters) in diameter. To that end, the tubes will be deposited on the surface in an intricate zigzag pattern, with each sample 16 to 49 feet (5 to 15 meters) apart from one another.

The depot’s success will depend on accurate placement of the tubes – a process that will take over a month. Before and after Perseverance drops each tube, mission controllers will review a multitude of images from the rover. This assessment will also give the Mars Sample Return team the precise data necessary to locate the tubes in the event of the samples becoming covered by dust or sand before they are collected.

“We will still be working the sample depot deployment when our extended mission begins on Jan. 7, so nothing changes from that perspective,” said Art Thompson, Perseverance’s project manager at JPL. “However, once the table is set at Three Forks, we’ll head to the top of the delta. The science team wants to take a good look around up there.”

Called the Delta Top Campaign, this new science phase will begin when Perseverance finishes its ascent of the delta’s steep embankment and arrives at the expanse that forms the upper surface of the Jezero delta, probably sometime in February. During this approximately eight-month campaign, the science team will be on the lookout for boulders and other materials that were carried from elsewhere on Mars and deposited by the ancient river that formed this delta.

“The Delta Top Campaign is our opportunity to get a glimpse at the geological process beyond the walls of Jezero Crater,” said JPL’s Katie Stack Morgan, deputy project scientist for Perseverance. “Billions of years ago a raging river carried debris and boulders from miles beyond the walls of Jezero. We are going to explore these ancient river deposits and obtain samples from their long-traveled boulders and rocks.”

A key objective for Perseverance’s mission on Mars is astrobiology, including caching samples that may contain signs of ancient microbial life. The rover will characterize the planet’s geology and past climate, pave the way for human exploration of the Red Planet, and be the first mission to collect and cache Martian rock and regolith.

The NASA-ESA Mars Sample Return Campaign will revolutionize humanity’s understanding of Mars by bringing scientifically selected samples to Earth for study using the most sophisticated instruments around the world. The campaign would fulfill a solar system exploration goal, a high priority since the 1970s and in the last three National Academy of Sciences Planetary Decadal Surveys.

This strategic NASA and ESA partnership would be the first mission to return samples from another planet and the first launch from the surface of another planet. The samples collected by Perseverance during its exploration of an ancient river delta are thought to present the best opportunity to reveal the early evolution of Mars, including the potential for life. By better understanding the history of Mars, we would improve our understanding of all rocky planets in the solar system, including Earth.

Where Is Perseverance Right Now?
Listen to JPL’s ‘On a Mission’ podcast season about Mars rovers