The drill hole from Perseverance's second sample-collection attempt can be seen, in this composite of two images taken on Sept. 1, 2021, by one of the Perseverance rover's navigation cameras.
Credit: NASA/JPL-Caltech
Full Image Details 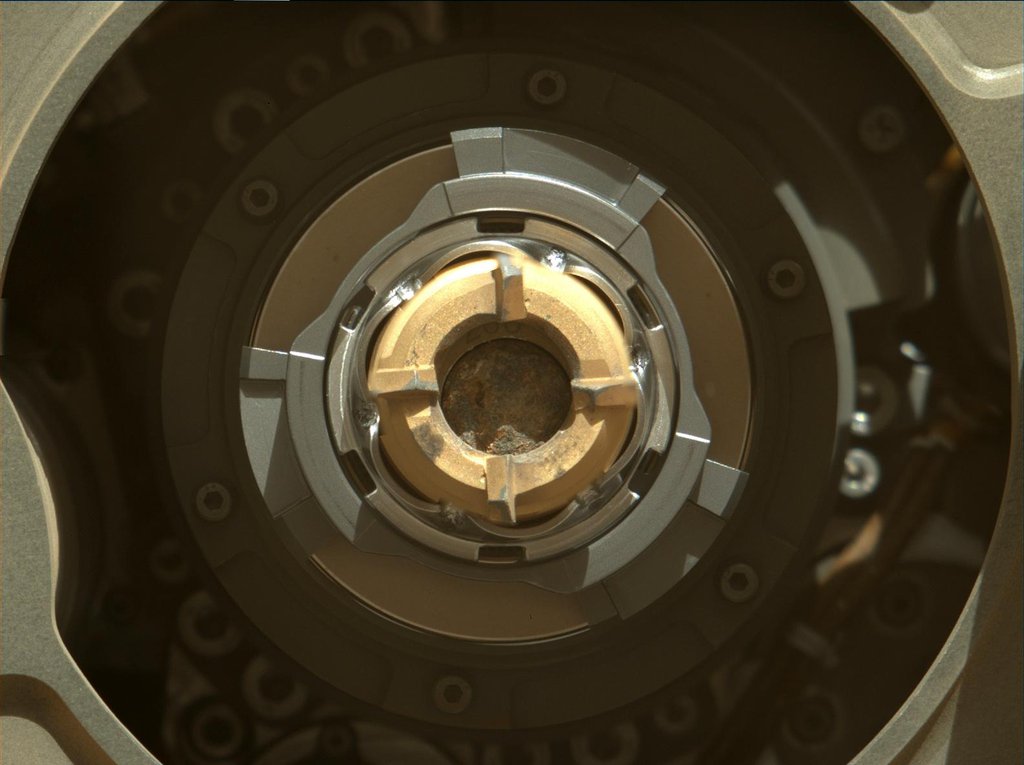 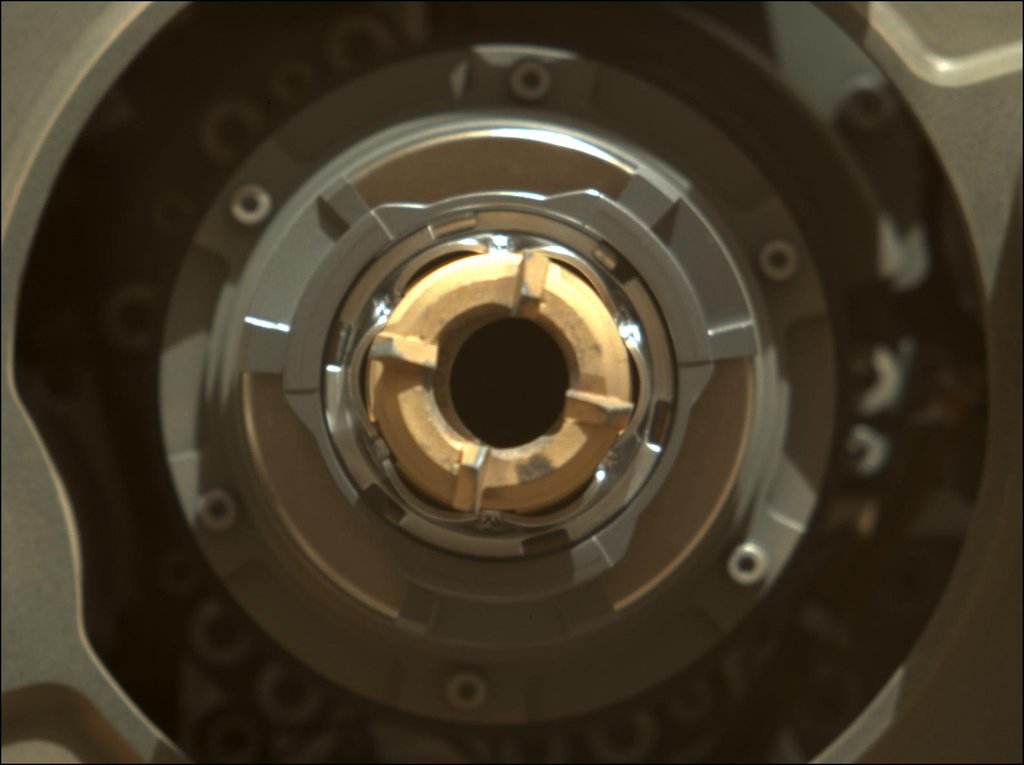 Perseverance will obtain additional imagery of the sample tube before potentially completing the process of collecting its first scientifically-selected Mars sample.

Data received late Sept. 1 from NASA’s Perseverance rover indicate the team has achieved its goal of successfully coring a Mars rock. The initial images downlinked after the historic event show an intact sample present in the tube after coring. However, additional images taken after the arm completed sample acquisition were inconclusive due to poor sunlight conditions. Another round of images with better lighting will be taken before the sample processing continues.

Obtaining additional imagery prior to proceeding with the sealing and storing of Mars rock sample is an extra step the team opted to include based on its experience with the rover’s sampling attempt on Aug. 5. Although the Perseverance mission team is confident that the sample is in the tube, images in optimal lighting conditions will confirm its presence.

Perseverance’s Sampling and Caching System uses a rotary-percussive drill and a hollow coring bit at the end of its 7-foot-long (2-meter-long) robotic arm to extract samples slightly thicker than a pencil. Within the bit during coring is a sample tube. After completing yesterday’s coring, Perseverance maneuvered the corer, bit, and open end of the sample tube in order to be imaged by the rover’s Mastcam-Z instrument. The target for the sample collection attempt was a briefcase-size rock belonging to a ridgeline that is more than half-a-mile (900 meters) long and contains rock outcrops and boulders.

The initial set of images from Mastcam-Z showed the end of a cored rock within the sample tube. After taking these images, the rover began a procedure called “percuss to ingest,” which vibrates the drill bit and tube for one second, five separate times. The movement is designed to clear the lip of the sample tube of any residual material. The action can also cause a sample to slide down farther into the tube. After the rover finished the percuss-to-ingest procedure, it took a second set of Mastcam-Z images. In these images, the lighting is poor, and internal portions of the sample tube are not visible.

“The project got its first cored rock under its belt, and that’s a phenomenal accomplishment,” said Jennifer Trosper, project manager at NASA’s Jet Propulsion Laboratory in Southern California. “The team determined a location, and selected and cored a viable and scientifically valuable rock. We did what we came to do. We will work through this small hiccup with the lighting conditions in the images and remain encouraged that there is sample in this tube.”

Commands uplinked to the rover earlier today will result in images of the corer and tube to be acquired tomorrow, Sept. 3, at times of day on Mars when the Sun is angled in a more favorable position. Photos will also be taken after sunset to diminish point-sources of light that can saturate an image. The photos will be returned to Earth early in the morning of Sept. 4.

If the results of this additional imaging remain inconclusive, the Perseverance team still has several options to choose from going forward, including using the Sampling and Caching System’s volume probe (located inside the rover’s chassis) as a final confirmation of the sample being in the tube.

The Sept. 1 coring is the second time that Perseverance has employed its Sampling and Caching System since landing in Jezero Crater on Feb. 18, 2021.