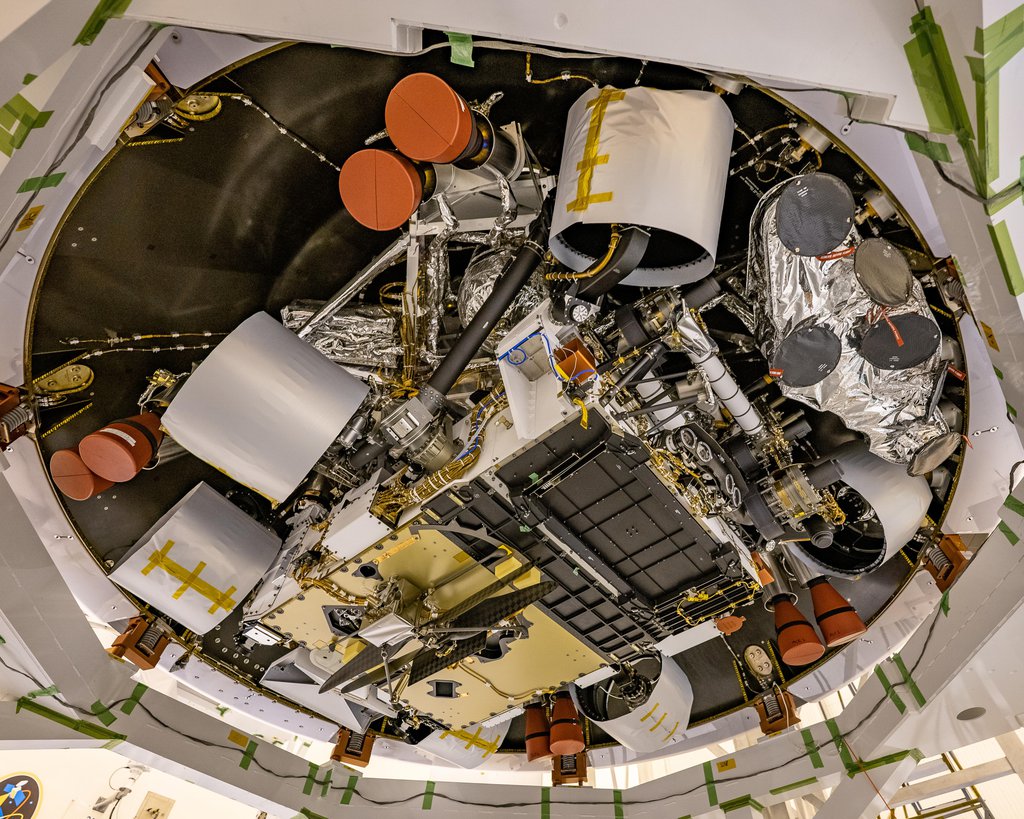 NASA's Mars Perseverance rover's descent stage was recently stacked atop the rover at Kennedy Space Center, and the two were placed in their back shell.
Credit: NASA/JPL-Caltech
Full Image Details 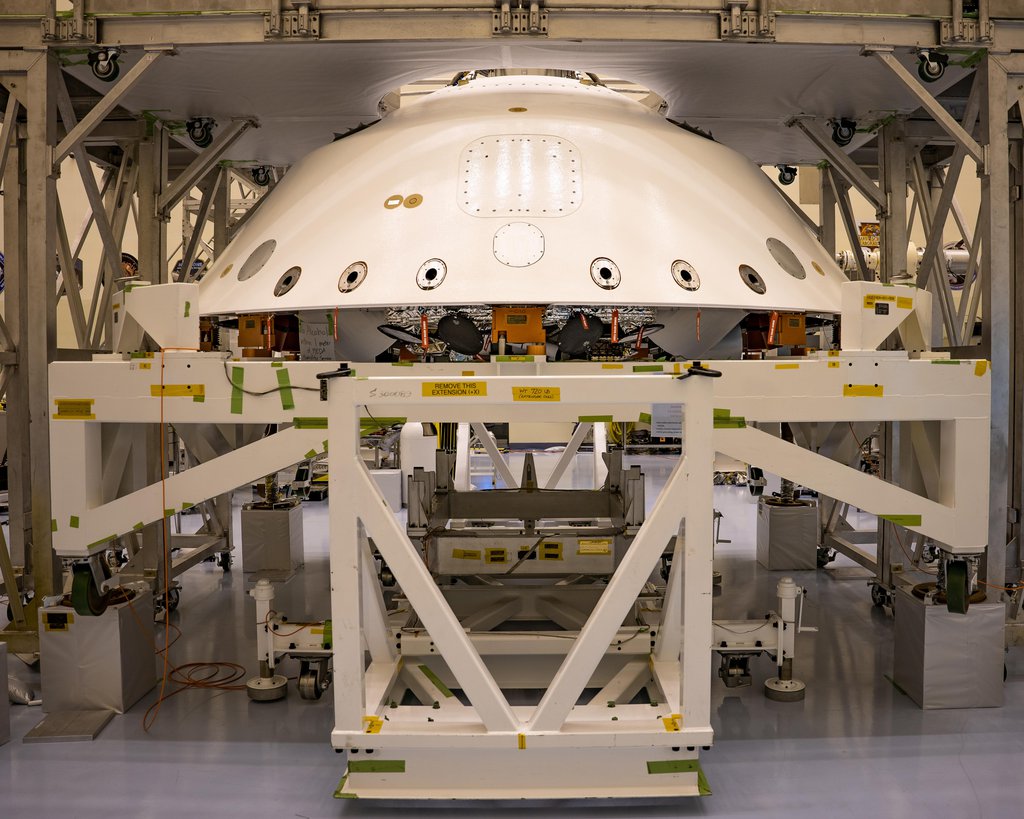 The cone-shaped back shell for NASA's Perseverance rover mission is shown in this April 29, 2020, image from the Kennedy Space Center in Florida.
Credit: NASA/JPL-Caltech
Full Image Details 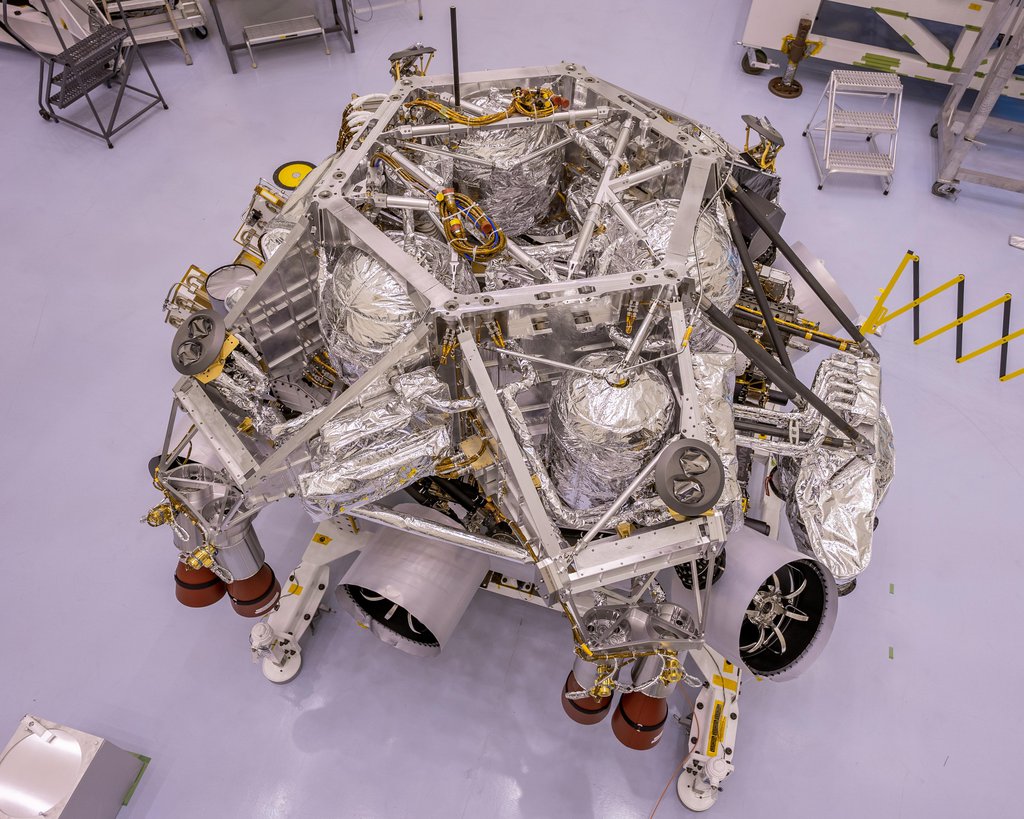 This image of the rocket-powered descent stage sitting on to of NASA's Perseverance rover was taken in a clean room at Kennedy Space Center on April 29, 2020.
Credit: NASA/JPL-Caltech
Full Image Details

Stacking spacecraft components on top of each other is one of the final assembly steps before a mission launches to the Red Planet.

Engineers working on NASA's Perseverance rover mission at the Kennedy Space Center in Florida have begun the process of placing the Mars-bound rover and other spacecraft components into the configuration they'll be in as they ride on top of the United Launch Alliance Atlas V rocket. The launch period for the mission opens on July 17 - just 70 days from now.

Called "vehicle stacking," the process began on April 23 with the integration of the rover and its rocket-powered descent stage. One of the first steps in the daylong operation was to lift the descent stage onto Perseverance so that engineers could connect the two with flight-separation bolts.

When it's time for the rover to touch down on Mars, these three bolts will be released by small pyrotechnic charges, and the spacecraft will execute the sky crane maneuver: Nylon cords spool out through what are called bridle exit guides to lower the rover 25 feet (7.6 meters) below the descent stage. Once Perseverance senses it's on the surface, pyrotechnically-fired blades will sever the cords, and the descent stage flies off. The sky crane maneuver ensures Perseverance will land on the Martian surface free of any other spacecraft components, eliminating the need for a complex deployment procedure.

"Attaching the rover to the descent stage is a major milestone for the team because these are the first spacecraft components to come together for launch, and they will be the last to separate when we reach Mars," said David Gruel, the Perseverance rover assembly, test, and launch operations manager at NASA's Jet Propulsion Laboratory in Southern California, which manages rover operations. "These two assemblies will remain firmly nestled together until they are about 65 feet [20 meters] over the surface of Mars."

Whether they are working on final assembly of the vehicle at Kennedy Space Center, testing software and subsystems at JPL or (as the majority of the team is doing) teleworking due to coronavirus safety precautions, the Perseverance team remains on track to meet the opening of the rover's launch period. No matter what day Perseverance launches, it will land at Mars' Jezero Crater on Feb. 18, 2021.