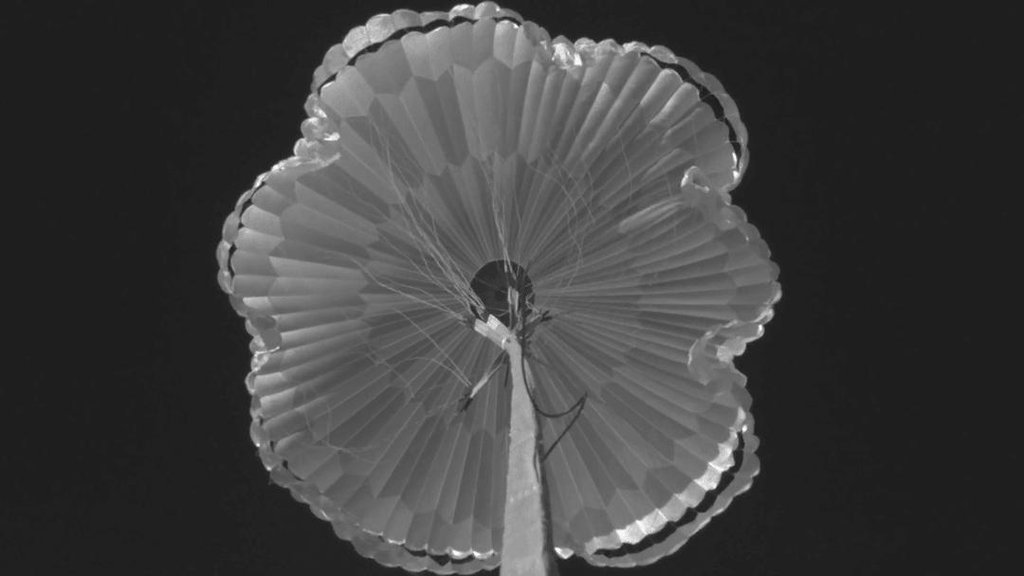 This animated GIF shows a successful test of the parachute that will be used to land NASA's Perseverance rover on Mars.
Credit: NASA/JPL-Caltech
Full Image Details

The agency's new Mars rover is put through a series of tests in vacuum chambers, acoustic chambers and more to get ready for the Red Planet.

While auto manufacturers built over 92 million motor vehicles for this world in 2019, NASA built just one for Mars. The Perseverance Mars rover is one of a kind, and the testing required to get it ready to roll on the mean (and unpaved) streets of the Red Planet is one of a kind as well.

Because hardware cannot be repaired once the rover is on Mars, the team has to build a vehicle that can survive for years on a planet with punishing temperature shifts, constant radiation and ever-present dust. To ensure readiness, they put Perseverance through a test program tougher than the trip to Mars and the environment it will encounter once there.

This video highlights some of the tests NASA's Perseverance rover completed between September and December 2019 at the Jet Propulsion Laboratory in Southern California.

"Mars is hard, and everybody knows that," said project manager John McNamee of NASA's Jet Propulsion Laboratory in Southern California. "What they may not realize is that to be successful at Mars, you have to test the absolute heck out of the thing here on Earth."

While the unique tests performed for the project number in the thousands, here's a handful that stand out.

The Sound and Fury

It is no secret that loud noises can be detrimental to your hearing. They can also be detrimental to a spacecraft, at least when they're at the level encountered atop the launch vehicle during liftoff. Those punishing decibels can actually cause parts and components to come loose.

Long before the rover was shipped to Kennedy Space Center in Florida in preparation for this summer's launch, engineers put it in a special chamber at JPL and, using nitrogen-charged speakers, blasted away at it with random waves of sound as high as about 143 decibels - louder than what you'd encounter standing behind a roaring jet engine. On several occasions during the daylong acoustical test, they halted to inspect the rover and its surroundings, looking for anything that might have loosened, broken or fallen off. Some fasteners attaching spacecraft components had to be tightened and a few electrical cables replaced, but the mission team came away with increased confidence that while Perseverance will certainly be shaken during launch, nothing should stir. 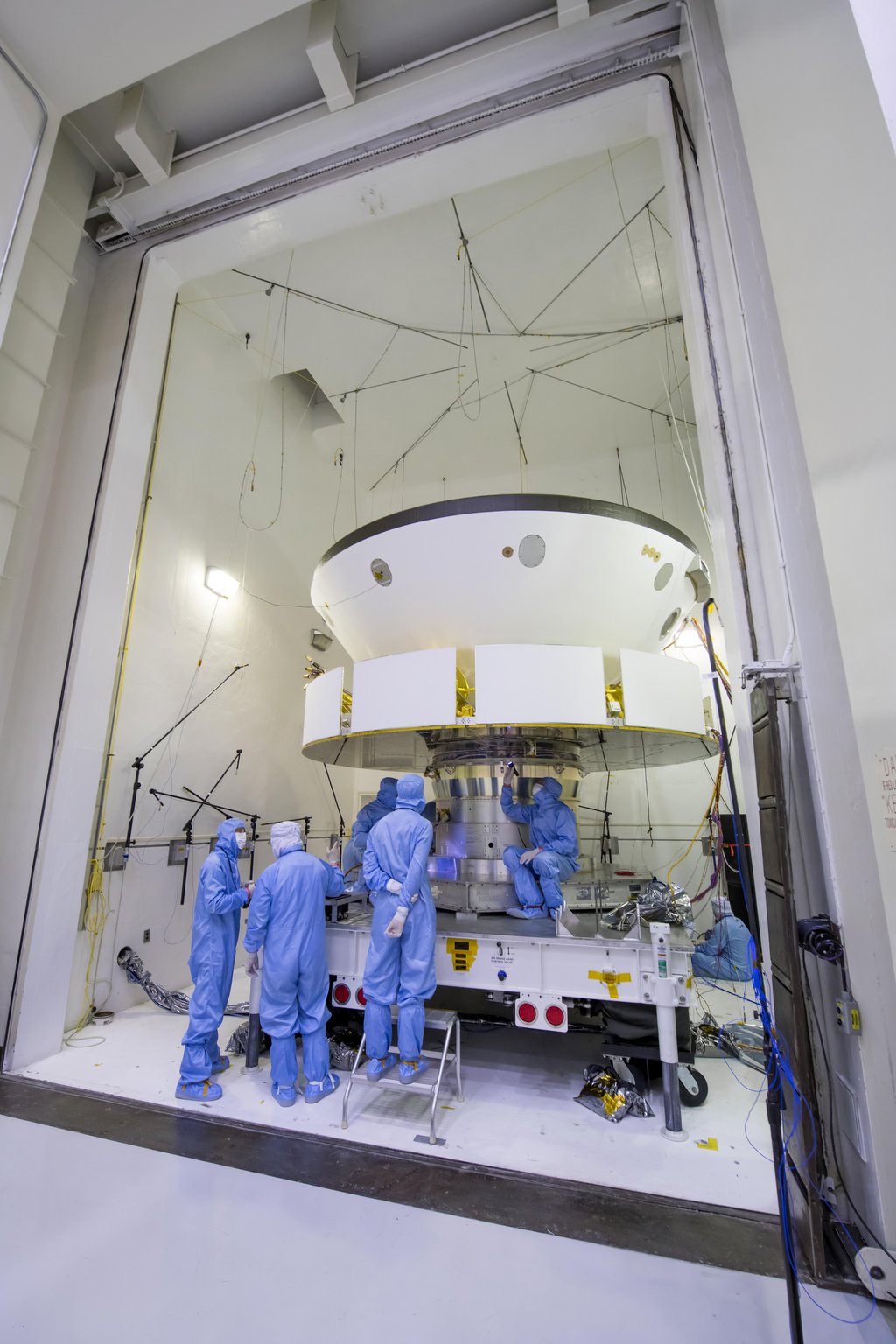 The spacecraft that will carry NASA's Perseverance rover to Mars is examined prior to an acoustic test in the Environmental Test Facility at the Jet Propulsion Laboratory in Southern California.
Credit: NASA/JPL-Caltech
Full Image Details

Ask any member of the Mars 2020 mission's entry, descent and landing team, and they'll tell you there's little point in traveling through 314 million miles (505 million kilometers) of interplanetary space if you can't stick the landing. At 70.5 feet (21.5 meters) in diameter, the rover's supersonic parachute has everything to do with making that happen. A lot of work goes into ensuring a chute deploys right and can do the job without shredding or getting tangled.

Perseverance's parachute is based on the design successfully flown by Mars Curiosity in 2012. However, since Perseverance is slightly heavier than Curiosity, engineers strengthened their parachute design. But how to be sure it will do what is expected of it? Test, test, test.

First, the team focused on verifying the chute would hold up under the strain of slowing a fast-moving spacecraft down in the Martian atmosphere. In the summer of 2017, they traveled to the National Full-Scale Aerodynamics Complex at NASA's Ames Research in California's Silicon Valley to observe trial chute deployments close up in a wind tunnel, checking workmanship and looking for any unexpected behavior. 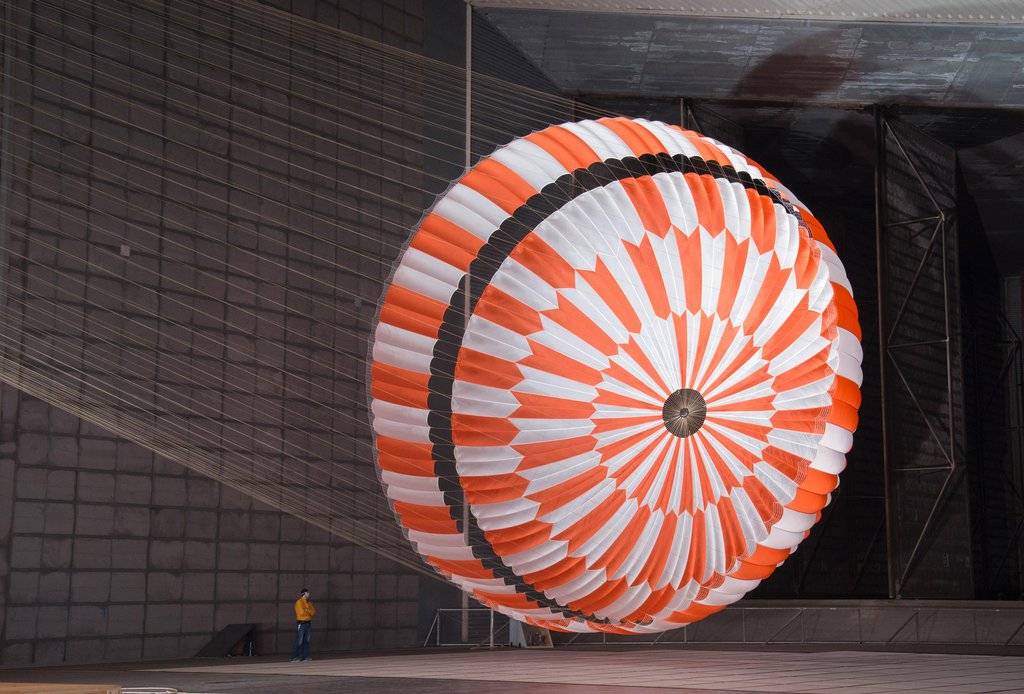 More complex evaluations would come between March and September 2018. The team tested the chute three times in Mars-relevant conditions, using Black Brant IX sounding rockets launched from NASA's Wallops Flight Research Facility in Virginia. The final test flight, on Sept. 7, exposed the chute to a 67,000-pound (37,000-kilogram) load - the highest ever survived by a supersonic parachute and about 85% higher than what the mission's chute is expected to encounter during deployment in Mars' atmosphere.

The team also tested the chute's deployment mortar. Perseverance's parachute is packed into an aluminum canister so tightly, it has the density of oak. The mortar is a cylindrical canister cradled atop the aeroshell, which encapsulates the rover. At the time of deployment, an explosive propellant at the base of the mortar will launch the carefully bundled array of nylon, Technora and Kevlar at just the right velocity and trajectory into the Martian slipstream. 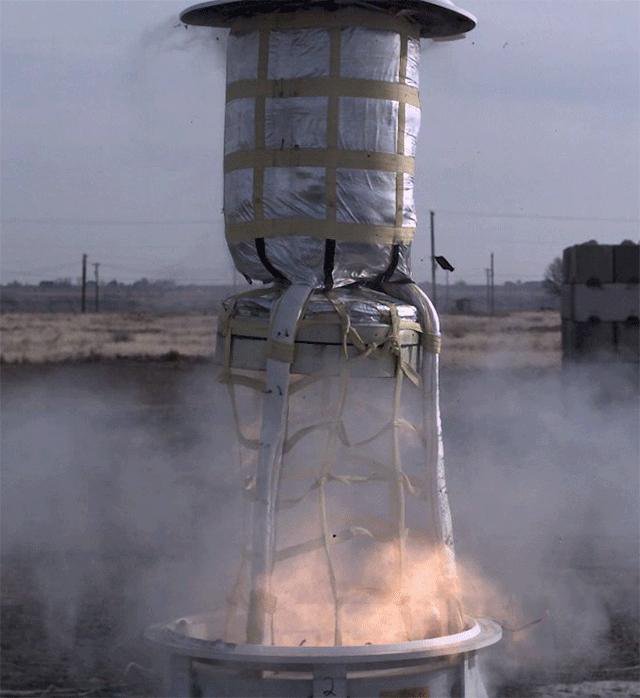 This animated GIF shows a test of the mortar system that will be used on Feb. 18, 2021, to deploy the parachute for NASA's Perseverance rover.
Credit: NASA/JPL-Caltech
Full Image Details

The Sun's rays heat a white-painted rover differently than they would, say, a Mars boulder. To better understand what temperature-sensitive instruments and subsystems will encounter, the team tested Perseverance's "thermal model." In October 2019, they placed the rover in JPL's 25-foot-wide, 85-foot-tall (8-meter-by-26-meter) vacuum chamber for a daylong test, where powerful xenon lamps several floors below beamed upward, hitting a mirror at the top of the chamber to drench the spacecraft with light.

After the lamps warmed up and reached the same intensity of sunlight the rover will encounter at its landing site in Jezero Crater, an engineer climbed in and measured the "sunlight" reaching different portions of the rover. Data from the test was used to update the rover's thermal model, giving the team the assurance they needed to proceed with next step in ground-based cold testing.

Once the solar-intensity tests concluded, engineers closed the doors and evacuated the majority of the atmosphere in the chamber to simulate Mars' thin atmosphere, which has about 1% the atmospheric density of Earth. Then the chamber was chilled to minus 200 degrees Fahrenheit (minus 129 degrees Celsius), and for a weeklong subsystems check, they ran computer programs, raised the remote sensing mast and antennas, turned wheels, and deployed the Mars Helicopter to make sure the rover can handle even the coldest Martian nights. 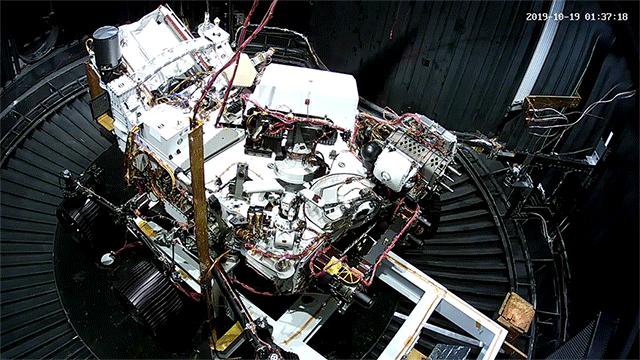 The Mars 2020 mission is launching 25 cameras to the Red Planet, a record number for an interplanetary expedition. After installation, each camera bound for the Red Planet had to undergo an "eye" exam.

With a camera called WATSON, which is tasked with taking close-up pictures and (if needed) video of rock textures, project engineers recorded the scene as they danced and waved. The goal: to determine the imager's frame rate and exposure time, and the ability of its computer to hold and transfer the data.

For other imagers, the test was a little more formal and rigorous. The process is called machine-vision calibration and involves using target boards featuring grids to establish a baseline for a camera's optical performance. The result? The mission's vision was 2020. 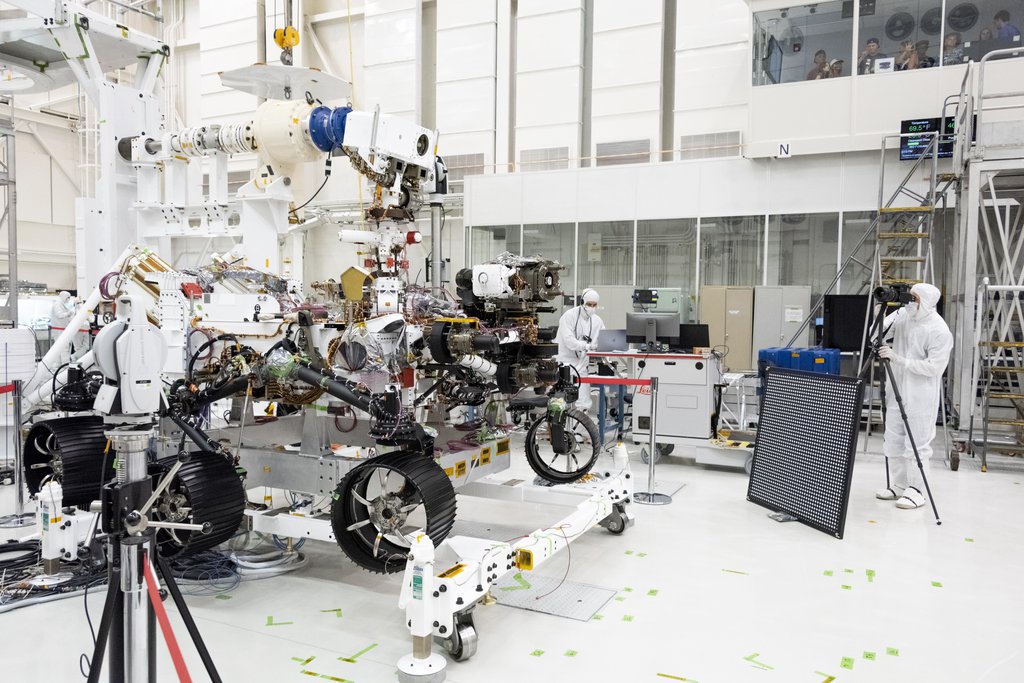 In this image, engineers test cameras on the top of the mast and front chassis of NASA's Perseverance Mars rover.
Credit: NASA/JPL-Caltech
Full Image Details

Whether they are working on final assembly of the vehicle at Kennedy Space Center, testing software and subsystems at JPL, or (as the majority of the team is doing) teleworking due to coronavirus safety precautions, the Perseverance team remains on track to meet the opening of the rover's launch period. No matter what day Perseverance launches, it will land at Mars' Jezero Crater on Feb. 18, 2021.