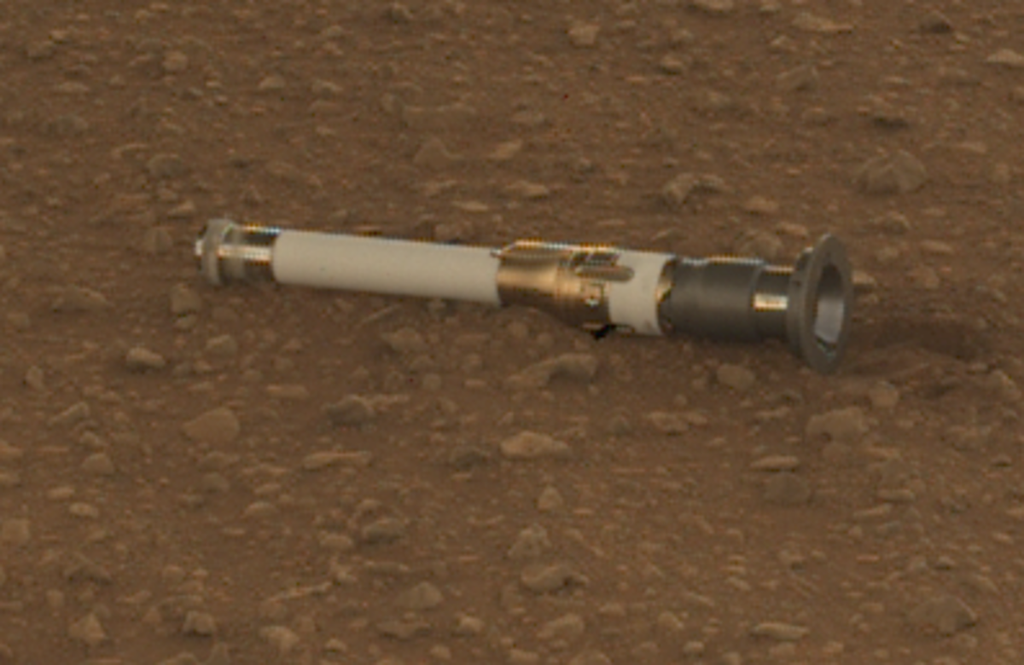 NASA’s Perseverance rover deposited the first of several samples onto the Martian surface on Dec. 21, 2022, the 653rd Martian day, or sol, of the mission. 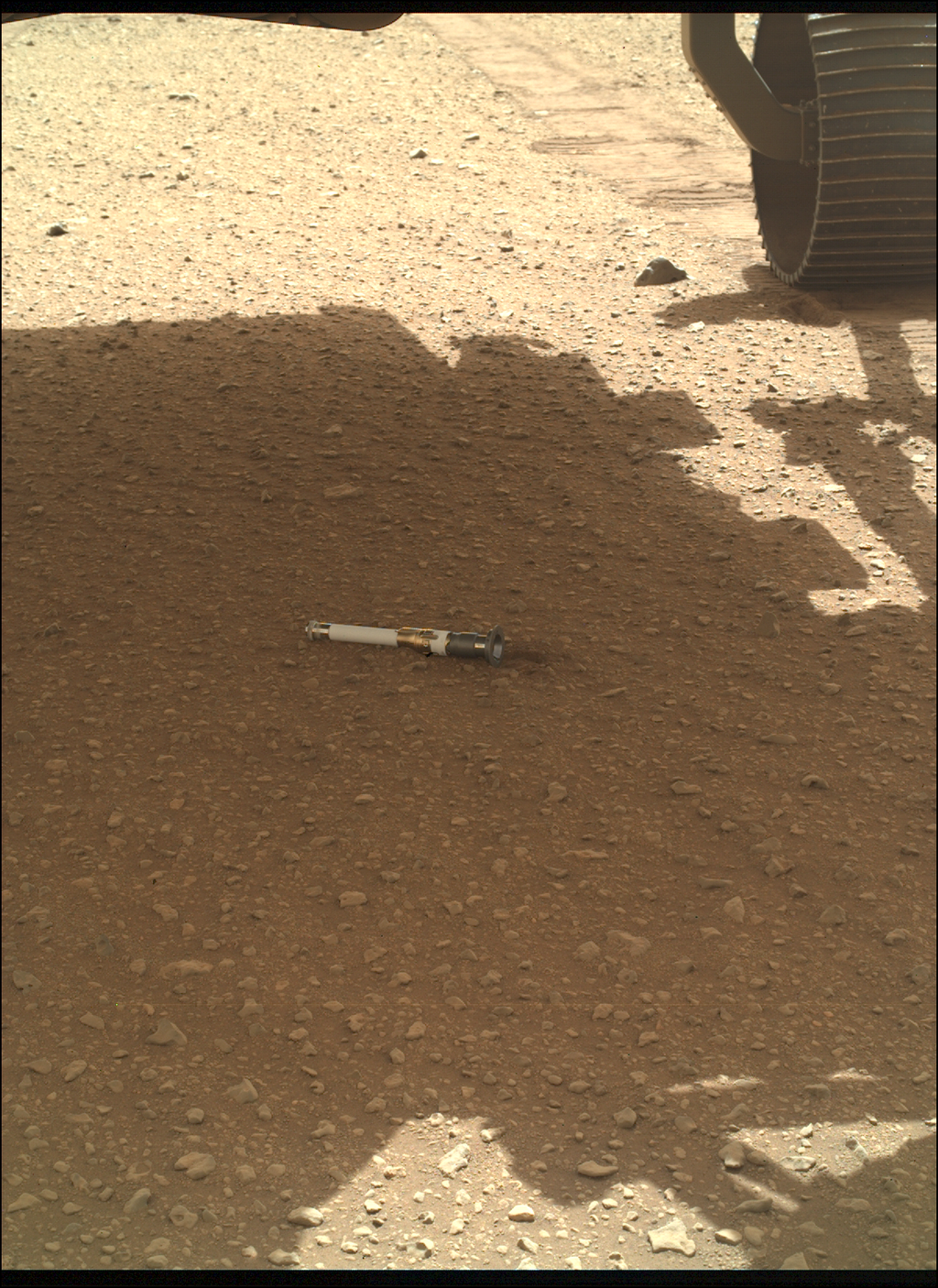 Once the Perseverance team confirmed the first sample tube was on the surface, they positioned the WATSON camera located at the end of the rover’s robotic arm to peer beneath the rover, checking to be sure that the tube hadn’t rolled into the path of the wheels.

Filled with rock, the sample tube will be one of 10 forming a depot of tubes that could be considered for a journey to Earth by the Mars Sample Return campaign.

A titanium tube containing a rock sample is resting on the Red Planet’s surface after being placed there on Dec. 21 by NASA’s Perseverance Mars rover. Over the next two months, the rover will deposit a total of 10 tubes at the location, called “Three Forks,” building humanity’s first sample depot on another planet. The depot marks a historic early step in the Mars Sample Return campaign.

Perseverance has been taking duplicate samples from rock targets the mission selects. The rover currently has the other 17 samples (including one atmospheric sample) taken so far in its belly. Based on the architecture of the Mars Sample Return campaign, the rover would deliver samples to a future robotic lander. The lander would, in turn, use a robotic arm to place the samples in a containment capsule aboard a small rocket that would blast off to Mars orbit, where another spacecraft would capture the sample container and return it safely to Earth.

Engineers use OPTIMISM, a full-size replica of NASA’s Perseverance rover, to test how it will deposit its first sample tube on the Martian surface. The test was conducted in the Mars Yard at JPL.

The depot will serve as a backup if Perseverance can’t deliver its samples. In that case, a pair of Sample Recovery Helicopters would be called upon to finish the job.

The first sample to drop was a chalk-size core of igneous rock informally named “Malay,” which was collected on Jan. 31, 2022, in a region of Mars’ Jezero Crater called “South Séítah.” Perseverance’s complex Sampling and Caching System took almost an hour to retrieve the metal tube from inside the rover’s belly, view it one last time with its internal CacheCam, and drop the sample roughly 3 feet (89 centimeters) onto a carefully selected patch of Martian surface.

Engineers react with surprise while testing how NASA’s Perseverance rover will deposit its sample tubes on the Martian surface. Less than 5% of the time, a flat end on the sample tube caused it to land straight up after dropping.

But the job wasn’t done for engineers at NASA’s Jet Propulsion Laboratory in Southern California, which built Perseverance and leads the mission. Once they confirmed the tube had dropped, the team positioned the WATSON camera located at the end of Perseverance’s 7-foot-long (2-meter-long) robotic arm to peer beneath the rover, checking to be sure that the tube hadn’t rolled into the path of the rover’s wheels.

They also wanted to ensure the tube hadn’t landed in such a way that it was standing on its end (each tube has a flat end piece called a “glove” to make it easier to be picked up by future missions). That occurred less than 5% of the time during testing with Perseverance’s Earthly twin in JPL’s Mars Yard. In case it does happen on Mars, the mission has written a series of commands for Perseverance to carefully knock the tube over with part of the turret at the end of its robotic arm.

This short animation features key moments of NASA and ESA’s Mars Sample Return campaign, from landing on Mars and securing the sample tubes to launching them off the surface and ferrying them back to Earth.

In coming weeks, they’ll have other opportunities to see whether Perseverance needs to use the technique as the rover deposits more samples at the Three Forks cache.

“Seeing our first sample on the ground is a great capstone to our prime mission period, which ends on Jan. 6,” said Rick Welch, Perseverance’s deputy project manager at JPL. “It’s a nice alignment that, just as we’re starting our cache, we’re also closing this first chapter of the mission.”

Where Is Perseverance Right Now?
Listen to JPL’s ‘On a Mission’ podcast season about Mars rovers