This video clip shows a 3D printing technique where a printer head scans over each layer of a part, blowing metal powder which is melted by a laser. It's one of several ways parts are 3D printed at NASA's Jet Propulsion Laboratory, but was not used to create the parts aboard the Perseverance rover.
Credit: NASA/JPL-Caltech 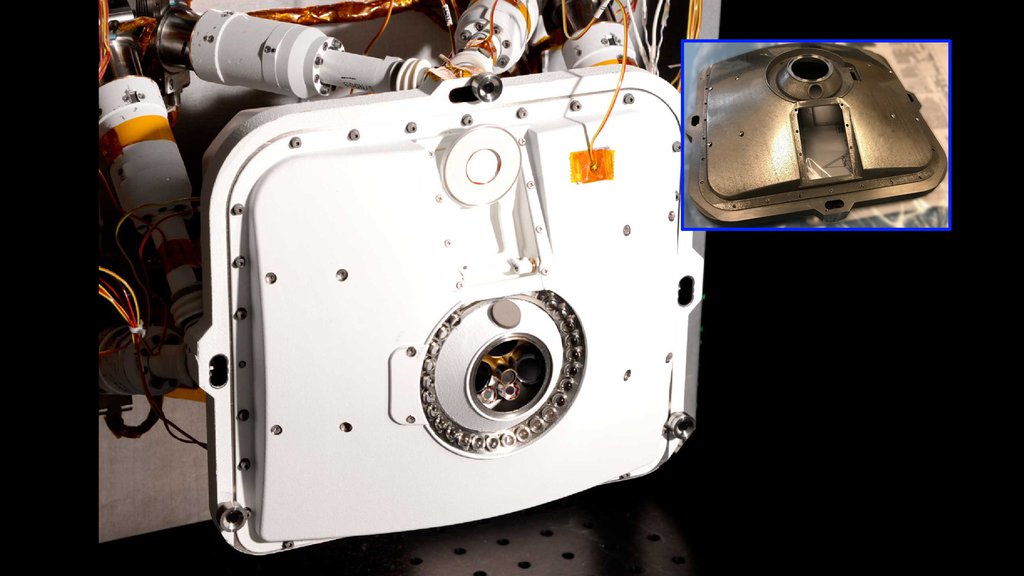 The outer shell of PIXL, one of the instruments aboard NASA's Perseverance Mars rover, includes several parts that were made of 3D-printed titanium. The inset shows the front half of the two-piece shell part it was finished.
Credit: NASA/JPL-Caltech 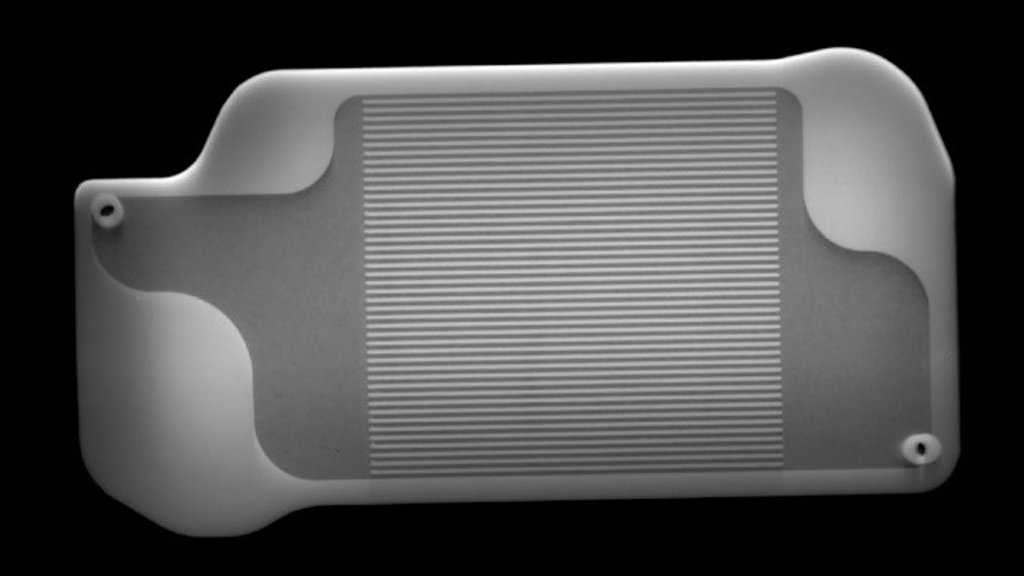 This X-ray image shows the inside of a 3D-printed part inside of Perseverance's MOXIE instrument. Martian air will be carried inside the tiny channels in the center of this part, where they'll be pre-heated. X-ray images like these are used to check for defects inside of parts; in this case, engineers checked to make sure the channels were free of 3D printing powder.
Credit: NASA/JPL-Caltech

If you want to see science fiction at work, visit a modern machine shop, where 3D printers create materials in just about any shape you can imagine. NASA is exploring the technique - known as additive manufacturing when used by specialized engineers - to build rocket engines as well as potential outposts on the Moon and Mars. Nearer in the future is a different milestone: NASA's Perseverance rover, which lands on the Red Planet on Feb. 18, 2021, carries 11 metal parts made with 3D printing.

Instead of forging, molding, or cutting materials, 3D printing relies on lasers to melt powder in successive layers to give shape to something. Doing so allows engineers to play with unique designs and traits, such as making hardware lighter, stronger, or responsive to heat or cold.

"It's like working with papier-mâché," said Andre Pate, the group lead for additive manufacturing at NASA's Jet Propulsion Laboratory in Southern California. "You build each feature layer by layer, and soon you have a detailed part."

Curiosity, Perseverance's predecessor, was the first mission to take 3D printing to the Red Planet. It landed in 2012 with a 3D-printed ceramic part inside the rover's ovenlike Sample Analysis at Mars (SAM) instrument. NASA has since continued to test 3D printing for use in spacecraft to make sure the reliability of the parts is well understood.

As "secondary structures," Perseverance's printed parts wouldn't jeopardize the mission if they didn't work as planned, but as Pate said, "Flying these parts to Mars is a huge milestone that opens the door a little more for additive manufacturing in the space industry."

A Shell for PIXL

Of the 11 printed parts going to Mars, five are in Perseverance's PIXL instrument. Short for the Planetary Instrument for X-ray Lithochemistry, the lunchbox-size device will help the rover seek out signs of fossilized microbial life by shooting X-ray beams at rock surfaces to analyze them.

PIXL shares space with other tools in the 88-pound (40-kilogram) rotating turret at the end of the rover's 7-foot-long (2-meter-long) robotic arm. To make the instrument as light as possible, the JPL team designed PIXL's two-piece titanium shell, a mounting frame, and two support struts that secure the shell to the end of the arm to be hollow and extremely thin. In fact, the parts, which were 3D printed by a vendor called Carpenter Additive, have three or four times less mass than if they'd been produced conventionally.

"In a very real sense, 3D printing made this instrument possible," said Michael Schein, PIXL's lead mechanical engineer at JPL. "These techniques allowed us to achieve a low mass and high-precision pointing that could not be made with conventional fabrication."

MOXIE Turns Up the Heat

Perseverance's six other 3D-printed parts can be found in an instrument called the Mars Oxygen In-Situ Resource Utilization Experiment, or MOXIE. This device will test technology that, in the future, could produce industrial quantities of oxygen to create rocket propellant on Mars, helping astronauts launch back to Earth.

To create oxygen, MOXIE heats Martian air up to nearly 1,500 degrees Fahrenheit (800 degrees Celsius). Within the device are six heat exchangers - palm-size nickel-alloy plates that protect key parts of the instrument from the effects of high temperatures.

While a conventionally machined heat exchanger would need to be made out of two parts and welded together, MOXIE's were each 3D-printed as a single piece at nearby Caltech, which manages JPL for NASA.

"These kinds of nickel parts are called superalloys because they maintain their strength even at very high temperatures," said Samad Firdosy, a material engineer at JPL who helped develop the heat exchangers. "Superalloys are typically found in jet engines or power-generating turbines. They're really good at resisting corrosion, even while really hot."

Although the new manufacturing process offers convenience, each layer of alloy that the printer lays down can form pores or cracks that can weaken the material. To avoid this, the plates were treated in a hot isostatic press - a gas crusher - that heats material to over 1,832 degrees Fahrenheit (1,000 degrees Celsius) and adds intense pressure evenly around the part. Then, engineers used microscopes and lots of mechanical testing to check the microstructure of the exchangers and ensure they were suitable for spaceflight.

"I really love microstructures," Firdosy said. "For me to see that kind of detail as material is printed, and how it evolves to make this functional part that's flying to Mars - that's very cool."

JPL, which is managed for NASA by Caltech in Pasadena, Southern California, built and manages operations of the Perseverance and Curiosity rovers.