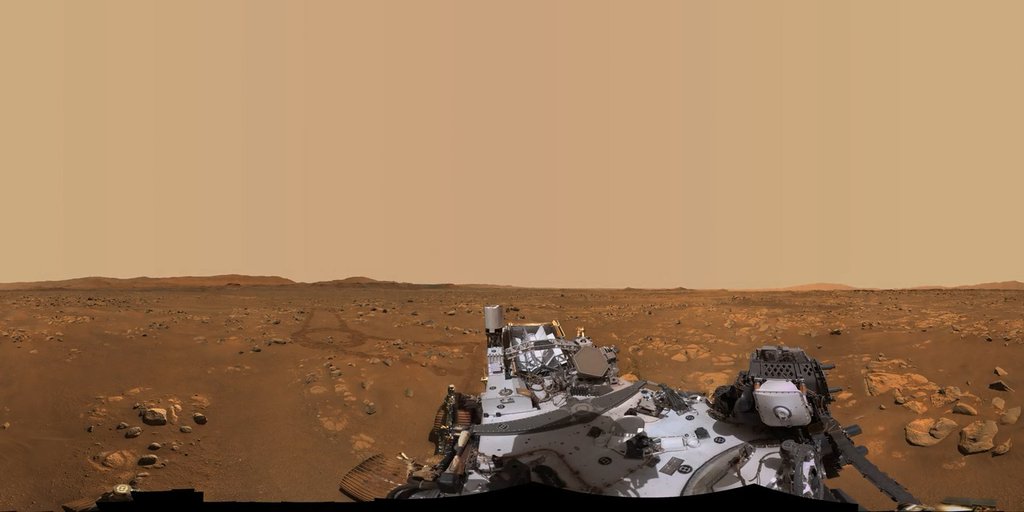 NASA’s Perseverance Mars rover used its Mastcam-Z imaging system to capture this 360-degree panorama of “Van Zyl Overlook,” where the rover was parked as the Ingenuity helicopter performed its first flights.

The six-wheeled scientist is heading south to explore Jezero Crater’s lakebed in search of signs of ancient microbial life.

On June 1, NASA’s Perseverance Mars rover kicked off the science phase of its mission by leaving the “Octavia E. Butler” landing site. Until recently, the rover has been undergoing systems tests, or commissioning, and supporting the Ingenuity Mars Helicopter’s month of flight tests.

During the first few weeks of this first science campaign, the mission team will drive to a low-lying scenic overlook from which the rover can survey some of the oldest geologic features in Jezero Crater, and they’ll bring online the final capabilities of the rover’s auto-navigation and sampling systems.

NASA’s Perseverance Mars rover used its Mastcam-Z imaging system to capture this 360-degree panorama of “Van Zyl Overlook,” where the rover was parked as the Ingenuity helicopter performed its first flights. The 2.4 billion-pixel panorama is made up of 992 individual images stitched together. The images were taken between April 15 and 26, 2021, or the 53rd and 64th Martian days, or sols, of the mission.

By the time Perseverance completed its commissioning phase on June 1, the rover had already tested its oxygen-generating MOXIE instrument and conducted the technology demonstration flights of the Ingenuity helicopter. Its cameras had taken more than 75,000 images, and its microphones had recorded the first audio soundtracks of Mars. 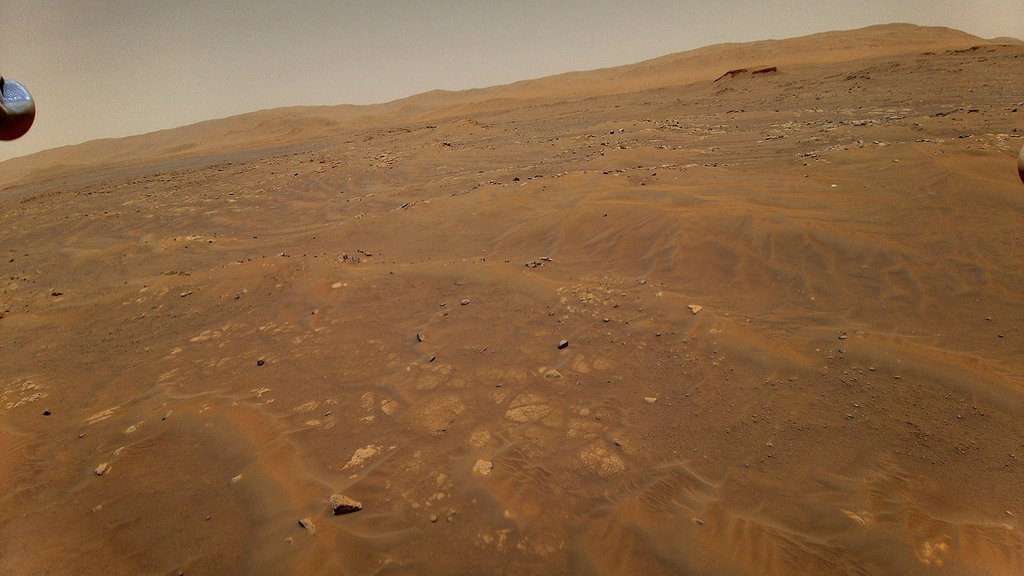 This image looking west toward the Séítah geologic unit on Mars was taken from the height of 33 feet (10 meters) by NASA’s Ingenuity Mars helicopter during its sixth flight, on May 22, 2021.

“We are putting the rover’s commissioning phase as well as the landing site in our rearview mirror and hitting the road,” said Jennifer Trosper, Perseverance project manager at NASA’s Jet Propulsion Laboratory in Southern California. “Over the next several months, Perseverance will be exploring a 1.5-square-mile [4-square-kilometer] patch of crater floor. It is from this location that the first samples from another planet will be collected for return to Earth by a future mission.”

The science goals of the mission are to study the Jezero region in order to understand the geology and past habitability of the environment in the area, and to search for signs of ancient microscopic life. The team will identify and collect the most compelling rock and sediment samples, which a future mission could retrieve and bring back to Earth for more detailed study. Perseverance will also take measurements and test technologies to support future human and robotic exploration of Mars.

Spanning hundreds of sols (or Martian days), this first science campaign will pursue all of the mission’s science goals as the rover explores two unique geologic units in which Jezero’s deepest (and most ancient) layers of exposed bedrock and other intriguing geologic features can be found. The first unit, called “the Crater Floor Fractured Rough,” is the crater-filled floor of Jezero. The adjacent unit, named “Séítah” (meaning “amidst the sand” in the Navajo language), has its fair share of Mars bedrock but is also home to ridges, layered rocks, and sand dunes.

“To do justice to both units in the time allotted, the team came up with the Martian version of an old auto club-style map,” said JPL’s Kevin Hand, an astrobiologist and co-lead, along with Vivian Sun, of this science campaign. “We have our route planned, complete with optional turnoffs and labeled areas of interest and potential obstructions in our path.” 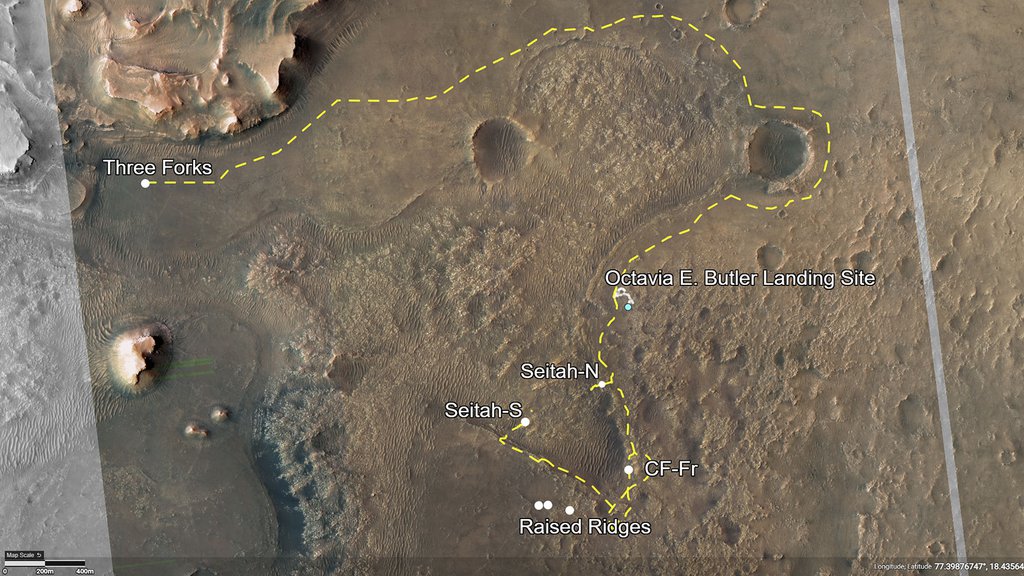 Most of the challenges along the way are expected to come in the form of sand dunes located within the mitten-shaped Séítah unit. To negotiate them, the rover team decided Perseverance will drive mostly either on the Crater Floor Fractured Rough or along the boundary line between it and Séítah. When the occasion calls for it, Perseverance will perform a “toe dip” into the Séítah unit, making a beeline for a specific area of interest.

The goal of the campaign is to establish what four locations in these units best tell the story of Jezero Crater’s early environment and geologic history. When the science team decides a location is just right, they will collect one or two samples.

“Starting with the Crater Floor Fractured Rough and Seitah geologic units allows us to start our exploration of Jezero at the very beginning,” said Hand. “This area was under at least 100 meters [328 feet] of water 3.8 billion years ago. We don’t know what stories the rocks and layered outcrops will tell us, but we’re excited to get started.”

The first science campaign will be complete when the rover returns to its landing site. At that point, Perseverance will have traveled between 1.6 and 3.1 miles (2.5 and 5 kilometers) and up to eight of Perseverance’s 43 sample tubes could be filled with Mars rock and regolith (broken rock and dust). Next, Perseverance will travel north then west toward the location of its second science campaign: Jezero’s delta region. The delta is the fan-shaped remains of the confluence of an ancient river and a lake within Jezero Crater. The location may be especially rich in carbonates – minerals that, on Earth, can preserve fossilized signs of ancient life and can be associated with biological processes.

The start of Perseverance’s first science campaign also marks a transition on the team: On June 7, Jennifer Trosper became the mission’s new project manager. She succeeds Matt Wallace, who is moving on to become JPL’s Deputy Director for Planetary Science.

“From Sojourner to Spirit and Opportunity to Curiosity to Perseverance, Matt has played key roles in the design, construction, and operations of every Mars rover NASA has ever built,” said Trosper. “And while the project is losing a great leader and trusted friend, we know Matt will continue making great things happen for the planetary science community.”