The expanse of Jezero Crater’s river delta is shown in this panorama of 64 stitched-together images taken by the Mastcam-Z system on NASA’s Perseverance Mars rover on April 11, 2022, the 406th Martian day, or sol, of the mission. Credit: NASA/JPL-Caltech/ASU/MSSS Full Image Details

Collecting samples as it explores an ancient and now-dry river channel is but one goal the six-wheeled geologist will pursue during its second Red Planet exploration.

After collecting eight rock-core samples from its first science campaign and completing a record-breaking, 31-Martian-day (or sol) dash across about 3 miles (5 kilometers) of Mars, NASA’s Perseverance rover arrived at the doorstep of Jezero Crater’s ancient river delta April 13. Dubbed “Three Forks” by the Perseverance team (a reference to the spot where three route options to the delta merge), the location serves as the staging area for the rover’s second science expedition, the “Delta Front Campaign.” 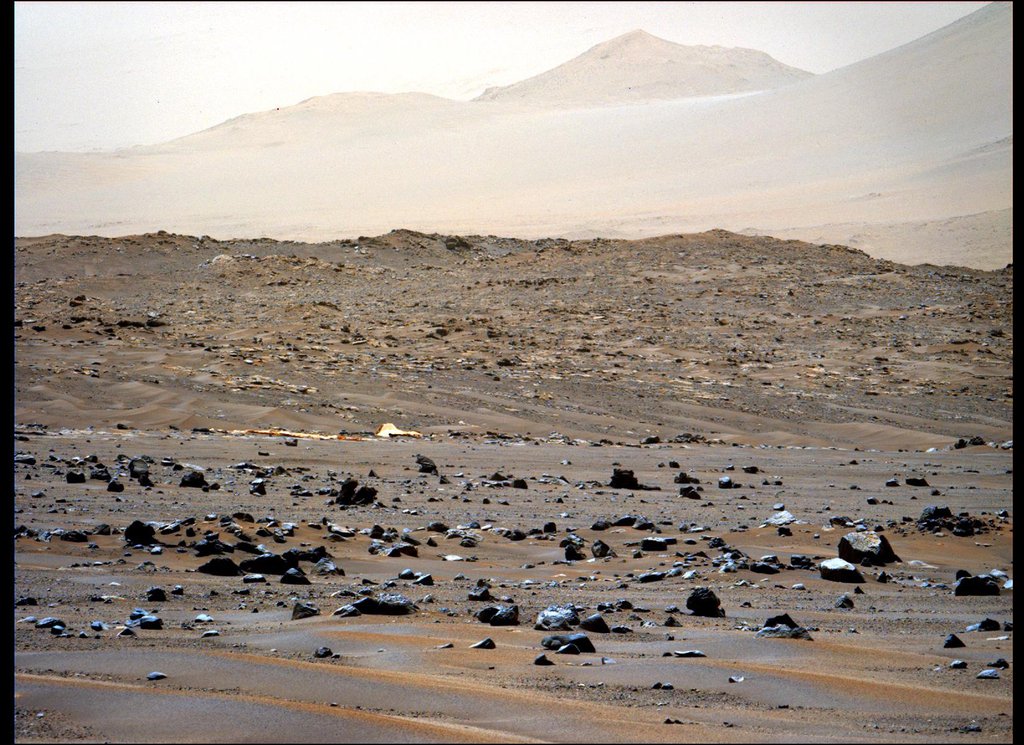 This image of the parachute that helped deliver NASA's Perseverance Mars rover to the Martian surface was taken by the rover's Mastcam-Z instrument on April 6, 2022.
Credit: NASA/JPL-Caltech/ASU/MSSS
Full Image Details

“The delta at Jezero Crater promises to be a veritable geologic feast and one of the best locations on Mars to look for signs of past microscopic life,” said Thomas Zurbuchen, the associate administrator of NASA’s Science Mission Directorate in Washington. “The answers are out there – and Team Perseverance is ready to find them.”

The delta, a massive fan-shaped collection of rocks and sediment at the western edge of Jezero Crater, formed at the convergence of a Martian river and a crater lake billions of years ago. Its exploration tops the Perseverance science team’s wish list because all the fine-grained sediment deposited at its base long ago is the mission’s best bet for finding the preserved remnants of ancient microbial life.

Using a drill on the end of its robotic arm and a complex sample collection system, Perseverance is gathering rock cores for return to Earth – the first part of the Mars Sample Return campaign.

Video taken by NASA’s Perseverance Mars rover shows some of the terrain the rover had to negotiate during its drive to the delta at Jezero Crater in April 2022. Credit: NASA/JPL-Caltech Full Image Details

“We’ve been eyeing the delta from a distance for more than a year while we explored the crater floor,” said Ken Farley, Perseverance project scientist at Caltech in Pasadena. “At the end of our fast traverse, we are finally able to get close to it, obtaining images of ever-greater detail revealing where we can best explore these important rocks.”

Sticking a Fork in Three Forks

The Delta Front Campaign kicked off Monday, April 18, with about a week’s worth of driving to the southwest and then west. One goal of this excursion is to scope out the best route to ascend the delta, which rises about 130 feet (40 meters) above the crater floor. Two options, called “Cape Nukshak” and “Hawksbill Gap,” look traversable. The science team is leaning toward Hawksbill Gap because of the shorter drive time needed to reach the top of the delta, but that may change as the rover acquires additional information on the two options.

Whichever route Perseverance takes to the plateau atop the delta, the team will perform detailed science investigations, including taking rock core samples, on the way up, then turn around and do the same thing on the way back down. The rover is expected to collect around eight samples over about half an Earth year during the Delta Front Campaign.

After completing the descent, Perseverance will, according to current plans, again ascend the delta (perhaps via the other, untraveled route) to begin the “Delta Top Campaign,” which will last about half an Earth year as well.

“The delta is why Perseverance was sent to Jezero Crater: It has so many interesting features,” said Farley. “We will look for signs of ancient life in the rocks at the base of the delta, rocks that we think were once mud on the bottom of ‘Lake Jezero.’ Higher up the delta, we can look at sand and rock fragments that came from upstream, perhaps from miles away. These are locations the rover will never visit. We can take advantage of an ancient Martian river that brought the planet’s geological secrets to us.”

Perseverance is kicking off its second science campaign more than a month earlier than planned due to the rover’s ability to autonomously negotiate Jezero Crater’s sandpits, craters, boulders, and fields of sharp rocks. The rover’s six flight-grade-aluminum wheels completed 3,116.25 revolutions during the 16,617-foot (5,065-meter) journey to Three Forks. Averaging 692 feet (211 meters) per drive (no driving occurred on six sols), the rover’s artificial-intelligence-assisted autonavigation capability, or AutoNav, assessed 10,744 navigation camera images during the road trip and commanded the rover to halt and turn in place to negotiate surface hazards 55 times.