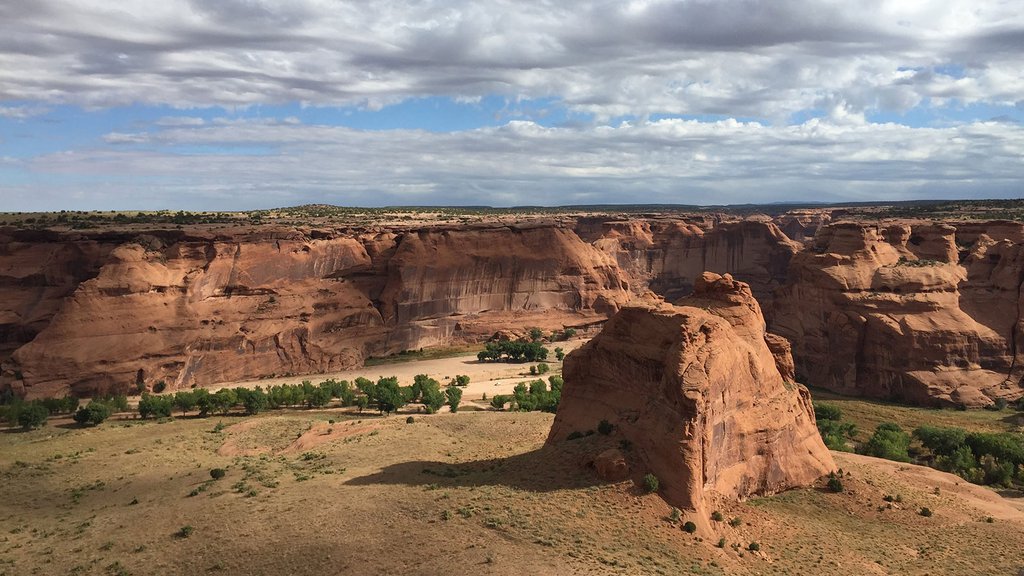 Canyon de Chelly National Monument (“Tséyi’” in Navajo) in Arizona is located on Navajo Nation land. Members of NASA’s Perseverance rover team, in collaboration with the Navajo Nation, has been naming features of scientific interest with words in the Navajo language. Larger view 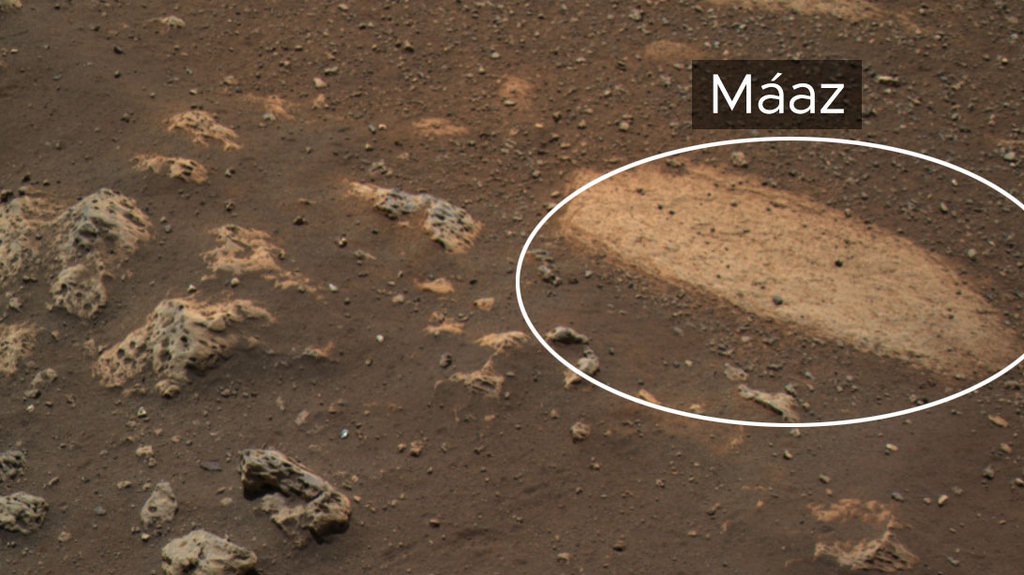 This rock, called “Máaz” (the Navajo word for “Mars”), is the first feature of scientific interest to be studied by NASA’s Perseverance Mars rover. Larger view

Working with the Navajo Nation, the rover team has named features on Mars with words from the Navajo language.

The first scientific focus of NASA’s Perseverance rover is a rock named “Máaz” – the Navajo word for “Mars.” The rover’s team, in collaboration with the Navajo Nation Office of the President and Vice President, has been naming features of scientific interest with words in the Navajo language.

Surface missions assign nicknames to landmarks to provide the mission’s team members, which number in the thousands, a common way to refer to rocks, soils, and other geologic features of interest. Previous rover teams have named features after regions of geologic interest on Earth as well as people and places related to expeditions. Although the International Astronomical Union designates official names for planetary features, these informal names are used as reference points by the team.

Before launch, Perseverance’s team divided the Jezero Crater landing site into a grid of quadrangles, or “quads,” that are roughly 1 square mile (2.6 square kilometers) in size. The team decided to name these quads after national parks and preserves on Earth with similar geology. Perseverance touched down in the quad named for Arizona’s Canyon de Chelly National Monument (Tséyi’ in Navajo), in the heart of the Navajo Nation. The team’s plan was to compile a list of names inspired by each quad’s national park that could be used to name features observed by Perseverance. Mission scientists worked with a Navajo (or Diné) engineer on the team, Aaron Yazzie of NASA’s Jet Propulsion Laboratory in Southern California, to seek the Navajo Nation’s permission and collaboration in naming new features on Mars.

Navajo Nation President Jonathan Nez, Vice President Myron Lizer, and their advisors made a list of words in the Navajo language available to the rover’s team. Some terms were inspired by the terrain imaged by Perseverance at its landing site. For example, one suggestion was “tséwózí bee hazhmeezh,” or “rolling rows of pebbles, like waves.” Yazzie added suggestions like “strength” (“bidziil”) and “respect” (“hoł nilį́”) to the list. Perseverance itself was translated to “Ha’ahóni.”

“The partnership that the Nez-Lizer Administration has built with NASA will help to revitalize our Navajo language,” said Navajo Nation President Jonathan Nez. “We hope that having our language used in the Perseverance mission will inspire more of our young Navajo people to understand the importance and the significance of learning our language. Our words were used to help win World War II, and now we are helping to navigate and learn more about the planet Mars.”

The Perseverance team has a list of 50 names to start with. The team will work with the Navajo Nation on more names in the future as the rover continues to explore.

“This fateful landing on Mars has created a special opportunity to inspire Navajo youth not just through amazing scientific and engineering feats, but also through the inclusion of our language in such a meaningful way,” Yazzie said.

However, for Perseverance to recognize landmarks that have been labeled in Navajo, it has to be “taught” the language. The accent marks used in the English alphabet to convey the unique intonation of the Navajo language cannot be read by the computer languages Perseverance uses. Yazzie noted that while they work hard to come up with translations that best resemble Navajo spellings, the team will use English letters without special characters or punctuation to represent Navajo words.

“We are very proud of one of our very own, Aaron Yazzie, who is playing a vital role in NASA’s Mars 2020 Perseverance Mission,” President Nez said. “We are excited for the NASA team and for Aaron and we see him as being a great role model who will inspire more interest in the STEM fields of study and hopefully inspire more of our young people to pursue STEM careers to make even greater impacts and contributions just as Aaron is doing. As the mission continues, we offer our prayers for continued success.”

Scientists on the team have embraced the opportunity to learn Navajo words and their meaning, said Perseverance Deputy Project Scientist Katie Stack Morgan of JPL. “This partnership is encouraging the rover’s science team to be more thoughtful about the names being considered for features on Mars – what they mean both geologically and to people on Earth,” Stack Morgan said.