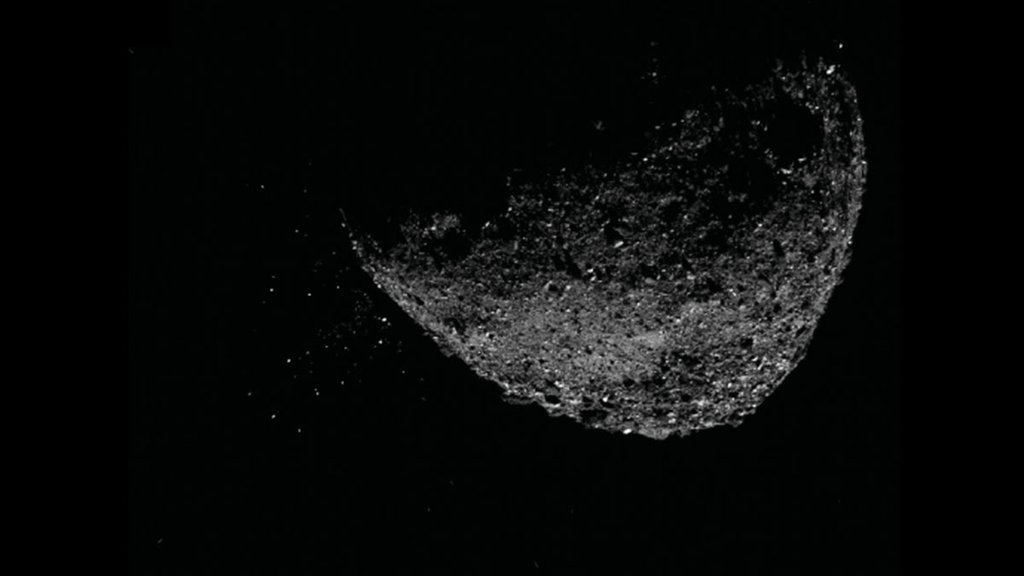 This view of asteroid Bennu ejecting particles from its surface on Jan. 6, 2019, was created by combining two images taken by the NavCam 1 imager aboard NASA's OSIRIS-REx spacecraft: a short exposure image, which shows the asteroid clearly, and a long-exposure image (five seconds), which shows the particles clearly. Other image-processing techniques were also applied, such as cropping and adjusting the brightness and contrast of each layer.
Credit: NASA/Goddard/University of Arizona/Lockheed Martin

The spacecraft discovered that asteroid Bennu could be active, consistently discharging particles into space.

Shortly after NASA's OSIRIS-REx spacecraft arrived at asteroid Bennu, an unexpected discovery by the mission's science team revealed that the asteroid could be active, or consistently discharging particles into space. The ongoing examination of Bennu - and its sample that will eventually be returned to Earth - could potentially shed light on why this intriguing phenomenon is occurring.

The OSIRIS-REx team first observed a particle-ejection event in images captured by the spacecraft's navigation cameras taken on Jan. 6, just a week after the spacecraft entered its first orbit around Bennu. At first glance, the particles appeared to be stars behind the asteroid, but on closer examination, the team realized that the asteroid was ejecting material from its surface. After concluding that these particles did not compromise the spacecraft's safety, the mission began dedicated observations in order to fully document the activity.

This animation illustrates the modeled trajectories of particles that were ejected from Bennu's surface on January 19. After ejecting from the asteroid's surface, the particles either briefly orbited Bennu and fell back to its surface or escaped away from Bennu and into space.

"Among Bennu's many surprises, the particle ejections sparked our curiosity, and we've spent the last several months investigating this mystery," said Dante Lauretta, OSIRIS-REx principal investigator at the University of Arizona in Tucson. "This is a great opportunity to expand our knowledge of how asteroids behave."

After studying the results of the observations, the mission team released their findings in a Science paper published Dec. 6. The team observed the three largest particle-ejection events on Jan. 6 and 19, and Feb. 11, and concluded that the events originated from different locations on Bennu's surface. The first event originated in the southern hemisphere, and the second and third events occurred near the equator. All three events took place in the late afternoon on Bennu.

The team found that, after ejection from the asteroid's surface, the particles either briefly orbited Bennu and fell back to its surface or escaped from Bennu into space. The observed particles traveled up to 10 feet (3 meters) per second, and measured from smaller than an inch up to 4 inches (10 centimeters) in size. Approximately 200 particles were observed during the largest event, which took place on Jan. 6.

The team investigated a wide variety of possible mechanisms that may have caused the ejection events and narrowed the list to three candidates: meteoroid impacts, thermal stress fracturing and released water vapor.

Meteoroid impacts are common in the deep space neighborhood of Bennu, and it is possible that these small fragments of space rock could be hitting Bennu where OSIRIS-REx is not observing it, shaking loose particles with the momentum of their impact.

The team also determined that thermal fracturing is another reasonable explanation. Bennu's surface temperatures vary drastically over its 4.3-hour rotation period. Although it is extremely cold during the night hours, the asteroid's surface warms significantly in the mid-afternoon, which is when the three major events occurred. As a result of this temperature change, rocks may begin to crack and break down, and eventually particles could be ejected from the surface. This cycle is known as thermal stress fracturing.

Water release may also explain the asteroid's activity. When Bennu's water-locked clays are heated, the water could begin to release and create pressure. It is possible that as pressure builds in cracks and pores in boulders where absorbed water is released, the surface could become agitated, causing particles to erupt.

But nature does not always allow for simple explanations. "It could be that more than one of these possible mechanisms are at play," said Steve Chesley, an author on the paper and Senior Research Scientist at NASA's Jet Propulsion Laboratory in Pasadena, California. "For example, thermal fracturing could be chopping the surface material into small pieces, making it far easier for meteoroid impacts to launch pebbles into space."

Bennu's activity presents larger opportunities once a sample is collected and returned to Earth for study. Many of the ejected particles are small enough to be collected by the spacecraft's sampling mechanism, meaning that the returned sample may possibly contain some material that was ejected and returned to Bennu's surface. Determining that a particular particle had been ejected and returned to Bennu might be a scientific feat similar to finding a needle in a haystack. The material returned to Earth from Bennu, however, will almost certainly increase our understanding of asteroids and the ways they are both different and similar, even as the particle-ejection phenomenon continues to be a mystery whose clues we'll also return home with in the form of data and further material for study.

Sample collection is scheduled for summer 2020, and the sample will be delivered to Earth in September 2023.

NASA's Goddard Space Flight Center in Greenbelt, Maryland provides overall mission management, systems engineering, and the safety and mission assurance for OSIRIS-REx. Dante Lauretta of the University of Arizona in Tucson, is the principal investigator, and the University of Arizona also leads the science team and the mission's science observation planning and data processing. Lockheed Martin Space in Denver built the spacecraft and is providing flight operations. Goddard and KinetX Aerospace are responsible for navigating the OSIRIS-REx spacecraft. OSIRIS-REx is the third mission in NASA's New Frontiers Program, which is managed by NASA's Marshall Space Flight Center in Huntsville, Alabama, for the agency's Science Mission Directorate in Washington.