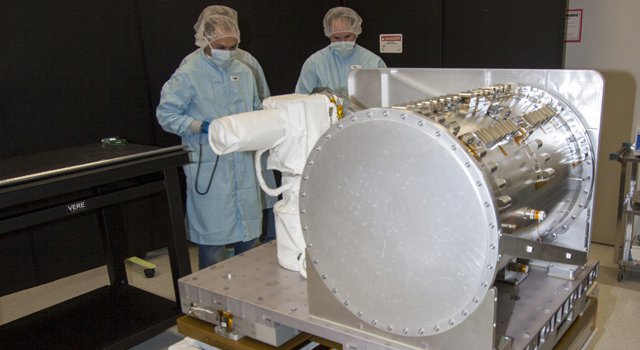 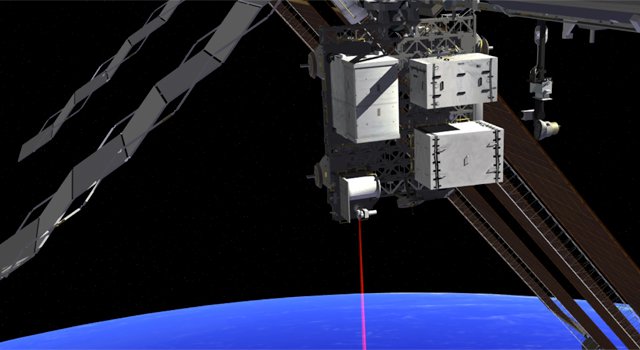 This artist's concept shows how the Optical Payload for Lasercomm Science (OPALS) laser will beam data to Earth from the International Space Station.
Credit: NASA.

NASA will use the International Space Station to test new technology that could improve spacecraft communications and strengthen transmission of scientific data.

PASADENA, Calif. -- NASA will use the International Space Station to test a new communications technology that could dramatically improve spacecraft communications, enhance commercial missions and strengthen transmission of scientific data.

The Optical Payload for Lasercomm Science (OPALS), an optical technology demonstration experiment, could improve NASA's data rates for communications with future spacecraft by a factor of 10 to 100. OPALS has arrived at NASA's Kennedy Space Center in Florida from the agency's Jet Propulsion Laboratory in Pasadena, Calif. It is scheduled to launch to the space station later this year aboard a SpaceX Dragon commercial resupply capsule on the company's Falcon 9 rocket.

"OPALS represents a tangible stepping stone for laser communications, and the International Space Station is a great platform for an experiment like this," said Michael Kokorowski, OPALS project manager at JPL. "Future operational laser communication systems will have the ability to transmit more data from spacecraft down to the ground than they currently do, mitigating a significant bottleneck for scientific investigations and commercial ventures."

OPALS will be mounted on the outside of the International Space Station and communicate with a ground station in Wrightwood, Calif., a mountain town near Los Angeles.

"It's like aiming a laser pointer continuously for two minutes at a dot the diameter of a human hair from 30 feet away while you're walking," explained OPALS systems engineer Bogdan Oaida of JPL.

The OPALS instrument was built at JPL and is slated to fly on the Dragon capsule in late 2013. The mission is expected to run 90 days after installation on the station.

The OPALS Project Office is based at JPL, a division of the California Institute of Technology in Pasadena.

For more information about the International Space Station, visit: http://www.nasa.gov/station .