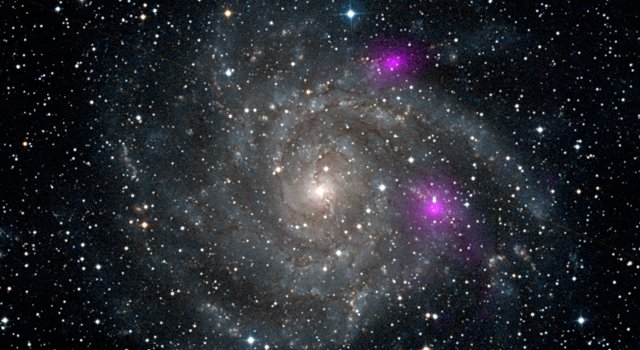 This new view of spiral galaxy IC 342, also known as Caldwell 5, includes data from NASA's Nuclear Spectroscopic Telescope Array, or NuSTAR. High-energy X-ray data from NuSTAR have been translated to the color magenta, and superimposed on a visible-light view highlighting the galaxy and its star-studded arms. NuSTAR is the first orbiting telescope to take focused pictures of the cosmos in high-energy X-ray light; previous observations of this same galaxy taken at similar wavelengths blurred the entire object into one pixel.› Full image and caption
Credit: NASA/JPL-Caltech/DSS 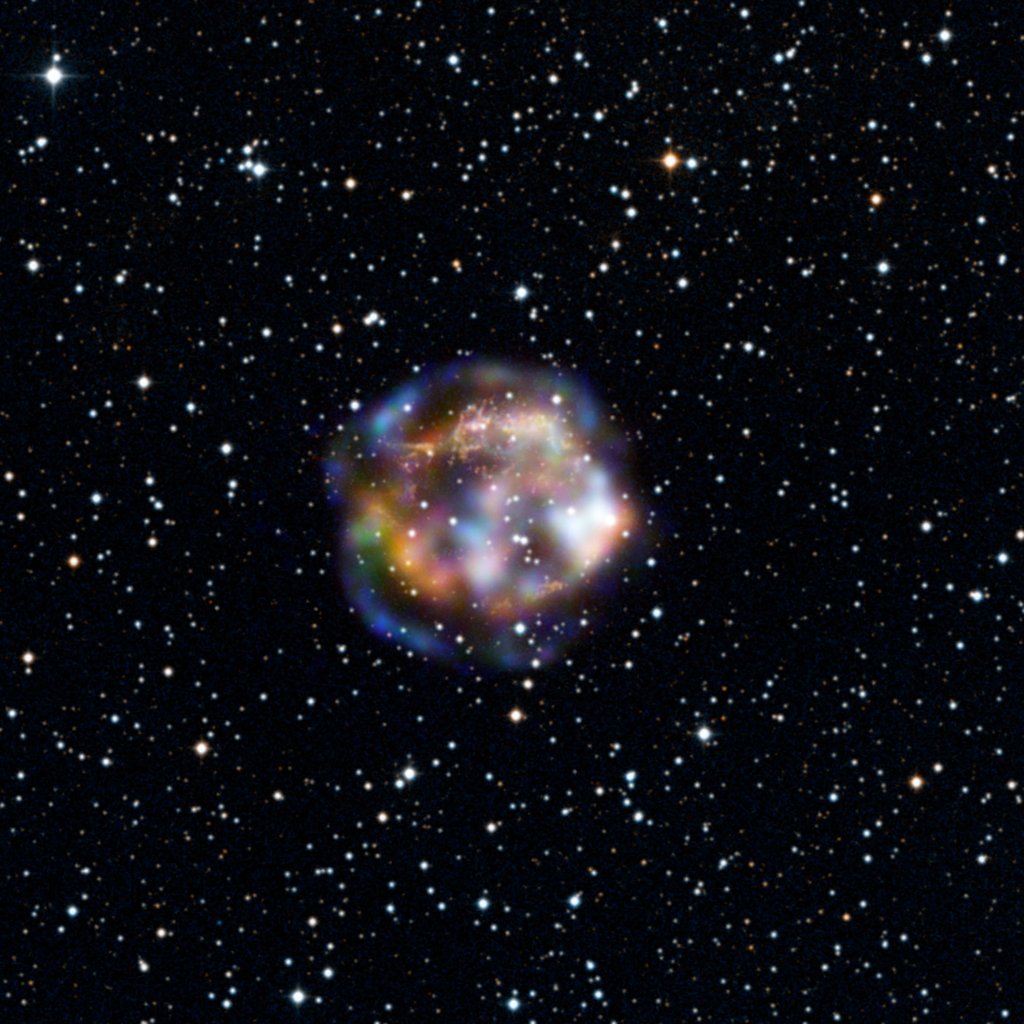 This new view of the historical supernova remnant Cassiopeia A, located 11,000 light-years away, was taken by NASA's Nuclear Spectroscopic Telescope Array, or NuSTAR. Blue indicates the highest energy X-ray light, where NuSTAR has made the first resolved image ever of this source. Red and green show the lower end of NuSTAR's energy range, which overlaps with NASA's high-resolution Chandra X-ray Observatory.› Full image and caption
Credit: NASA/JPL-Caltech/DSS

NASA's Nuclear Spectroscopic Telescope Array, or NuSTAR, set its X-ray eyes on a spiral galaxy and caught the brilliant glow of two black holes lurking inside.

The new image is being released Monday along with NuSTAR's view of the supernova remnant Cassiopeia A, at the American Astronomical Society meeting in Long Beach, Calif.

"These new images showcase why NuSTAR is giving us an unprecedented look at the cosmos," said Lou Kaluzienski, NuSTAR program scientist at NASA headquarters in Washington. "With NuSTAR's greater sensitivity and imaging capability, we're getting a wealth of new information on a wide array of cosmic phenomena in the high-energy X-ray portion of the electromagnetic spectrum."

Launched last June, NuSTAR is the first orbiting telescope with the ability to focus high-energy X-ray light. It can view objects in considerably greater detail than previous missions operating at similar wavelengths. Since launch, the NuSTAR team has been fine-tuning the telescope, which includes a mast the length of a school bus connecting the mirrors and detectors.

The mission has looked at a range of extreme, high-energy objects already, including black holes near and far, and the incredibly dense cores of dead stars. In addition, NuSTAR has begun black hole searches in the inner region of the Milky Way galaxy and in distant galaxies in the universe.

Among the telescope's targets is the spiral galaxy IC342, also known as Caldwell 5, featured in one of the two new images. This galaxy lies 7 million light-years away in the constellation Camelopardalis (the Giraffe). Previous X-ray observations of the galaxy from NASA's Chandra X-ray Observatory revealed the presence of two blinding black holes, called ultraluminous X-ray sources (ULXs).

"High-energy X-rays hold a key to unlocking the mystery surrounding these objects," said Fiona Harrison, NuSTAR principal investigator at the California Institute of Technology in Pasadena. "Whether they are massive black holes, or there is new physics in how they feed, the answer is going to be fascinating."

In the image, the two bright spots that appear entangled in the arms of the IC342 galaxy are the black holes. High-energy X-ray light has been translated into the color magenta, while the galaxy itself is shown in visible light.

"Before NuSTAR, high-energy X-ray pictures of this galaxy and the two black holes would be so fuzzy that everything would appear as one pixel," said Harrison.

The second image features the well-known, historical supernova remnant Cassiopeia A, located 11,000 light-years away in the constellation Cassiopeia. The color blue indicates the highest-energy X-ray light seen by NuSTAR, while red and green signify the lower end of NuSTAR's energy range. The blue region is where the shock wave from the supernova blast is slamming into material surrounding it, accelerating particles to nearly the speed of light. As the particles speed up, they give off a type of light known as synchrotron radiation. NuSTAR will be able to determine for the first time how energetic the particles are, and address the mystery of what causes them to reach such great speeds.

"Cas A is the poster child for studying how massive stars explode and also provides us a clue to the origin of the high-energy particles, or cosmic rays, that we see here on Earth," said Brian Grefenstette of Caltech, a lead researcher on the observations. "With NuSTAR, we can study where, as well as how, particles are accelerated to such ultra-relativistic energies in the remnant left behind by the supernova explosion."

For more information about NuSTAR and to view the new images, visit: http://www.nasa.gov/nustar .