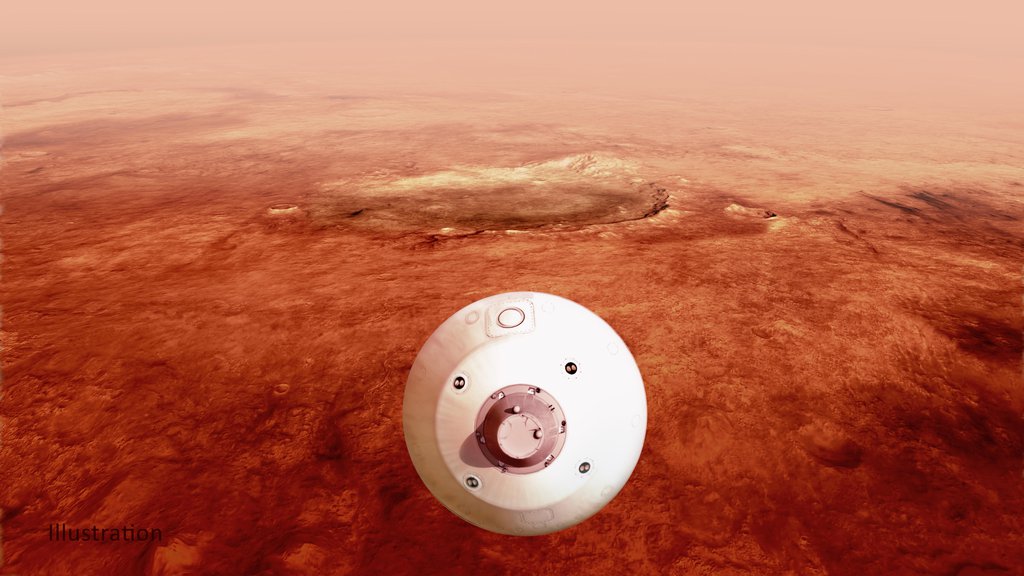 The aeroshell containing NASA’s Perseverance rover guides itself toward the Martian surface as it descends through the atmosphere in this illustration. Hundreds of critical events must execute perfectly and exactly on time for the rover to land on Mars safely on Feb. 18, 2021. Full Image Details

With about 2.4 million miles (3.9 million kilometers) left to travel in space, NASA’s Mars 2020 Perseverance mission is days away from attempting to land the agency’s fifth rover on the Red Planet. Engineers at NASA’s Jet Propulsion Laboratory in Southern California, where the mission is managed, have confirmed that the spacecraft is healthy and on target to touch down in Jezero Crater at around 3:55 p.m. EST (12:55 p.m. PST) on Feb. 18, 2021.

“Perseverance is NASA’s most ambitious Mars rover mission yet, focused scientifically on finding out whether there was ever any life on Mars in the past,” said Thomas Zurbuchen, associate administrator for the Science Mission Directorate at NASA Headquarters in Washington. “To answer this question, the landing team will have its hands full getting us to Jezero Crater – the most challenging Martian terrain ever targeted for a landing.”

Jezero is a basin where scientists believe an ancient river flowed into a lake and deposited sediments in a fan shape known as a delta. Scientists think the environment here was likely to have preserved signs of any life that gained a foothold billions of years ago – but Jezero also has steep cliffs, sand dunes, and boulder fields. Landing on Mars is difficult – only about 50% of all previous Mars landing attempts have succeeded – and these geological features make it even more so. The Perseverance team is building on lessons from previous touchdowns and employing new technologies that enable the spacecraft to target its landing site more accurately and avoid hazards autonomously.

“The Perseverance team is putting the final touches on the complex choreography required to land in Jezero Crater,” said Jennifer Trosper, deputy project manager for the mission at JPL. “No Mars landing is guaranteed, but we have been preparing a decade to put this rover’s wheels down on the surface of Mars and get to work.”

All landings on Mars are difficult, but NASA's Perseverance rover is attempting to touch down in the most challenging terrain on Mars ever targeted.

You will get to watch the drama of Perseverance’s entry, descent, and landing (EDL) – the riskiest portion of the rover’s mission that some engineers call the “seven minutes of terror” – live on NASA TV. Commentary starts at 2:15 p.m. EST (11:15 a.m. PST) on Feb. 18. Engineers expect to receive notice of key milestones for landing at the estimated times below. (Because of the distance the signals have to travel from Mars to Earth, these events actually take place on Mars 11 minutes, 22 seconds earlier than what is noted here.)

A variety of factors can affect the precise timing of the milestones listed above, including properties of the Martian atmosphere that are hard to predict until the spacecraft actually flies through.

Mission controllers also may not be able to confirm these milestones at the times listed above because of the complexity of deep-space communications. The flow of detailed engineering data (called telemetry) in near-real-time relies on a new kind of relay capability added this past year to NASA’s Mars Reconnaissance Orbiter (MRO). Engineers expect additional data to return to Earth directly through NASA’s Deep Space Network and two other Earth-based antennas until shortly before touchdown.

It’s important to note that the rover can land safely on Mars without communications with Earth: Perseverance has pre-programmed landing instructions and significant autonomy. Additional communication passes are planned in the hours and days following the landing event.

Once on the surface, one of Perseverance’s first activities will be to take pictures of its new home and transmit them back to Earth. Over the following days, engineers will also check on the health of the rover and deploy the remote sensing mast (otherwise known as its “head”) so it can take more pictures. The Perseverance team will then take more than a month to thoroughly inspect the rover and load new flight software to prepare for its search for ancient life on Mars. During the same period, the Ingenuity Mars Helicopter team will be making sure their small but mighty robot is prepared for the first attempt at controlled, powered aerodynamic flight on another planet.

“The Ingenuity team will be on the edge of our seats with the Perseverance team on landing day,” said MiMi Aung, the Ingenuity project manager at JPL. “We can’t wait until the rover and the helicopter are both safely on the surface of Mars and ready for action.”

More About the Perseverance Mission

A key objective of Perseverance’s mission on Mars is astrobiology, including the search for signs of ancient microbial life. The rover will characterize the planet’s geology and past climate, pave the way for human exploration of the Red Planet, and will be the first mission to collect and cache Martian rock and sediment for later return to Earth.

The press kit for Perseverance’s landing can be found at:

A press kit for Ingenuity can be found at: