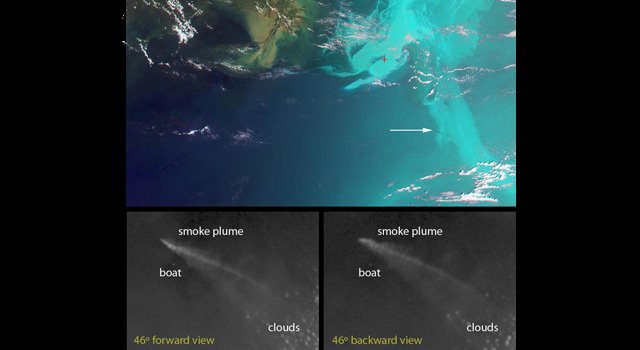 Top: False-color image of the Gulf of Mexico oil spill, created by combining data from different color bands on two of MISR's nine cameras. Bottom: Two MISR camera views of a smoke plume believed to be from a controlled burn of oil on the ocean surface.› Full image and caption
Credit: NASA/GSFC/LaRC/JPL, MISR Team

These unique images of the Deepwater Horizon oil slick in the Gulf of Mexico were obtained by the Multi-angle Imaging SpectroRadiometer (MISR) instrument aboard NASA's Terra spacecraft on May 17, 2010, at around 16:40 UTC (11:40 a.m. CDT). The top panel is a false-color image created by combining data from the red band of the 26-degree forward-viewing camera (where the oil appears dark) with the blue and green bands of the nadir (vertical-viewing) camera (where the oil appears bright). The result causes the oil spill to stand out dramatically in shades of cyan, while other features like clouds and land appear close to their natural color. The Mississippi River Delta is visible in the upper left portion of the image. The red symbol represents the former location of the Deepwater Horizon drilling platform. The image dimensions are 346 by 258 kilometers (215 by 160 miles), and north is toward the top of the image.

The white arrow in the right-center of the image points to a plume of smoke, most likely from a controlled burn of oil collected on the surface. Controlled burns of oil began in early May to attempt to remove oil from the open water. The plume appears as a dark streak against the brighter reflection of sunlight off the ocean surface. The lower two panels are enlarged images of the area around the smoke plume acquired by MISR's 46-degree forward-viewing and 46-degree backward-viewing cameras. At these viewing angles and under the viewing conditions on this date, the smoke particles appear bright and sunglint from the ocean surface is much weaker. The views at the two different angles cover the same physical area of 42 by 30 kilometers (26 by 19 miles). The clouds in the lower right quadrant of these panels appear to shift in position, due to the different camera view angles. However, a bright point to the south of the plume does not show such a shift, and is likely a boat observing the controlled burn. The apparent shift in position of the smoke plume itself places its altitude at about 560 meters (1,840 feet) above the surface.