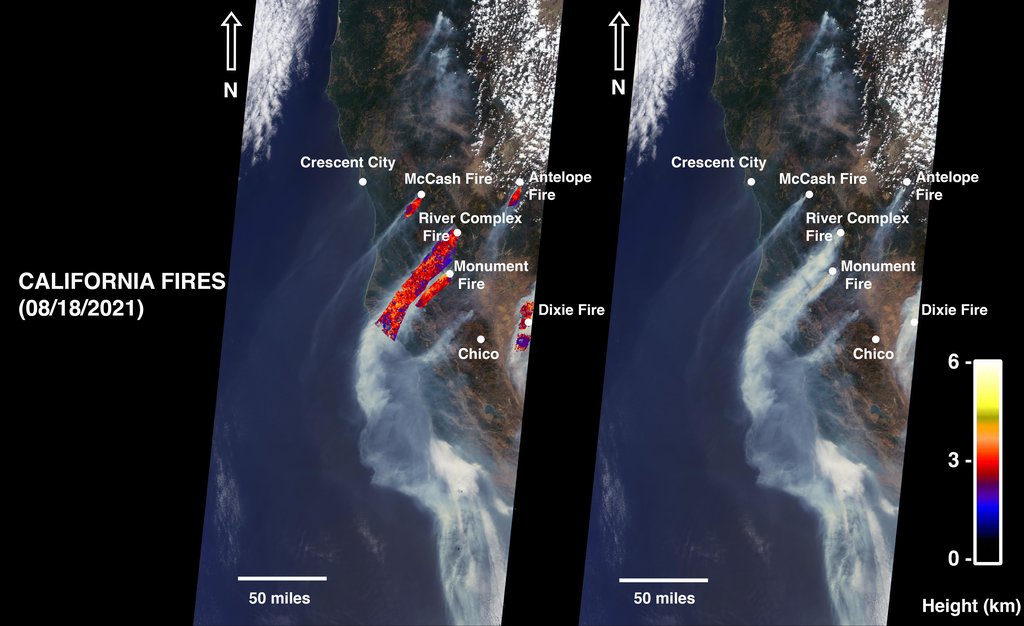 Smoke from several large wildfires burning in Northern California can be seen traveling miles into the atmosphere.

As of Aug. 24, wildfires in Northern California – including the McCash, Antelope, River Complex, Monument, and Dixie fires – have scorched more than 1 million acres of land. The Dixie Fire, the state’s second largest in history, accounts for 731,310 acres. On Aug. 18, NASA’s Multi-angle Imaging SpectroRadiometer (MISR) instrument, aboard the Terra satellite, acquired new data showing smoke from these fires.

The MISR instrument has nine cameras that view Earth at different angles. The right side of the image shows smoke from the five fires as observed by MISR’s nadir (downward-pointing) camera. The multi-angular information from MISR’s images is used to calculate the height of the smoke plumes. The results of those calculations are shown in the left side of the image. Smoke from areas in red reached an altitude of around 9,840 feet (3,000 meters). The highest plume near the active fires reached approximately 19,685 feet (6,000 meters). In general, higher-altitude plumes transport smoke greater distances from the source, impacting communities downwind. In recent weeks, smoke from fires in the Western U.S. and Canada has impacted much of the East Coast.

MISR was built and is managed by NASA’s Jet Propulsion Laboratory, Southern California, for NASA’s Science Mission Directorate in Washington. The Terra spacecraft is managed by NASA’s Goddard Space Flight Center in Greenbelt, Maryland. The MISR data were obtained from the NASA Langley Research Center Atmospheric Science Data Center in Hampton, Virginia. JPL is a division of Caltech in Pasadena.