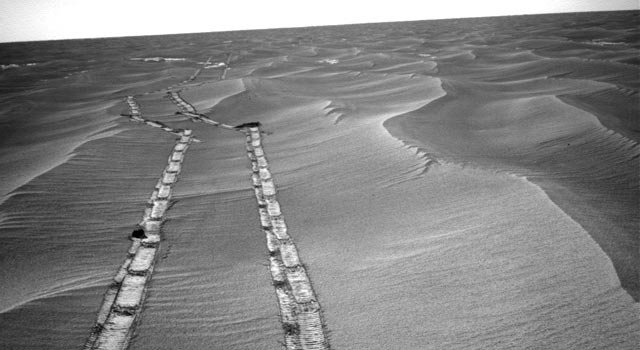 NASA's Mars Exploration Rover Opportunity used its navigation camera for this northward view of tracks the rover left on a drive from one energy-favorable position on the northern end of a sand ripple to another.› Larger image
Credit: NASA/JPL-Caltech

PASADENA, Calif. -- NASA's Mars Exploration Rover Project will pass a historic Martian longevity record on Thursday, May 20. The Opportunity rover will surpass the duration record set by NASA's Viking 1 Lander of six years and 116 days operating on the surface of Mars. The effects of favorable weather on the red planet could also help the rovers generate more power.

Opportunity's twin rover, Spirit, began working on Mars three weeks before Opportunity. However, Spirit has been out of communication since March 22. If it awakens from hibernation and resumes communication, that rover will attain the Martian surface longevity record.

Spirit's hibernation was anticipated, based on energy forecasts, as the amount of sunshine hitting the robot's solar panels declined during autumn on Mars' southern hemisphere. Unfortunately, mobility problems prevented rover operators from positioning Spirit with a favorable tilt toward the north, as during the first three winters it experienced. The rovers' fourth winter solstice, the day of the Martian year with the least sunshine at their locations, was Wednesday, May 12 (May 13 Universal time).

"Opportunity, and likely Spirit, surpassing the Viking Lander 1 longevity record is truly remarkable, considering these rovers were designed for only a 90-day mission on the surface of Mars," Callas said. "Passing the solstice means we're over the hump for the cold, dark, winter season."

Unless dust interferes, which is unlikely in the coming months, the solar panels on both rovers should gradually generate more electricity. Operators hope that Spirit will recharge its batteries enough to awaken from hibernation, start communicating and resume science tasks.

Unlike recent operations, Opportunity will not have to rest to regain energy between driving days. The gradual increase in available sunshine will eventually improve the rate of Opportunity's progress across a vast plain toward its long-term destination, the Endeavour Crater.

This month, some of Opportunity's drives have been planned to end at an energy-favorable tilt on the northern face of small Martian plain surface ripples. The positioning sacrifices some distance to regain energy sooner for the next drive. Opportunity's cameras can see a portion of the rim of Endeavour on the horizon, approximately eight miles away, across the plain's ripples of windblown sand.

"The ripples look like waves on the ocean, like we're out in the middle of the ocean with land on the horizon, our destination," said Steve Squyres of Cornell University in Ithaca, N.Y. Squyres is the principal investigator for Opportunity and Spirit. "Even though we know we might never get there, Endeavour is the goal that drives our exploration."

The team chose Endeavour as a destination in mid-2008, after Opportunity finished two years examining the smaller Victoria Crater. Since then, the goal became even more alluring when orbital observations found clay minerals exposed at Endeavour. Clay minerals have been found extensively on Mars from orbit, but have not been examined on the surface.

"Those minerals form under wet conditions more neutral than the wet, acidic environment that formed the sulfates we've found with Opportunity," said Squyres. "The clay minerals at Endeavour speak to a time when the chemistry was much friendlier to life than the environments that formed the minerals Opportunity has seen so far. We want to get there to learn their context. Was there flowing water? Were there steam vents? Hot springs? We want to find out."

Launched in 1975, Project Viking consisted of two orbiters, each carrying a stationary lander. Viking Lander 1 was the first successful mission to the surface of Mars, touching down on July 20, 1976. It operated until Nov. 13, 1982, more than two years longer than its twin lander or either of the Viking orbiters.

The record for longest working lifetime by a spacecraft at Mars belongs to a later orbiter: NASA's Mars Global Surveyor operated for more than 9 years after arriving in 1997.  NASA's Mars Odyssey, in orbit since in 2001, has been working at Mars longer than any other current mission and is on track to take the Mars longevity record late this year.

Science discoveries by the Mars Exploration Rover have included Opportunity finding the first mineralogical evidence that Mars had liquid water, and Spirit finding evidence for hot springs or steam vents and a past environment of explosive volcanism.

JPL manages the Mars rovers for NASA's Science Mission Directorate in Washington. For more information about the rovers, visit http://www.nasa.gov/rovers . The California Institute of Technology in Pasadena manages JPL for NASA.