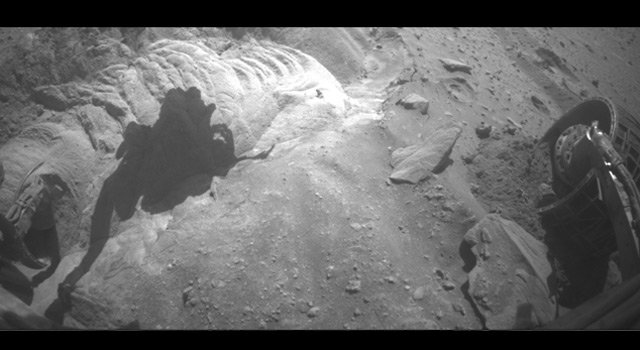 This view from the front hazard-avoidance camera on NASA's Mars Exploration Rover Spirit shows the position of Spirit's front wheels following a backward drive during the 2,154th Martian day, or sol, of the rover's mission on Mars (Jan. 23, 2010). The view is toward the north.
Credit: NASA/JPL-Caltech

After six years of unprecedented exploration of the Red Planet, NASA's Mars Exploration Rover Spirit no longer will be a fully mobile robot.

WASHINGTON -- After six years of unprecedented exploration of the Red Planet, NASA's Mars Exploration Rover Spirit no longer will be a fully mobile robot. NASA has designated the once-roving scientific explorer a stationary science platform after efforts during the past several months to free it from a sand trap have been unsuccessful.

The venerable robot's primary task in the next few weeks will be to position itself to combat the severe Martian winter. If Spirit survives, it will continue conducting significant new science from its final location. The rover's mission could continue for several months to years.

"Spirit is not dead; it has just entered another phase of its long life," said Doug McCuistion, director of the Mars Exploration Program at NASA Headquarters in Washington. "We told the world last year that attempts to set the beloved robot free may not be successful. It looks like Spirit's current location on Mars will be its final resting place."

Ten months ago, as Spirit was driving south beside the western edge of a low plateau called Home Plate, its wheels broke through a crusty surface and churned into soft sand hidden underneath.

After Spirit became embedded, the rover team crafted plans for trying to get the six-wheeled vehicle free using its five functioning wheels - the sixth wheel quit working in 2006, limiting Spirit's mobility. The planning included experiments with a test rover in a sandbox at NASA's Jet Propulsion Laboratory in Pasadena, Calif., plus analysis, modeling and reviews. In November, another wheel quit working, making a difficult situation even worse.

Recent drives have yielded the best results since Spirit became embedded. However, the coming winter mandates a change in strategy. It is mid-autumn at the solar-powered robot's home on Mars. Winter will begin in May. Solar energy is declining and expected to become insufficient to power further driving by mid-February. The rover team plans to use those remaining potential drives for improving the rover's tilt. Spirit currently tilts slightly toward the south. The winter sun stays in the northern sky, so decreasing the southward tilt would boost the amount of sunshine on the rover's solar panels.

"We need to lift the rear of the rover, or the left side of the rover, or both," said Ashley Stroupe, a rover driver at JPL. "Lifting the rear wheels out of their ruts by driving backward and slightly uphill will help. If necessary, we can try to lower the front right of the rover by attempting to drop the right-front wheel into a rut or dig it into a hole."

At its current angle, Spirit probably would not have enough power to keep communicating with Earth through the Martian winter. Even a few degrees of improvement in tilt might make enough difference to enable communication every few days.

"Getting through the winter will all come down to temperature and how cold the rover electronics will get," said John Callas, project manager at JPL for Spirit and its twin rover, Opportunity. "Every bit of energy produced by Spirit's solar arrays will go into keeping the rover's critical electronics warm, either by having the electronics on or by turning on essential heaters."

Even in a stationary state, Spirit continues scientific research.

"There's a class of science we can do only with a stationary vehicle that we had put off during the years of driving," said Steve Squyres, a researcher at Cornell University and principal investigator for Spirit and Opportunity. "Degraded mobility does not mean the mission ends abruptly. Instead, it lets us transition to stationary science."

One stationary experiment Spirit has begun studies tiny wobbles in the rotation of Mars to gain insight about the planet's core. This requires months of radio-tracking the motion of a point on the surface of Mars to calculate long-term motion with an accuracy of a few inches.

"If the final scientific feather in Spirit's cap is determining whether the core of Mars is liquid or solid, that would be wonderful -- it's so different from the other knowledge we've gained from Spirit," said Squyres.

Tools on Spirit's robotic arm can study variations in the composition of nearby soil, which has been affected by water. Stationary science also includes watching how wind moves soil particles and monitoring the Martian atmosphere.

Spirit and Opportunity landed on Mars in January 2004. They have been exploring for six years, far surpassing their original 90-day mission. Opportunity currently is driving toward a large crater called Endeavor and continues to make scientific discoveries. It has driven approximately 12 miles and returned more than 133,000 images.