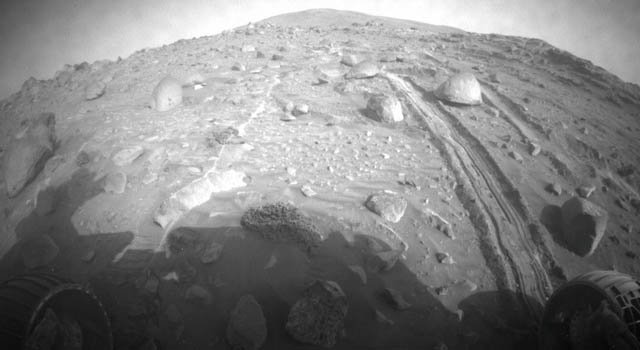 The track dug by the dragged right-front wheel as Spirit drove backward is visible in this image, receding toward the southeast.›  Full image and caption
Credit: NASA/JPL-Caltech

Loose soil piled against the northern edge of a low plateau has blocked Spirit from taking the shortest route toward its southward destinations for the upcoming Martian summer and following winter.

PASADENA, Calif. -- Loose soil piled against the northern edge of a low plateau called "Home Plate" has blocked NASA's Mars Exploration Rover Spirit from taking the shortest route toward its southward destinations for the upcoming Martian summer and following winter.

The rover has begun a trek skirting at least partway around the plateau instead of directly over it.

However, Spirit has also gotten a jump start on its summer science plans, examining a silica-rich outcrop that adds information about a long-gone environment that had hot water or steam. And even a circuitous route to the destinations chosen for Spirit would be much shorter than the overland expedition Spirit's twin, Opportunity, is making on the opposite side of Mars.

Both rovers landed on Mars in 2004 for what were originally planned as three-month missions there.

Spirit spent 2008 on the northern edge of Home Plate, a flat-topped deposit about the size of a baseball field, composed of hardened ash and rising about 1.5 meters (5 feet) above the ground around it. There, the north-facing tilt positioned Spirit's solar arrays to catch enough sunshine for the rover to survive the six-month-long Martian winter.

The scientists and engineers who operate the rovers chose as 2009 destinations a steep mound called "Von Braun" and an irregular, 45-meter-wide (150-foot-wide) bowl called "Goddard." These side-by-side features offer a promising area to examine while energy is adequate during the Martian summer and also to provide the next north-facing winter haven beginning in late 2009. Von Braun and Goddard intrigue scientists as sites where Spirit may find more evidence about an explosive mix of water and volcanism in the area's distant past. They are side-by-side, about 200 meters, or yards, south of where Spirit is now.

It's mid-spring now in the southern hemisphere of Mars. The sun has climbed higher in the sky over Spirit in recent weeks.

The rover team tried to drive Spirit onto Home Plate, heading south toward Von Braun and Goddard. They tried this first from partway up the slope where the rover had spent the winter. Only five of the six wheels on Spirit have been able to rotate since the right-front wheel stopped working in 2006. With five-wheel drive, Spirit couldn't climb the slope. In January and February, Spirit descended from Home Plate and drove eastward about 15 meters (about 50 feet) toward a less steep on-ramp. Spinning wheels in loose soil led the rover team to choose another of its options.

"Spirit could not make progress in the last two attempts to get up onto Home Plate," said John Callas of NASA's Jet Propulsion Laboratory, Pasadena, Calif., project manager for both rovers. "Alternatively, we are driving Spirit around Home Plate to the east. Spirit will have to go around a couple of small ridges that extend to the northeast, and then see whether a route east of Home Plate looks traversable. If that route proves not to be traversable, a route around the west side of Home Plate is still an option."

During the drive eastward just north of Home Plate in January, Spirit stopped to use tools on its robotic arm to examine a nodular, heavily eroded outcrop dubbed "Stapledon," which had caught the eye of rover-team scientist Steve Ruff when he looked at images and infrared spectra Spirit took from its winter position.

"It looked like the material east of Home Plate that we found to be rich in silica," said Ruff, of Arizona State University, Tempe. "The silica story around Home Plate is the most important finding of the Spirit mission so far with regard to habitability. Silica this concentrated forms around hot springs or steam vents, and both of those are favorable environments for life on Earth."

Sure enough, Spirit's alpha particle X-ray spectrometer found Stapledon to be rich in silica, too.

"Now we have found silica on a second side of Home Plate, expanding the size of the environment we know was affected by hot springs or steam vents," Ruff said. "The bigger this system, the more water was involved, the more habitable this system may have been."

The contact measurement with the X-ray spectrometer also gave the team confidence in its ability to identify silica-rich outcrops from a distance with the rover's thermal emission spectrometer, despite some dust that has accumulated on a periscope mirror of that instrument. Researchers plan to use Spirit's thermal emission spectrometer and panoramic camera to check for more silica-rich outcrops on the route to Von Braun and Goddard. However, the team has set a priority to make good progress toward those destinations. Winds cleaned some dust off Spirit's solar panels on Feb. 6 and Feb. 14, resulting in a combined increase of about 20 percent in the amount of power available to the rover.

Opportunity, meanwhile, shows signs of increased friction in its right-front wheel. The team is driving the rover backwards for a few sols, a technique that has helped in similar situations in the past, apparently by redistributing lubricant in the wheel. Opportunity's major destination is Endeavour Crater, about 22 kilometers (14 miles) in diameter and still about 12 kilometers (7 miles) away to the southeast. Opportunity has been driving south instead of directly toward Endurance, to swing around an area where loose soil appears deep enough to potentially entrap the rover.

JPL, a division of the California Institute of Technology, Pasadena, manages the Mars Exploration Rovers for the NASA Science Mission Directorate, Washington. More information about the rovers is at http://www.nasa.gov/rovers .
›  Rover home page