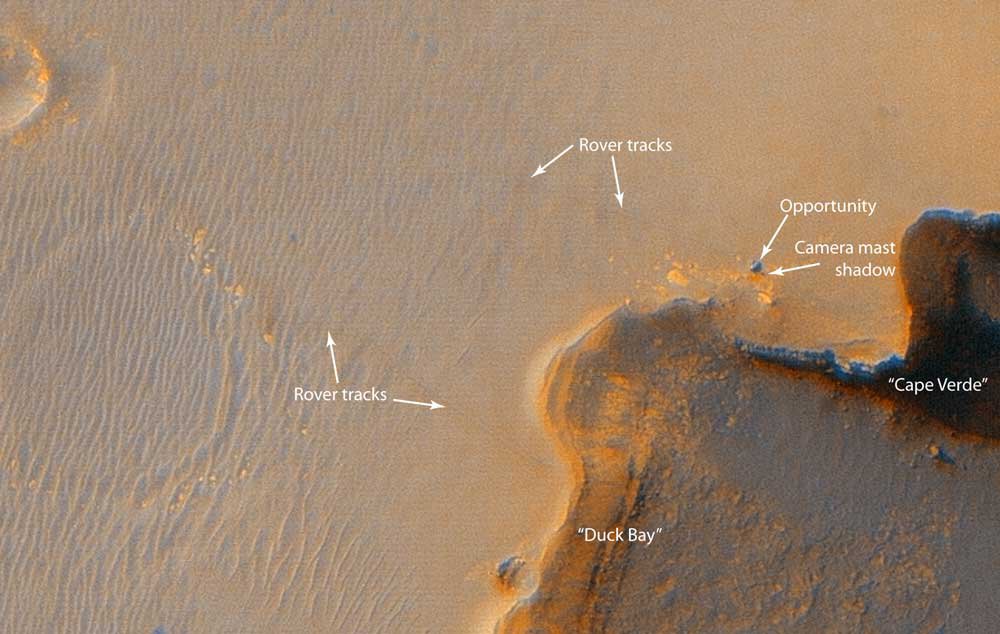 The image above is a view of the Opportunity rover, taken from space by NASA's Mars Reconnaissance Orbiter.+ Full image and caption
Credit: NASA/JPL/UA

This view from Opportunity is looking southeast from "Duck Bay" towards the dramatic promontory called "Cabo Frio."+ Full image and caption
Credit: NASA/JPL/Cornell

While Opportunity spent its first week at the crater, NASA's newest eye in the Martian sky photographed the rover and its surroundings from above. The level of detail in the photo from the high-resolution camera on the Mars Reconnaissance Orbiter will help guide the rover's exploration of Victoria.

"This is a tremendous example of how our Mars missions in orbit and on the surface are designed to reinforce each other and expand our ability to explore and discover," said Doug McCuistion, director of NASA's Mars Exploration Program in Washington. "You can only achieve this compelling level of exploration capability with the sustained exploration approach we are conducting at Mars through integrated orbiters and landers."

"The combination of the ground-level and aerial view is much more powerful than either alone," said Steve Squyres of Cornell University, Ithaca, N.Y. Squyres is principal investigator for Opportunity and its twin, Spirit. "If you were a geologist driving up to the edge of a crater in your jeep, the first thing you would do would be to pick up the aerial photo you brought with you and use it to understand what you're seeing from ground level. That's exactly what we're doing here."

Exposed geological layers in the cliff-like portions of Victoria's inner wall appear to record a longer span of Mars' environmental history than the rover has studied in smaller craters. Victoria is five times larger than any crater Opportunity has visited during its Martian trek.

High-resolution color images taken by Opportunity's panoramic camera since Sept. 28 reveal previously unseen patterns in the layers. "There are distinct variations in the sedimentary layering as you look farther down in the stack," Squyres said. "That tells us environmental conditions were not constant."

Within two months after landing on Mars in early 2004, Opportunity found geological evidence for a long-ago environment that was wet. Scientists hope the layers in Victoria will provide new clues about whether that wet environment was persistent, fleeting or cyclical.

The rovers have worked on Mars for more than 10 times their originally planned three-month missions. "Opportunity shows a few signs of aging but is in good shape for undertaking exploration of Victoria crater," said John Callas, project manager for the rovers at NASA's Jet Propulsion Laboratory, Pasadena, Calif.

"What we see so far just adds to the excitement. The team has worked heroically for nearly 21 months driving the rover here, and now we're all rewarded with views of a spectacular landscape of nearly 50-foot-thick exposures of layered rock," said Jim Bell of Cornell. Bell is lead scientist for the rovers' panoramic cameras. NASA plans to drive Opportunity from crater ridge to ridge, studying nearby cliffs across the intervening alcoves and looking for safe ways to drive the rover down. "It's like going to the Grand Canyon and seeing what you can from several different overlooks before you walk down," Bell said.

The orbiter images will help the team choose which way to send Opportunity around the rim, and where to stop for the best views. Conversely, the rover's ground-level observations of some of the same features will provide useful information for interpreting orbital images.

"The ground-truth we get from the rover images and measurements enables us to better interpret features we see elsewhere on Mars, including very rugged and dramatic terrains that we can't currently study on the ground," said Alfred McEwen of the University of Arizona, Tucson. He is principal investigator for the orbiter's High Resolution Imaging Science Experiment camera.

JPL manages the rovers and orbiter for NASA's Science Mission Directorate. JPL is a division of the California Institute of Technology in Pasadena.

For images and information about the rovers, visit:

For images and information about the Mars Reconnaissance Orbiter, visit: