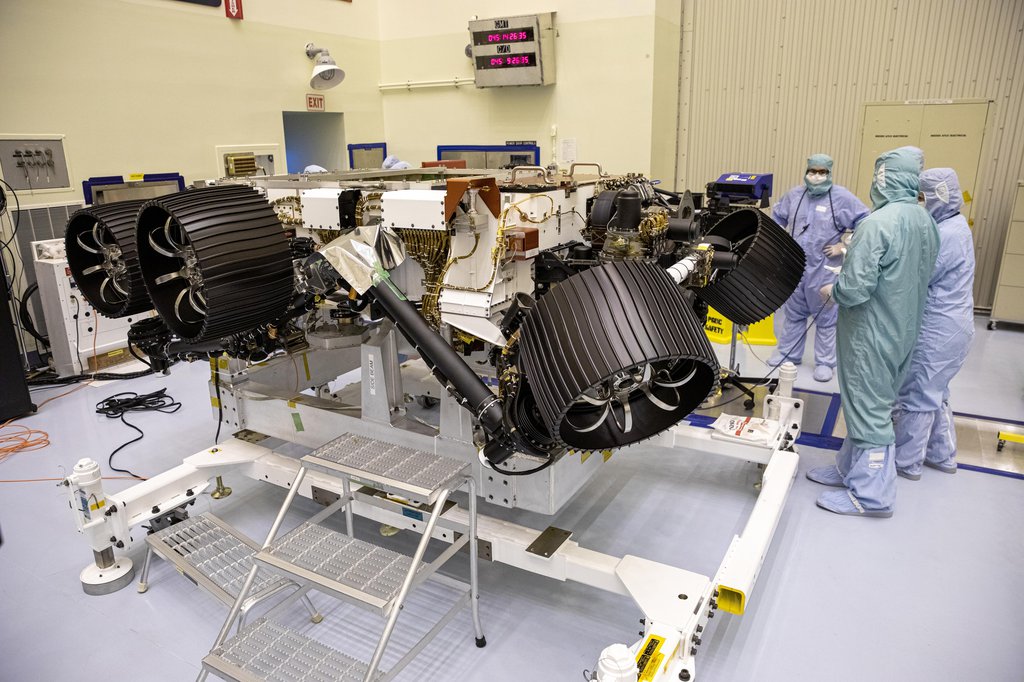 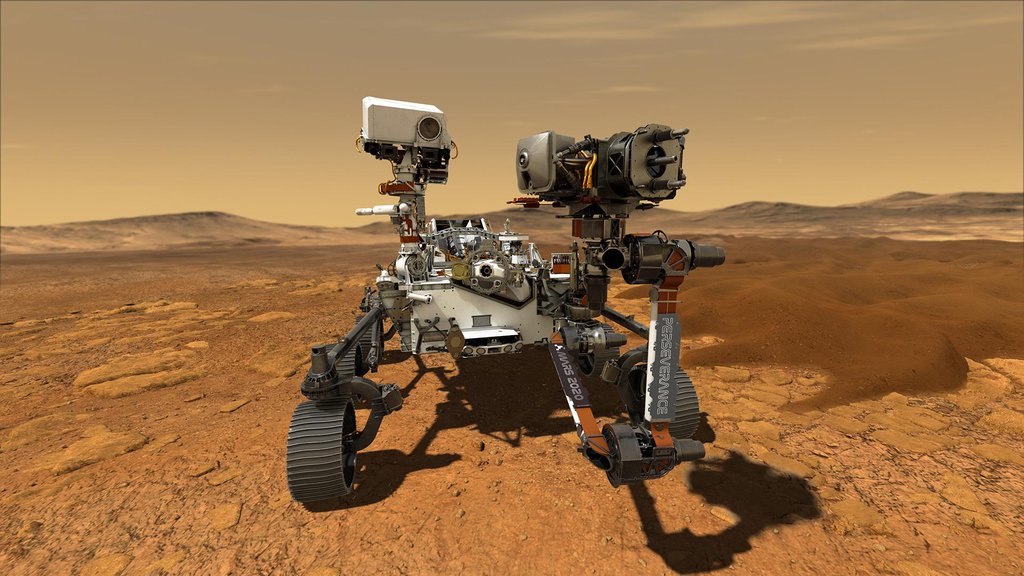 This illustration depicts NASA's Perseverance rover operating on the surface of Mars.

The system will be collecting and storing Martian rock and soil. Its installation marks another milestone in the march toward the July launch period.

With the launch period for NASA's Mars Perseverance rover opening in a little less than four months, the six-wheeler is reaching significant pre-launch milestones almost daily at the Kennedy Space Center in Cape Canaveral, Florida. The rover had some components removed prior to being shipped from NASA's Jet Propulsion Laboratory in Southern California to the Cape in early February. Last week, Perseverance's assembly, test and launch operations team integrated two components that will play key roles in the acquisition, containment and eventual return to Earth of humanity's first samples from another planet: the Adaptive Caching Assembly and the Bit Carousel.

The Bit Carousel contains the nine drill bits Perseverance will use to sample Martian rock and dust. Attached to the top front of the rover on March 7 and resembling a flying saucer, it also is the gateway for the samples to move into the belly of the rover for assessment and processing by the Adaptive Caching System.

Installed on March 3, the Adaptive Caching Assembly consists of seven motors and more than 3,000 parts, all working in unison to collect samples from the surface of Mars. A chief component of the assembly is the Sample Handling Arm, which will move sample tubes to the main robotic arm's coring drill and then transfer the filled sample tubes into a space to be sealed and stored.

The installation and testing of the electrical wiring for both the Adaptive Caching Assembly and Bit Carousel were completed on March 11.

"With the addition of the Adaptive Caching Assembly and Bit Carousel, the heart of our sample collection system is now on board the rover," said Matt Wallace, deputy project manager of the Mars 2020 mission at JPL. "Our final but most crucial elements to install will be the sample tubes that will contain the first samples that will be brought from another planet back to Earth for analysis. We will keep these pristine until we integrate them in a couple of months."

Currently, the coronavirus has not impacted the Mars Perseverance rover launch schedule. Launch preparations are continuing.

The Perseverance rover is a robotic scientist weighing just under 2,300 pounds (1,043 kilograms). It will search for signs of past microbial life, characterize Mars' climate and geology, collect samples for future return to Earth and help pave the way for human exploration of the Red Planet. No matter what day Perseverance launches during the launch period, which extends from July 17 through Aug. 5, it will alight on Mars' Jezero Crater just after 3:40 p.m. EST (12:40 p.m. PST) on Feb. 18, 2021.

JPL, which is managed by Caltech in Pasadena, is building and will manage operations of the Mars Perseverance rover for NASA. The agency's Launch Services Program, based at the agency's Kennedy Space Center in Florida, is responsible for launch management. The Mars 2020 project with its Perseverance rover is part of a larger program that includes missions to the Moon as a way to prepare for human exploration of the Red Planet. Charged with returning astronauts to the Moon by 2024, NASA will establish a sustained human presence on and around the Moon by 2028 through NASA's Artemis lunar exploration plans.