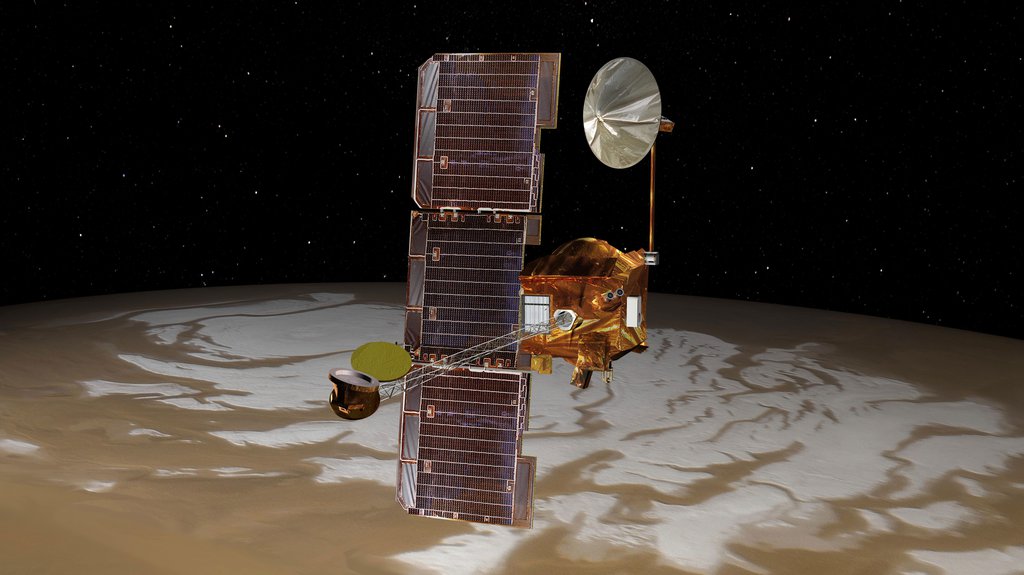 "We are delighted with the quality of data we're seeing," said Dr. Steve Saunders, Odyssey project scientist at JPL. "We'll use it to build on what we've learned from Mars Global Surveyor and other missions. Now we may actually see water rather than guessing where it is or was. And with the thermal images we are able to examine surface geology from a new perspective."

"These preliminary Odyssey observations are the "tip of the iceberg" of the science results that are soon to come, so stay tuned," said Dr. Jim Garvin, lead scientist of the Mars Exploration Program at NASA Headquarters, Washington, D.C.

New images taken by the thermal emission imaging system show the temperature of the surface at a remarkable level of clarity and detail during both the martian day and night. The images can be seen at http://mars.jpl.nasa.gov/odyssey and http://themis.asu.edu/latest . Odyssey's camera system is studying Mars' surface mineralogy to reveal geologic history. The thermal infrared images are 30 times sharper than previously available images, and the camera's visible-light images will fill a gap in resolution between Viking Orbiter and Mars Global Surveyor pictures.

Initial measurements by the gamma ray spectrometer instrument suite show the presence of significant amounts of hydrogen in the south polar region of Mars. The high hydrogen content is most likely due to water ice, though the amount of ice cannot be quantified yet. Further analysis will be conducted to confirm the interpretation. The detection of hydrogen is based both on the intensity of gamma rays emitted by hydrogen, and by the intensity of neutrons that are moderated by hydrogen. The neutron intensity was observed by the high energy neutron detector and the neutron spectrometer.

"The preliminary assessment of the gamma-ray spectrometer data indicates the likely presence of hydrogen in the upper few feet of the martian surface as sampled at spatial scales approximately 400 miles across. Further analysis and another month or so of mapping will permit more quantitative assessment of these observations and allow for a refined interpretation," said Garvin.

Measurements made by the martian radiation environment experiment during Odyssey's cruise phase suggest that the daily dose of radiation experienced by astronauts on their way from Earth to Mars would be more than twice the dose endured by astronauts on the International Space Station. Investigators are in the process of troubleshooting the radiation experiment to determine why the instrument stopped communicating and was turned off in August 2001.

The Jet Propulsion Laboratory manages the 2001 Mars Odyssey mission for NASA's Office of Space Science, Washington, D.C. Investigators at Arizona State University in Tempe, the University of Arizona in Tucson, and NASA's Johnson Space Center, Houston, operate the science instruments. Additional science partners are located at the Russian Aviation and Space Agency, which provided the high-energy neutron detector, and at Los Alamos National Laboratories, New Mexico, which provided the neutron spectrometer. Lockheed Martin Astronautics, Denver, is the prime contractor for the project, and developed and built the orbiter. Mission operations are conducted jointly from Lockheed Martin and from JPL, a division of the California Institute of Technology in Pasadena.