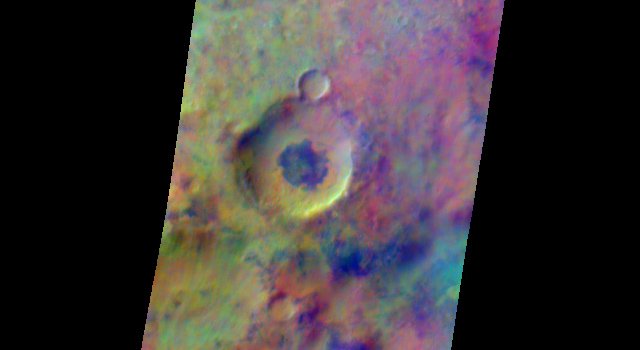 Pastel colors swirl across Mars, revealing differences in the composition and nature of the surface in this false-color infrared image taken on May 22, 2009,by the Thermal Emission Imaging System (THEMIS) camera on NASA's Mars Odyssey orbiter. › Full image and caption

NASA's long-lived Mars Odyssey spacecraft has completed an eight-month adjustment of its orbit.

PASADENA, Calif. -- NASA's long-lived Mars Odyssey spacecraft has completed an eight-month adjustment of its orbit, positioning itself to look down at the day side of the planet in mid-afternoon instead of late afternoon.

This change gains sensitivity for infrared mapping of Martian minerals by the orbiter's Thermal Emission Imaging System camera. Orbit design for Odyssey's first seven years of observing Mars used a compromise between what worked best for the infrared mapping and for another onboard instrument.

"The orbiter is now overhead at about 3:45 in the afternoon instead of 5 p.m., so the ground is warmer and there is more thermal energy for the camera's infrared sensors to detect," said Jeffrey Plaut of NASA's Jet Propulsion Laboratory, Pasadena, Calif., project scientist for Mars Odyssey.

Some important mineral discoveries by Odyssey stem from mapping done during six months early in the mission when the orbit geometry provided mid-afternoon overpasses. One key example: finding salt deposits apparently left behind when large bodies of water evaporated.

"The new orbit means we can now get the type of high-quality data for the rest of Mars that we got for 10 or 20 percent of the planet during those early six months," said Philip Christensen of Arizona State University, Tempe, principal investigator for the Thermal Emission Imaging System.

Here's the trade-off: The orbital shift to mid-afternoon will stop the use of one of three instruments in Odyssey's Gamma Ray Spectrometer suite. The new orientation will soon result in overheating a critical component of the suite's gamma ray detector. The suite's neutron spectrometer and high-energy neutron detector are expected to keep operating. The Gamma Ray Spectrometer provided a dramatic 2002 discovery of water-ice near the Martian surface in large areas. The gamma ray detector has also mapped global distribution of many elements, such as iron, silicon and potassium.

Last year, before the start of a third two-year extension of the Odyssey mission, a panel of planetary scientists assembled by NASA recommended the orbit adjustment to maximize science benefits from the spacecraft in coming years.

Odyssey's orbit is synchronized with the sun. Picture Mars rotating beneath the polar-orbiting spacecraft with the sun off to one side. The orbiter passes from near the north pole to near the south pole over the day-lit side of Mars. At each point on the Mars surface that turns beneath Odyssey, the solar time of day when the southbound spacecraft passes over is the same. During the five years prior to October 2008, that local solar time was about 5 p.m. whenever Odyssey was overhead. (Likewise, the local time was about 5 a.m. under the track of the spacecraft during the south-to-north leg of each orbit, on the night side of Mars.)

On Sept. 30, 2008, Odyssey fired thrusters for six minutes, putting the orbiter into a "drift" pattern of gradually changing the time-of-day of its overpasses during the next several months. On June 9, Odyssey's operations team at JPL and at Denver-based Lockheed Martin Space Systems commanded the spacecraft to fire the thrusters again. This five-and-a-half-minute burn ended the drift pattern and locked the spacecraft into the mid-afternoon overpass time. "The maneuver went exactly as planned," said JPL's Gaylon McSmith, Odyssey mission manager.

In another operational change motivated by science benefits, Odyssey has begun in recent weeks making observations other then straight downward-looking. This more-flexible targeting allows imaging of some latitudes near the poles that are never directly underneath the orbiter, and allows faster filling-in of gaps not covered by previous imaging.

"We are using the spacecraft in a new way," McSmith said.

In addition to extending its own scientific investigations, the Odyssey mission continues to serve as the radio relay for almost all data from NASA's Mars Exploration Rovers, Spirit and Opportunity. Odyssey's new orbital geometry helps prepare the mission to be a relay asset for NASA's Mars Science Laboratory mission, scheduled to put the rover Curiosity on Mars in 2012.

Mars Odyssey, launched in 2001, is managed by JPL, a division of the California Institute of Technology, Pasadena, for NASA's Science Mission Directorate, Washington. Lockheed Martin Space Systems is the prime contractor for the project. Investigators at Arizona State University operate the Thermal Emission Imaging System. Investigators at the University of Arizona, Tucson, head operation of the Gamma Ray Spectrometer. Additional science partners are located at the Russian Aviation and Space Agency, which provided the high-energy neutron detector, and at Los Alamos National Laboratories, New Mexico, which provided the neutron spectrometer.