NASA's Mars InSight Lander to Push on Top of the 'Mole'

NASA InSight recently moved its robotic arm closer to its digging device, called the "mole," in preparation to push on its top, or back cap.
Credit: NASA/JPL-Caltech 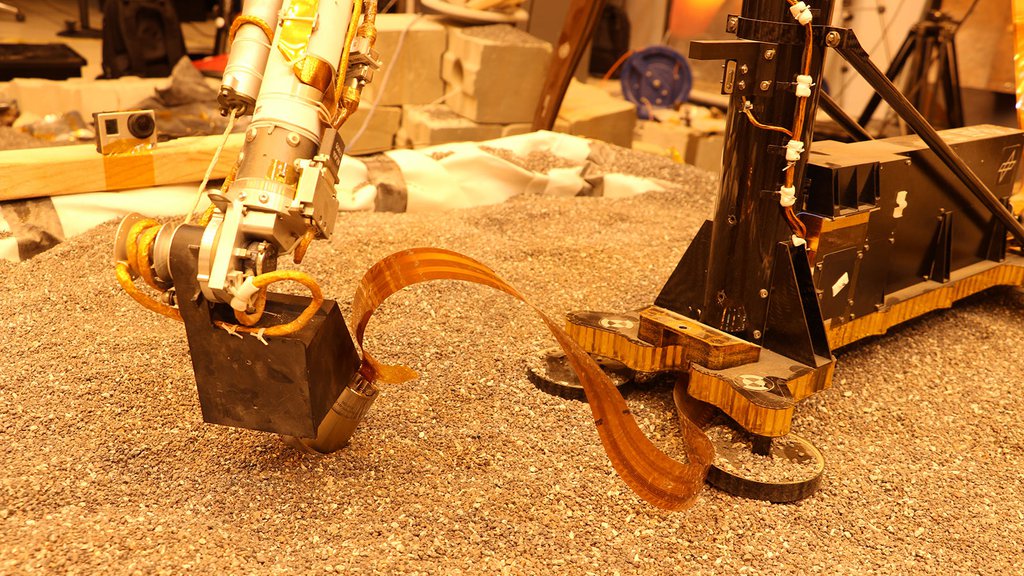 This test using an engineering model of the InSight lander here on Earth shows how the spacecraft on Mars will use its robotic arm to press on a digging device, called the "mole."
Credit: NASA/JPL-Caltech

Engineers have a plan for pushing down on the heat probe, which has been stuck at the Martian surface for a year.

After nearly a year of trying to dig into the Martian surface, the heat probe belonging to NASA's InSight lander is about to get a push. The mission team plans to command the scoop on InSight's robotic arm to press down on the "mole," the mini pile driver designed to hammer itself as much as 16 feet (5 meters) down. They hope that pushing down on the mole's top, also called the back cap, will keep it from backing out of its hole on Mars, as it did twice in recent months after nearly burying itself.

Part of an instrument called the Heat Flow and Physical Properties Package, or HP3, the mole is a 16-inch-long (40-centimeter-long) spike equipped with an internal hammering mechanism. While burrowing into the soil, it is designed to drag with it a ribbonlike tether that extends from the spacecraft. Temperature sensors are embedded along the tether to measure heat coming deep from within the planet's interior to reveal important scientific details about the formation of Mars and all rocky planets, including Earth. HP3 was provided to NASA by the German Aerospace Center, or DLR.

The team has avoided pushing on the back cap until now to avoid any potential damage to the tether.

The mole found itself stuck on Feb. 28, 2019, the first day of hammering. The InSight team has since determined that the soil here is different than what has been encountered on other parts of Mars.InSight landed in an area with an unusually thick duricrust, or a layer of cemented soil. Rather than being loose and sandlike, as expected, the dirt granules stick together.

The mole needs friction from soil in order to travel downward; without it, recoil from its self-hammering action causes it to simply bounce in place. Ironically, loose soil, not duricrust, provides that friction as it falls around the mole.

This past summer, the InSight team started using the robotic arm's scoop to press on the side of the mole, a technique called "pinning" that added just enough friction to help it dig without coming in contact with the fragile science tether connected to the mole's back cap.

While pinning helped, the mole popped back out of the Martian soil on two occasions, possibly from soil building up from beneath. With few alternatives left, the team has decided to try helping the mole dig by carefully pressing on its back cap while attempting to avoid the tether.

It might take several tries to perfect the back-cap push, just as pinning did. Throughout late February and early March, InSight's arm will be maneuvered into position so that the team can test what happens as the mole briefly hammers.

Meanwhile, the team is also considering using the scoop to move more soil into the hole that has formed around the mole. This could add more pressure and friction, allowing it to finally dig down. Whether they pursue this route depends on how deep the mole is able to travel after the back-cap push.

For more about InSight, read here: