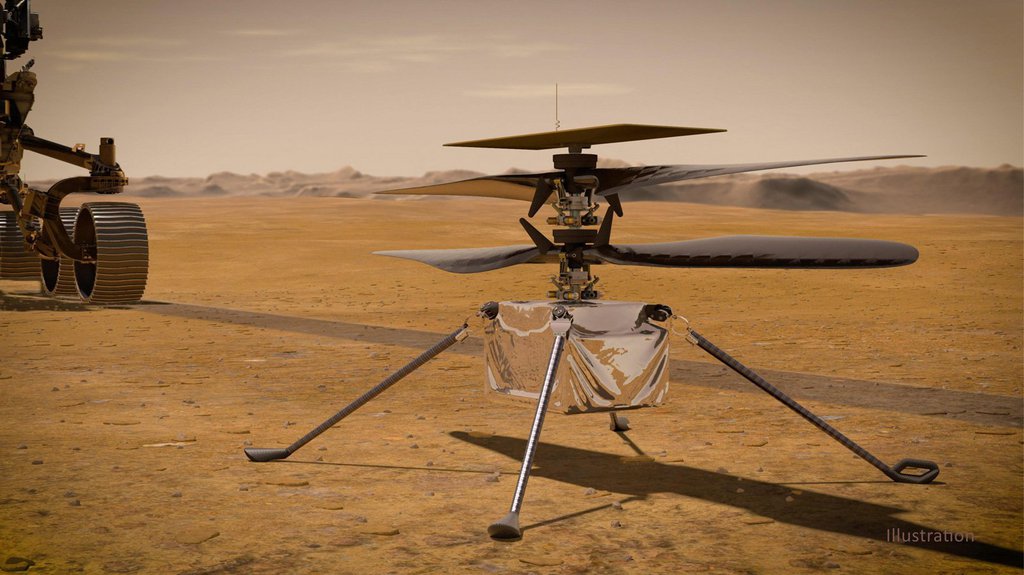 The technology demonstration has phoned home from where it is attached to the belly of NASA’s Perseverance rover.

Mission controllers at NASA’s Jet Propulsion Laboratory in Southern California have received the first status report from the Ingenuity Mars Helicopter, which landed Feb. 18, 2021, at Jezero Crater attached to the belly of the agency’s Mars 2020 Perseverance rover. The downlink, which arrived at 3:30 p.m. PST (6:30 p.m. EST) via a connection through the Mars Reconnaissance Orbiter, indicates that both the helicopter, which will remain attached to the rover for 30 to 60 days, and its base station (an electrical box on the rover that stores and routes communications between the rotorcraft and Earth) are operating as expected.

“There are two big-ticket items we are looking for in the data: the state of charge of Ingenuity’s batteries as well as confirmation the base station is operating as designed, commanding heaters to turn off and on to keep the helicopter’s electronics within an expected range,” said Tim Canham, Ingenuity Mars Helicopter operations lead at JPL. “Both appear to be working great. With this positive report, we will move forward with tomorrow’s charge of the helicopter’s batteries.”

Ensuring that Ingenuity has plenty of stored energy aboard to maintain heating and other vital functions while also maintaining optimal battery health is essential to the success of the Mars Helicopter. The one-hour power-up will boost the rotorcraft’s batteries to about 30% of its total capacity. A few days after that, they’ll be charged again to reach 35%, with future charging sessions planned weekly while the helicopter is attached to the rover. The data downlinked during tomorrow’s charge sessions will be compared to battery-charging sessions done during cruise to Mars to help the team plan future charging sessions.

Like much of the 4-pound (2-kilogram) rotorcraft, the six lithium-ion batteries are off-the-shelf. They currently receive recharges from the rover’s power supply. Once Ingenuity is deployed to Mars’ surface, the helicopter’s batteries will be charged solely by its own solar panel.

After Perseverance deploys Ingenuity to the surface, the helicopter will then have a 30-Martian-day (31-Earth-day) experimental flight test window. If Ingenuity survives its first bone-chilling Martian nights – where temperatures dip as low as minus 130 degrees Fahrenheit (minus 90 degrees Celsius) – the team will proceed with the first flight of an aircraft on another world.

If Ingenuity succeeds in taking off and hovering during its first flight, over 90% of the project’s goals will have been achieved. If the rotorcraft lands successfully and remains operable, up to four more flights could be attempted, each one building on the success of the last.

“We are in uncharted territory, but this team is used to that,” said MiMi Aung, project manager for the Ingenuity Mars Helicopter at JPL. “Just about every milestone from here through the end of our flight demonstration program will be a first, and each has to succeed for us to go on to the next. We’ll enjoy this good news for the moment, but then we have to get back to work.”

Next-generation rotorcraft, the descendants of Ingenuity, could add an aerial dimension to future exploration of the Red Planet. These advanced robotic flying vehicles would offer a unique viewpoint not provided by current orbiters high overhead or by rovers and landers on the ground, providing high-definition images and reconnaissance for robots or humans, and enable access to terrain that is difficult for rovers to reach.