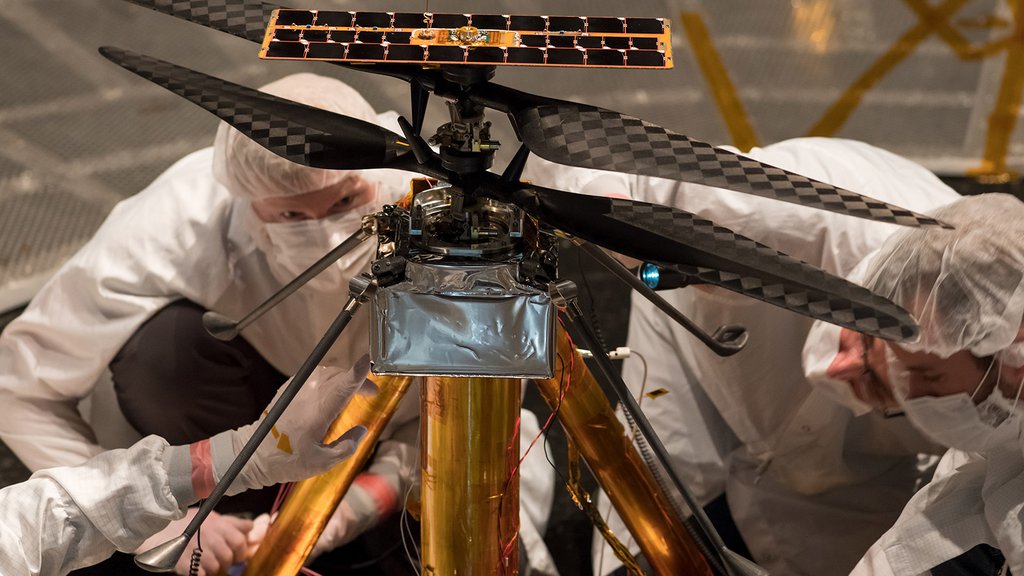 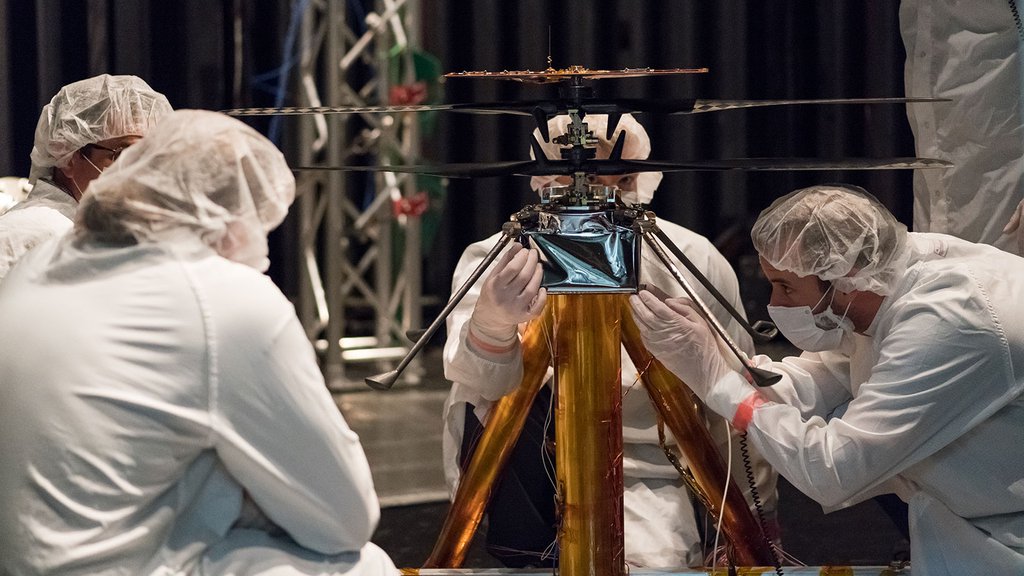 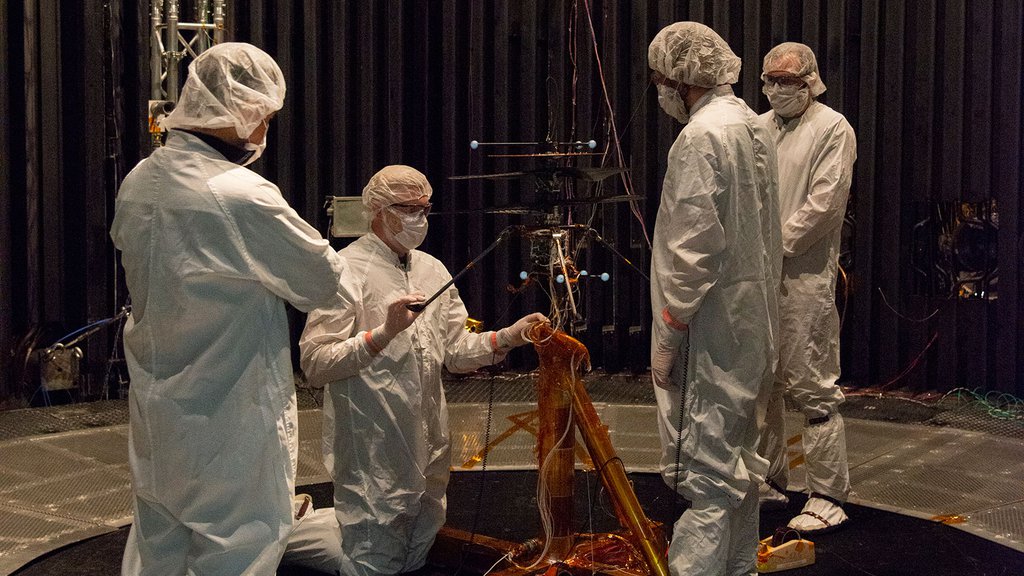 Members of NASA's Mars Helicopter team prepare the flight model (vehicle going to Mars) for a test in the Space Simulator, a 25-foot-wide (7.62-meter-wide) vacuum chamber at NASA's Jet Propulsion Laboratory in Pasadena, California. The image was taken on Jan. 18, 2019.› Full image and caption
Credit: NASA/JPL-Caltech 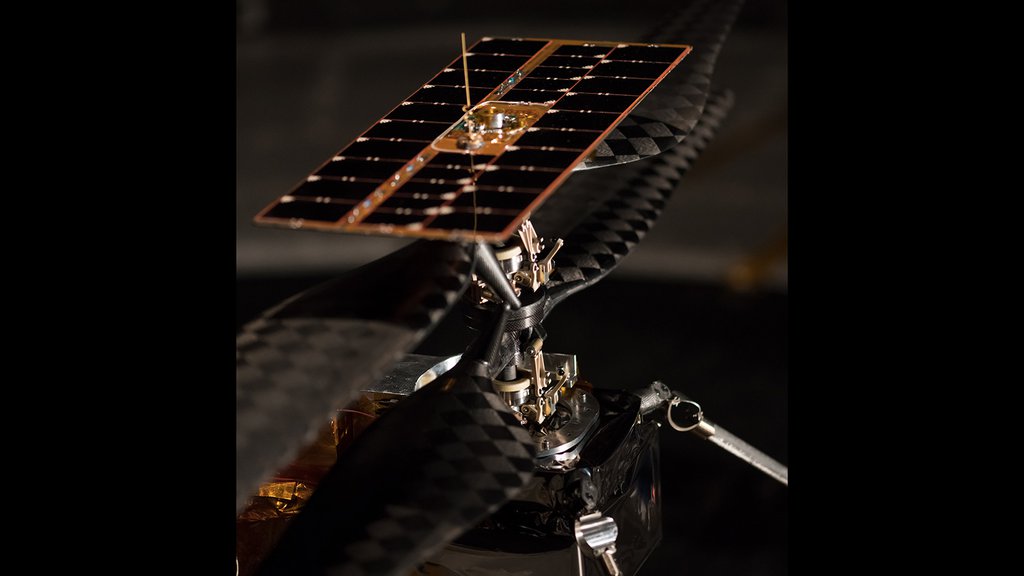 More than 1,500 individual pieces of carbon fiber, flight-grade aluminum, silicon, copper, foil and foam go into a Mars Helicopter. This image of the Flight Model (the actual vehicle going to the Red Planet), was taken on Feb. 1, 2019 when the helicopter was inside the Space Simulator, a 25-foot (7.62 meter) wide vacuum chamber at NASA's Jet Propulsion Laboratory in Pasadena, California.› Full image and caption
Credit: NASA/JPL-Caltech 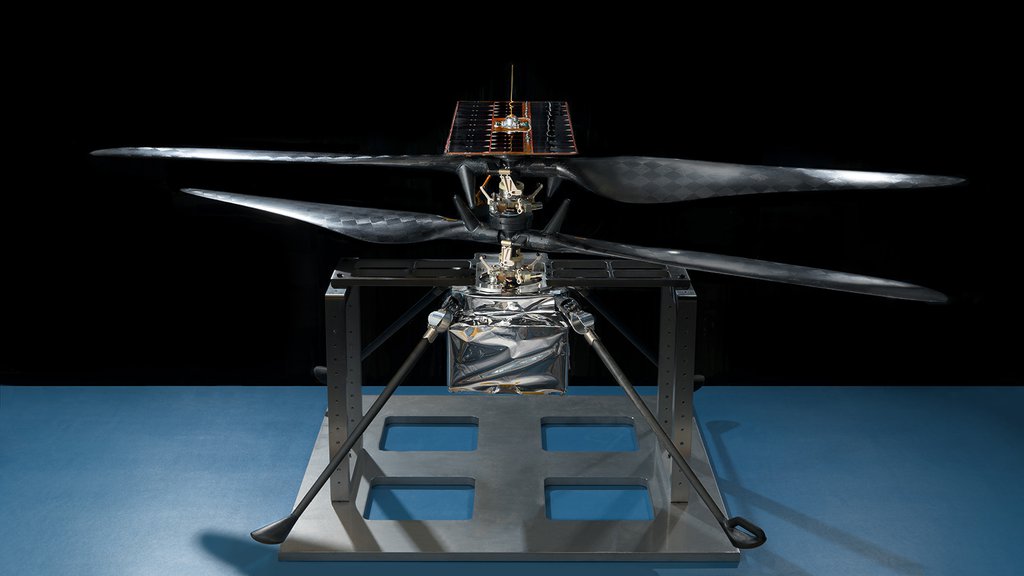 This image of the flight model of NASA's Mars Helicopter was taken on Feb. 14, 2019, in a cleanroom at NASA's Jet Propulsion Laboratory in Pasadena, California. The aluminum base plate, side posts, and crossbeam around the helicopter protect the helicopter's landing legs and the attachment points that will hold it to the belly of the Mars 2020 rover.› Full image and caption
Credit: NASA/JPL-Caltech 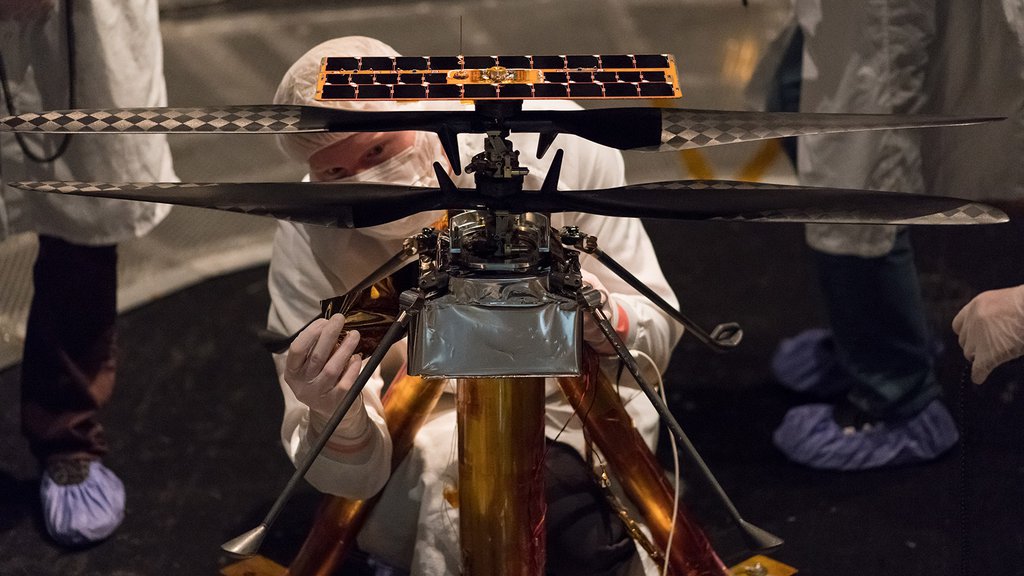 Members of the NASA Mars Helicopter team attach a thermal film to the exterior of the flight model of the Mars Helicopter. The image was taken on Feb. 1, 2019 inside the Space Simulator, a 25-foot-wide (7.62-meter-wide) vacuum chamber at NASA's Jet Propulsion Laboratory in Pasadena, California.› Full image and caption
Credit: NASA/JPL-Caltech

The first helicopter to fly on Mars had its first flight on Earth.

Since the Wright brothers first took to the skies of Kill Devil Hills, North Carolina, Dec. 17, 1903, first flights have been important milestones in the life of any vehicle designed for air travel. After all, it's one thing to design an aircraft and make it fly on paper - or computer. It is quite another to put all the pieces together and watch them get off the ground.

In late January 2019, all the pieces making up the flight model (actual vehicle going to the Red Planet) of NASA's Mars Helicopter were put to the test.

Weighing in at no more than 4 pounds (1.8 kilograms), the helicopter is a technology demonstration project currently going through the rigorous verification process certifying it for Mars.

The majority of the testing the flight model is going through had to do with demonstrating how it can operate on Mars, including how it performs at Mars-like temperatures. Can the helicopter survive - and function - in cold temperatures, including nights with temperatures as low as minus 130 degrees Fahrenheit (minus 90 degrees Celsius)?

All this testing is geared towards February 2021, when the helicopter will reach the surface of the Red Planet, firmly nestled under the belly of the Mars 2020 rover. A few months later, it will be deployed and test flights (up to 90 seconds long) will begin - the first from the surface of another world.

"Gearing up for that first flight on Mars, we have logged over 75 minutes of flying time with an engineering model, which was a close approximation of our helicopter," said MiMi Aung, project manager for the Mars Helicopter at NASA's Jet Propulsion Laboratory in Pasadena, California. "But this recent test of the flight model was the real deal. This is our helicopter bound for Mars. We needed to see that it worked as advertised."

While flying helicopters is commonplace here on Earth, flying hundreds of millions of miles (kilometers) away in the thin Martian atmosphere is something else entirely. And creating the right conditions for testing here on Earth presents its own set of challenges.

"The Martian atmosphere is only about one percent the density of Earth's," said Aung. "Our test flights could have similar atmospheric density here on Earth - if you put your airfield 100,000 feet (30,480 meters) up. So you can't go somewhere and find that. You have to make it."

Aung and her Mars Helicopter team did just that in JPL's Space Simulator, a 25-foot-wide (7.62-meter-wide) vacuum chamber. First, the team created a vacuum that sucks out all the nitrogen, oxygen and other gases from the air inside the mammoth cylinder. In their place the team injected carbon dioxide, the chief ingredient of Mars' atmosphere.

"Getting our helicopter into an extremely thin atmosphere is only part of the challenge," said Teddy Tzanetos, test conductor for the Mars Helicopter at JPL. "To truly simulate flying on Mars we have to take away two-thirds of Earth's gravity, because Mars' gravity is that much weaker."

The team accomplished this with a gravity offload system - a motorized lanyard attached to the top of the helicopter to provide an uninterrupted tug equivalent to two-thirds of Earth's gravity. While the team was understandably concerned with how the helicopter would fare on its first flight, they were equally concerned with how the gravity offload system would perform.

"The gravity offload system performed perfectly, just like our helicopter," said Tzanetos. "We only required a 2-inch (5-centimeter) hover to obtain all the data sets needed to confirm that our Mars helicopter flies autonomously as designed in a thin Mars-like atmosphere; there was no need to go higher. It was a heck of a first flight."

The Mars Helicopter's first flight was followed up by a second in the vacuum chamber the following day. Logging a grand total of one minute of flight time at an altitude of 2 inches (5 centimeters), more than 1,500 individual pieces of carbon fiber, flight-grade aluminum, silicon, copper, foil and foam have proven that they can work together as a cohesive unit.

"The next time we fly, we fly on Mars," said Aung. "Watching our helicopter go through its paces in the chamber, I couldn't help but think about the historic vehicles that have been in there in the past. The chamber hosted missions from the Ranger Moon probes to the Voyagers to Cassini, and every Mars rover ever flown. To see our helicopter in there reminded me we are on our way to making a little chunk of space history as well."

The Mars Helicopter project at JPL in Pasadena, California, manages the helicopter development for the Science Mission Directorate at NASA Headquarters in Washington.

The Mars Helicopter will launch as a technology demonstrator with the Mars 2020 rover on a United Launch Alliance Atlas V rocket in July 2020 from Space Launch Complex 41 at Cape Canaveral Air Force Station, Florida. It is expected to reach Mars in February 2021.

The 2020 rover will conduct geological assessments of its landing site on Mars, determine the habitability of the environment, search for signs of ancient Martian life, and assess natural resources and hazards for future human explorers. Scientists will use the instruments aboard the rover to identify and collect samples of rock and soil, encase them in sealed tubes, and leave them on the planet's surface for potential return to Earth on a future Mars mission.

The Mars 2020 project at JPL in Pasadena, California, manages rover development for the Science Mission Directorate at NASA Headquarters. NASA's Launch Services Program, based at the agency's Kennedy Space Center in Florida, is responsible for launch management.