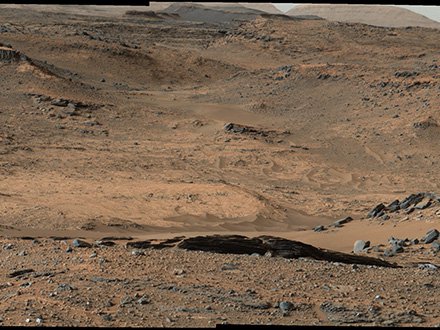 This image from NASA's Mars Curiosity rover shows the "Amargosa Valley," on the slopes leading up to Mount Sharp on Mars.› Full image and caption
Credit: NASA/JPL-Caltech/MSSS 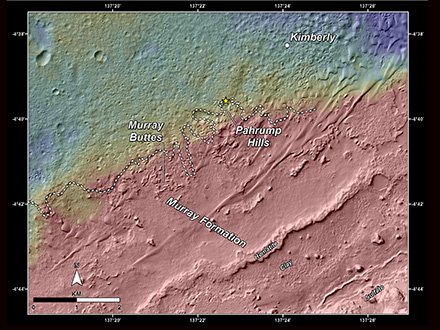 This topography map shows a portion of the Gale Crater region on Mars, where NASA's Mars Curiosity rover landed on August 6, 2012.› Full image and caption
Credit: NASA/JPL-Caltech/Univ. of Arizona 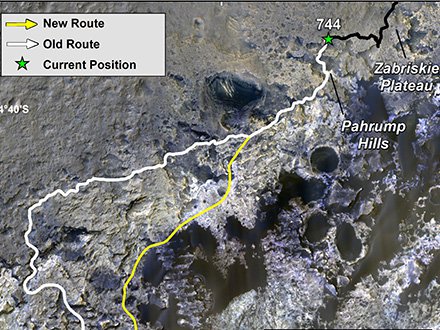 The route of NASA's Mars Curiosity rover up the slopes of Mount Sharp on Mars is indicated in yellow in this false-color image.› Full image and caption
Credit: NASA/JPL-Caltech/Univ. of Arizona 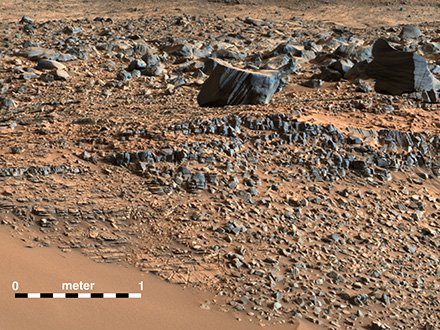 This portion of a color mosaic taken by NASA's Mars Curiosity rover shows strata exposed along the margins of the valleys in the "Pahrump Hills" region on Mars.› Full image and caption
Credit: NASA/JPL-Caltech/MSSS 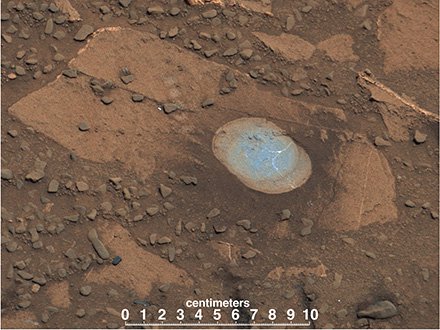 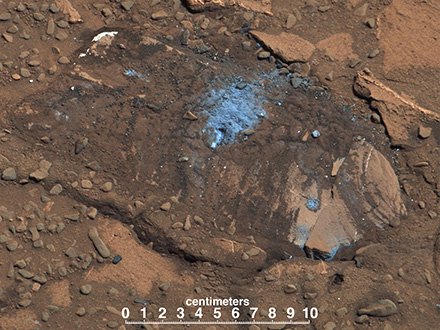 NASA's Mars Curiosity rover has reached Mount Sharp, a Mount-Rainier-size mountain at the center of the vast Gale Crater and the rover mission's long-term prime destination.

NASA's Mars Curiosity rover has reached the Red Planet's Mount Sharp, a Mount-Rainier-size mountain at the center of the vast Gale Crater and the rover mission's long-term prime destination.

"Curiosity now will begin a new chapter from an already outstanding introduction to the world," said Jim Green, director of NASA's Planetary Science Division at NASA Headquarters in Washington. "After a historic and innovative landing along with its successful science discoveries, the scientific sequel is upon us."

Curiosity's trek up the mountain will begin with an examination of the mountain's lower slopes. The rover is starting this process at an entry point near an outcrop called Pahrump Hills, rather than continuing on to the previously-planned, further entry point known as Murray Buttes. Both entry points lay along a boundary where the southern base layer of the mountain meets crater-floor deposits washed down from the crater's northern rim.

"It has been a long but historic journey to this Martian mountain," said Curiosity Project Scientist John Grotzinger of the California Institute of Technology in Pasadena. "The nature of the terrain at Pahrump Hills and just beyond it is a better place than Murray Buttes to learn about the significance of this contact. The exposures at the contact are better due to greater topographic relief."

The decision to head uphill sooner, instead of continuing to Murray Buttes, also draws from improved understanding of the region's geography provided by the rover's examinations of several outcrops during the past year. Curiosity currently is positioned at the base of the mountain along a pale, distinctive geological feature called the Murray formation. Compared to neighboring crater-floor terrain, the rock of the Murray formation is softer and does not preserve impact scars, as well. As viewed from orbit, it is not as well-layered as other units at the base of Mount Sharp.

Curiosity made its first close-up study last month of two Murray formation outcrops, both revealing notable differences from the terrain explored by Curiosity during the past year. The first outcrop, called Bonanza King, proved too unstable for drilling, but was examined by the rover's instruments and determined to have high silicon content. A second outcrop, examined with the rover's telephoto Mast Camera, revealed a fine-grained, platy surface laced with sulfate-filled veins.

While some of these terrain differences are not apparent in observations made by NASA's Mars orbiters, the rover team still relies heavily on images taken by the agency's Mars Reconnaissance Orbiter (MRO) to plan Curiosity's travel routes and locations for study.

For example, MRO images helped the rover team locate mesas that are over 60 feet (18 meters) tall in an area of terrain shortly beyond Pahrump Hills, which reveal an exposure of the Murray formation uphill and toward the south. The team plans to use Curiosity's drill to acquire a sample from this site for analysis by instruments inside the rover. The site lies at the southern end of a valley Curiosity will enter this week from the north.

Though this valley has a sandy floor the length of two football fields, the team expects it will be an easier trek than the sandy-floored Hidden Valley, where last month Curiosity's wheels slipped too much for safe crossing.

Curiosity reached its current location after its route was modified earlier this year in response to excessive wheel wear. In late 2013, the team realized a region of Martian terrain littered with sharp, embedded rocks was poking holes in four of the rover's six wheels. This damage accelerated the rate of wear and tear beyond that for which the rover team had planned. In response, the team altered the rover's route to a milder terrain, bringing the rover farther south, toward the base of Mount Sharp.

"The wheels issue contributed to taking the rover farther south sooner than planned, but it is not a factor in the science-driven decision to start ascending here rather than continuing to Murray Buttes first," said Jennifer Trosper, Curiosity Deputy Project Manager at NASA's Jet Propulsion Laboratory in Pasadena, California. "We have been driving hard for many months to reach the entry point to Mount Sharp," Trosper said. "Now that we've made it, we'll be adjusting the operations style from a priority on driving to a priority on conducting the investigations needed at each layer of the mountain."

After landing inside Gale Crater in August 2012, Curiosity fulfilled in its first year of operations its major science goal of determining whether Mars ever offered environmental conditions favorable for microbial life. Clay-bearing sedimentary rocks on the crater floor, in an area called Yellowknife Bay, yielded evidence of a lakebed environment billions of years ago that offered fresh water, all of the key elemental ingredients for life, and a chemical source of energy for microbes.

NASA's Mars Science Laboratory Project continues to use Curiosity to assess ancient habitable environments and major changes in Martian environmental conditions. The destinations on Mount Sharp offer a series of geological layers that recorded different chapters in the environmental evolution of Mars.

The Mars Exploration Rover Project is one element of NASA's ongoing preparation for a human mission to the Red Planet in the 2030s. JPL built Curiosity and manages the project and MRO for NASA's Science Mission Directorate in Washington.

Information about MRO activities is available online at:

Follow the Curiosity rover mission on social media at: