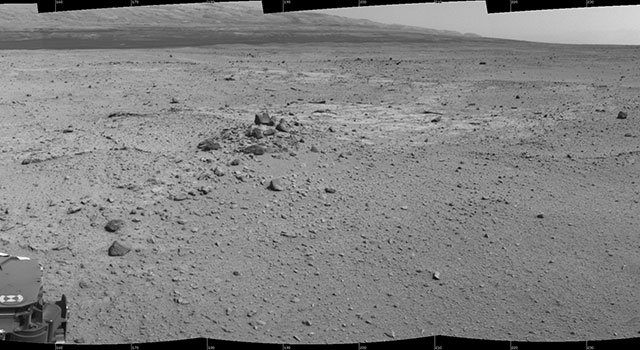 This mosaic of images from the Navigation Camera (Navcam) on NASA's Mars rover Curiosity shows the scene from the rover's position on the 376th Martian day, or sol, of the mission (Aug. 27, 2013). The images were taken right after Curiosity completed the first drive during which it used autonomous navigation on unknown ground.› Full image and caption
Credit: NASA/JPL-Caltech 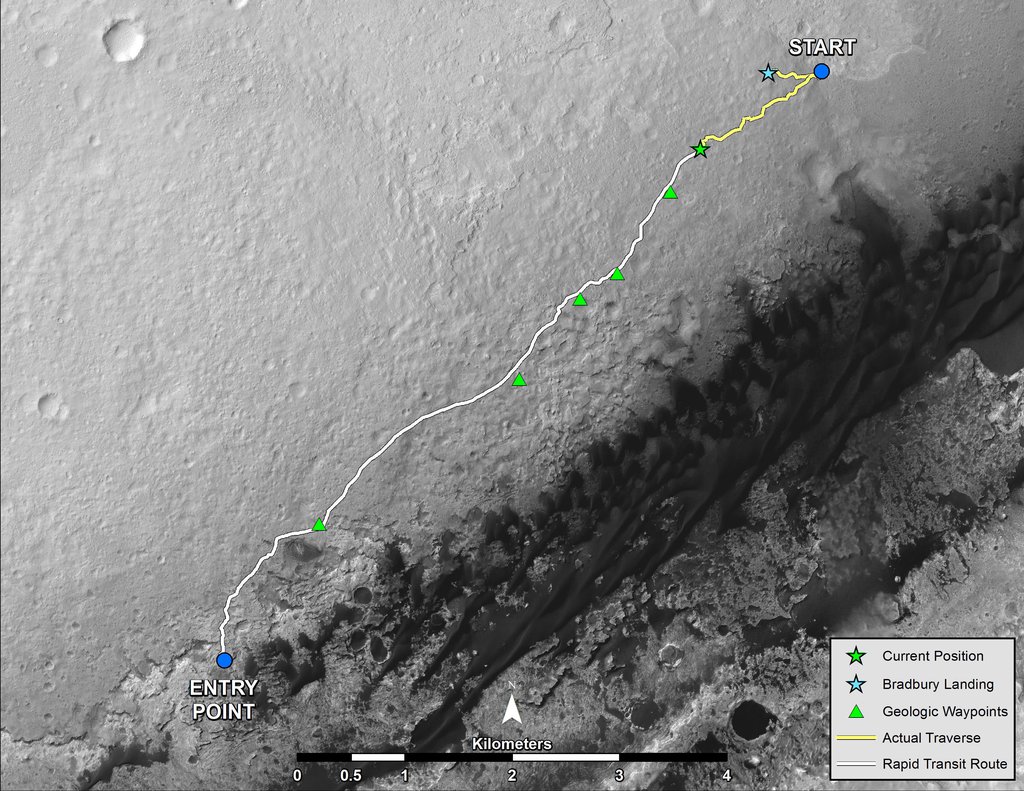 NASA's Mars rover Curiosity left the "Glenelg" area on July 4, 2013, on a "rapid transit route" to the entry point for the mission's next major destination, the lower layers of Mount Sharp. As of Aug. 27, 2013, NASA's Mars rover Curiosity has driven about 0.86 mile (1.39 kilometers) since leaving Glenelg, with about 4.46 miles (7.18 kilometers) remaining to get to the entry point. The rover's drive on Aug. 27, the 376th sol (Martian day) of the mission, was the first Curiosity drive using the rover's autonomous navigation capability to safely drive beyond the area that rover drivers on Earth could evaluate from images before the drive. The rover can analyze stereo images that it takes during the drive and choose the best path to continue driving.› Full image and caption
Credit: NASA/JPL-Caltech/Univ. of Arizona

For the first time, NASA's Curiosity Mars rover has used autonomous navigation, which enables it to cover more distance during each drive on the Red Planet.

PASADENA, Calif. - NASA's Mars rover Curiosity has used autonomous navigation for the first time, a capability that lets the rover decide for itself how to drive safely on Mars.

This latest addition to Curiosity's array of capabilities will help the rover cover the remaining ground en route to Mount Sharp, where geological layers hold information about environmental changes on ancient Mars. The capability uses software that engineers adapted to this larger and more complex vehicle from a similar capability used by NASA's Mars Exploration Rover Opportunity, which is also currently active on Mars.

Using autonomous navigation, or autonav, Curiosity can analyze images it takes during a drive to calculate a safe driving path. This enables it to proceed safely even beyond the area that the human rover drivers on Earth can evaluate ahead of time.

On Tuesday, Aug. 27, Curiosity successfully used autonomous navigation to drive onto ground that could not be confirmed safe before the start of the drive. This was a first for Curiosity. In a preparatory test last week, Curiosity plotted part of a drive for itself, but kept within an area that operators had identified in advance as safe.

"Curiosity takes several sets of stereo pairs of images, and the rover's computer processes that information to map any geometric hazard or rough terrain," said Mark Maimone, rover mobility engineer and rover driver at NASA's Jet Propulsion Laboratory, Pasadena, Calif. "The rover considers all the paths it could take to get to the designated endpoint for the drive and chooses the best one."

The drive on Tuesday, the mission's 376th Martian day, or "sol," took Curiosity across a depression where ground-surface details had not been visible from the location where the previous drive ended. The drive included about 33 feet (10 meters) of autonomous navigation across hidden ground as part of a day's total drive of about 141 feet (43 meters).

"We could see the area before the dip, and we told the rover where to drive on that part. We could see the ground on the other side, where we designated a point for the rover to end the drive, but Curiosity figured out for herself how to drive the uncharted part in between," said JPL's John Wright, a rover driver.

Curiosity is nearly two months into a multi-month trek from the "Glenelg" area, where it worked for the first half of 2013, to an entry point for the mission's major destination: the lower layers of a 3-mile-tall (5-kilometer-tall) mound called Mount Sharp.

The latest drive brought the distance traveled since leaving Glenelg to 0.86 mile (1.39 kilometers). The remaining distance to the Mount Sharp entry point is about 4.46 miles (7.18 kilometers) along a "rapid transit route." That route was plotted on the basis of images from the High Resolution Imaging Science Experiment (HiRISE) camera on NASA's Mars Reconnaissance Orbiter. The actual driving route, which will be based on images from Curiosity's own cameras, could be longer or shorter.

Curiosity's science team has picked a few waypoints along the rapid transit route to Mount Sharp where driving may be suspended for a few days for science. The rover has about 0.31 mile (500 meters) left to go before reaching the first of these waypoints, which appears from orbiter images to offer exposed bedrock for inspection.

"Each waypoint represents an opportunity for Curiosity to pause during its long journey to Mount Sharp and study features of local interest," said Curiosity Project Scientist John Grotzinger of the California Institute of Technology, Pasadena. "These features are geologically interesting, based on HiRISE images, and they lie very close to the path that provides the most expeditious route to the base of Mount Sharp. We'll study each for several sols, perhaps selecting one for drilling if it looks sufficiently interesting."

After landing inside Gale Crater in August 2012, Curiosity drove eastward to the Glenelg area, where it accomplished the mission's major science objective of finding evidence for an ancient wet environment that had conditions favorable for microbial life. The rover's route is now southwestward. At Mount Sharp, in the middle of Gale Crater, scientists anticipate finding evidence about how the ancient Martian environment changed and evolved.