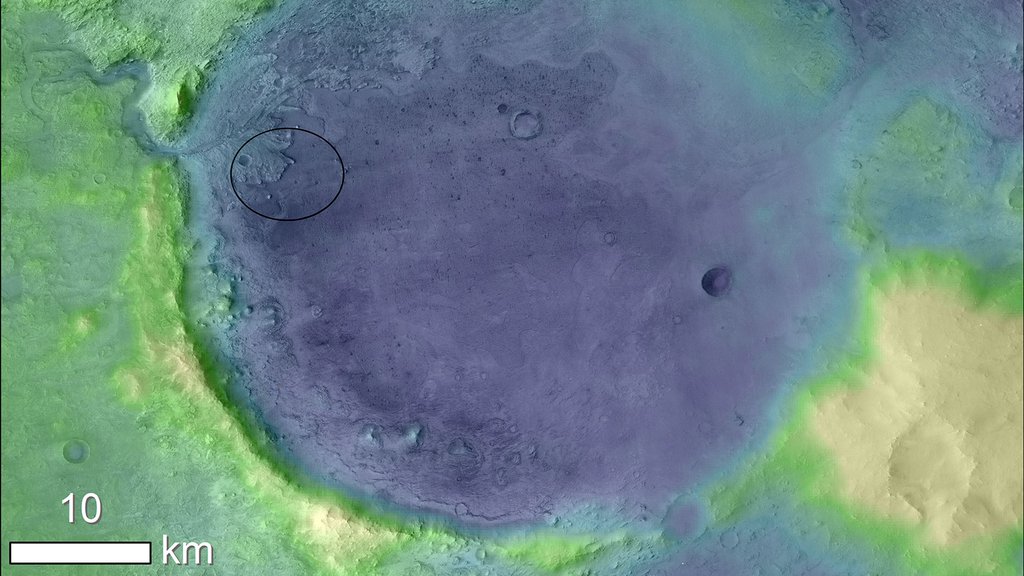 Lighter colors represent higher elevation in this image of Jezero Crater on Mars, the landing site for NASA's Mars 2020 mission. The oval indicates the landing ellipse, where the rover will be touching down on Mars. 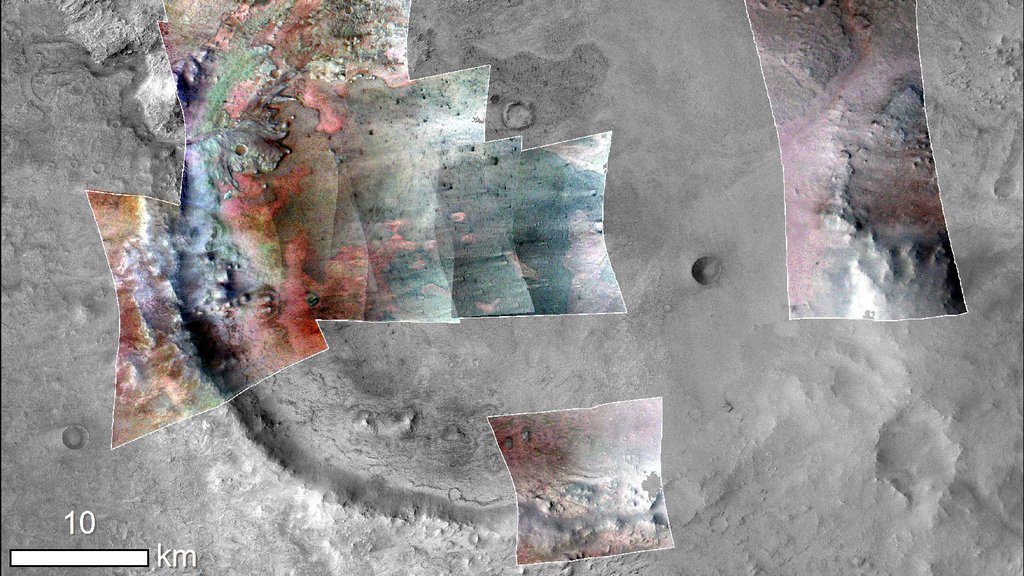 Color has been added to highlight minerals in this image of Jezero Crater on Mars, the landing site for NASA's Mars 2020 mission. The green color represents minerals called carbonates, which are especially good at preserving fossilized life on Earth.

A new paper identifies a ring of minerals at the rover's landing site that are ideal for fossilizing microbial life.

Scientists with NASA's Mars 2020 rover have discovered what may be one of the best places to look for signs of ancient life in Jezero Crater, where the rover will land on Feb. 18, 2021.

A paper published today in the journal Icarus identifies distinct deposits of minerals called carbonates along the inner rim of Jezero, the site of a lake more than 3.5 billion years ago. On Earth, carbonates help form structures that are hardy enough to survive in fossil form for billions of years, including seashells, coral and some stromatolites - rocks formed on this planet by ancient microbial life along ancient shorelines, where sunlight and water were plentiful.

The possibility of stromatolite-like structures existing on Mars is why the concentration of carbonates tracing Jezero's shoreline like a bathtub ring makes the area a prime scientific hunting ground.

Mars 2020 is NASA's next-generation mission with a focus on astrobiology, or the study of life throughout the universe. Equipped with a new suite of scientific instruments, it aims to build on the discoveries of NASA's Curiosity, which found that parts of Mars could have supported microbial life billions of years ago. Mars 2020 will search for actual signs of past microbial life, taking rock core samples that will be deposited in metal tubes on the Martian surface. Future missions could return these samples to Earth for deeper study.

In addition to preserving signs of ancient life, carbonates can teach us more about how Mars transitioned from having liquid water and a thicker atmosphere to being the freezing desert it is today. Carbonate minerals formed from interactions between carbon dioxide and water, recording subtle changes in these interactions over time. In that sense, they act as time capsules that scientists can study to learn when - and how - the Red Planet began drying out.

Measuring 28 miles (45 kilometers) wide, Jezero Crater was also once home to an ancient river delta. The "arms" of this delta can be seen reaching across the crater floor in images taken from space by satellite missions like NASA's Mars Reconnaissance Orbiter. The orbiter's Compact Reconnaissance Imaging Spectrometer for Mars instrument, or CRISM, helped produce colorful mineral maps of the "bathtub ring" detailed in the new paper.

"CRISM spotted carbonates here years ago, but we only recently noticed how concentrated they are right where a lakeshore would be," said the paper's lead author, Briony Horgan of Purdue University in West Lafayette, Indiana. "We're going to encounter carbonate deposits in many locations throughout the mission, but the bathtub ring will be one of the most exciting places to visit."

It isn't guaranteed that the shoreline carbonates were formed in the lake; they could have been deposited before the lake was present. But their identification makes the site's western rim, called "the marginal carbonate-bearing region," one of the richest troves of these minerals anywhere in the crater.

The Mars 2020 team expects to explore both the crater floor and delta during the rover's two-year prime mission. Horgan said the team hopes to reach the crater's rim and its carbonates near the end of that period.

"The possibility that the 'marginal carbonates' formed in the lake environment was one of the most exciting features that led us to our Jezero landing site. Carbonate chemistry on an ancient lakeshore is a fantastic recipe for preserving records of ancient life and climate," said Mars 2020 Deputy Project Scientist Ken Williford of NASA's Jet Propulsion Laboratory in Pasadena, California. JPL leads the 2020 mission. "We're eager to get to the surface and discover how these carbonates formed."

Jezero's former lake shoreline isn't the only place scientists are excited to visit. A new study in Geophysical Research Letters points to a rich deposit of hydrated silica on the edge of the ancient river delta. Like carbonates, this mineral excels at preserving signs of ancient life. If this location proves to be the bottom layer of the delta, it will be an especially good place to look for buried microbial fossils.

The Mars 2020 rover will launch in July or August 2020 from Cape Canaveral, Florida. The Mars 2020 Project at JPL manages rover development for the Science Mission Directorate at NASA Headquarters in Washington. NASA's Launch Services Program, based at the agency's Kennedy Space Center in Florida, is responsible for launch management.

For more information about Mars 2020, go to: